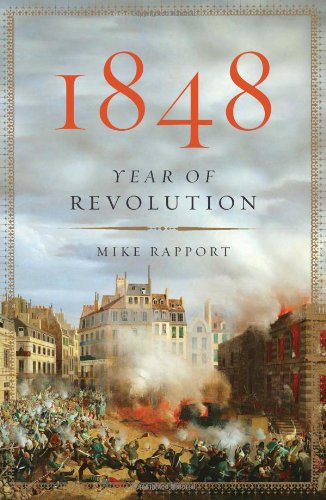 You Say You Want a Revolution

What changed—and what didn't—in the revolutions of 1848, and why it still matters.
June 2009

The year was 1848, and Europe was burning: The fires of revolution had flared up in country after country, each blaze erupting separately yet all feeding on the same fuel of social unrest and economic instability. It made little difference whether local governments reacted quickly and sternly, or slowly and gently. One way or another, the revolution always seemed to grow. With the pressures of the industrial revolution, food shortages, and increased populations, Europe was dry kindling in 1848, and all it needed was a spark.

How these revolutions were lit, stoked, and eventually extinguished is expertly explained by Mike Rapport in his new book, 1848: Year of Revolution. A lecturer in history at the University of Stirling and author of several well-received books on 19th-century Europe, Rapport draws on eyewitness accounts, political memoirs, and a wide range of secondary sources to produce a clear and persuasive narrative.

The more one reads about the topic, the more one realizes that what makes the year 1848 so memorable is its peculiar combination of faceless crowds and strong leaders. The same combination is what makes Rapport's 1848 so interesting to read. From Bonaparte to Bismarck, Marx to Metternich, powerful figures tried to control and ride the masses that were surging up against the old order. On January 29, 1848, for example, Alexis de Tocqueville warned the Chamber of Deputies: "I believe that right now we are sleeping on a volcano … . Can you not sense by a sort of instinctive intuition &helip that the earth is trembling again in Europe?"

Tocqueville's premonitions were justified. Within months, revolutions would erupt in Paris, Milan, Venice, Naples, Palermo, Vienna, Prague, Budapest, Krakow, and Berlin. Across Europe, peasants, serfs, artisans, and workers were struggling. One study in Germany found workers to be earning less than half the income required to live decently. In Berlin, "a city of 400,000 people by 1848, there were no less than 6,000 paupers &helip 4,000 beggars, 10,000 prostitutes, 10,000 'vagabonds' (meaning people with no fixed income) and, it was thought, a further 10,000 engaged in criminal activity." As one Prussian minister wrote, "the old year ended in scarcity, the new one opens with starvation. Misery, spiritual and physical, traverses Europe in ghastly shapes—the one without God, the other without bread. Woe if they join hands!"

Rapport insists that this "social question" was the force behind the uprisings. While intellectuals would at times attempt to capitalize on social frustrations, using working-class anger to push for this or that ambitious agenda, the average rioter simply wanted bread on the table and saw violence as one of his few remaining options. As Rapport convincingly argues, the "collapse of the conservative order &helip was a crisis of 'modernization' in the sense that the European economy and society were changing, but they had not yet been adequately transformed to absorb the intense pressures of population, and, above all, to address the desperation of artisans, craft workers and peasants."

The year's first violent confrontation erupted in Milan, in January—over a cigar, oddly enough. The area was under the control of Austria, and young Milanese nobles had grown increasingly resentful of their limited opportunities under their German-speaking rulers. With luxury taxes a major source of income for the Austrians, the Italians decided to organize a boycott of tobacco. And so, on New Year's Day 1848, the people of Milan gave up smoking. In retaliation, "the Austrian garrison, encouraged by their officers, took up smoking with gusto, ostentatiously waving their cigars in the faces of the citizens."

It would not be long before the situation exploded. On January 4, a riot erupted after a citizen had tried to knock a cigar out of the hand of a particularly obnoxious soldier. Six civilians were killed. By the end of the month, similar eruptions would take place in the south, where "the Sicilian countryside was literally in flames as peasants joined the revolution, torching tax records and land registers in village halls."

Before the year was out, Paris, Vienna, Budapest, Prague, and Venice would see their own revolts. As tempting as it might be to describe the revolutions as spreading across Europe, however, it's important to note that the early riots in Italy didn't exactly cause the later riots elsewhere. Rapport emphasizes both that there was something in the air, across Europe, ready to explode, and that each local rebellion had its own particular causes.

In the end, unable to relieve the food shortages, economic downturns, increased populations, and political stagnation, local rulers were forced to loosen their reins and entertain the idea of such liberal reforms as constitutions and universal male suffrage. The impact of all this was immediate and profound: "In three short days," exclaimed the poet Georg Herwegh in Paris, "you have broken with the past and raised the banner for all the people of the earth." German liberals declared a Völkerfrühling—the Springtime of Peoples—a name, as Rapport notes, "pregnant with the liberating hopes of the revolutions, when national aspirations suddenly seemed possible."

The enthusiasm created by these early uprisings, however, would not last long. For the initial political victories won by rioters and revolutionaries to bear fruit, liberals needed to be united against the conservative governments that, although weakened, still held power. Unity, however, is exactly what the liberals failed to achieve. Some in the middle class, for example, encouraged moderate forms of rebellion, hoping to loosen the grip of absolutist rule in their countries. Working-class radicals, however, tried to fan the small fires of local revolts into continent-wide revolution, hoping to turn 1848 into another 1789.

Split in two, the liberals ended up helping the conservatives. Radicals and "the threat of social revolution and working-class disorder allowed conservatives to feed on the widespread public fear of social disintegration. Anyone who had anything to lose from further chaos was drawn progressively away from the political center to support the forces of law and order." Eventually, the conservatives would use these techniques to regain popular support, but, from the beginning, they were able to survive by keeping their strength united.

One figure who capitalized on liberal infighting was Otto von Bismarck. Distressed at the fall of the old absolutism, the newly elected representative to the Prussian parliament worked hard to brand liberalism as "the ideology solely of the propertied, urban middle class—a narrow social group." Peasants, artisans, and retailers, Bismarck argued, were betraying their own best social and economic interests when they rallied around liberalism. The strategy worked, and in the end, popular support became, as Rapport notes, "enrolled behind the traditional elites, an alliance that would be invincible against liberalism and radicalism."

Although many of the reforms sought by revolutionaries would not be achieved until the next century, the struggles of 1848 did bring the abolition of serfdom, compulsory labor, and dues for the peasantry, as well as a limited expansion of male suffrage. The lessons of 1848, however, are larger than a list of established rights and abolished injustices. As Rapport rightly contends, the revolutions of 1848 focus our attention on a problem that still confronts modern societies today: how to reconcile social justice with individual liberty. It was this tension that shattered the fragile unity of the revolutions' first supporters. Liberals and radicals squabbled over individual liberty and social justice, while the peasants, once their immediate situation improved, sided again with the traditional authority.

Without the widespread frustration of peasants, artisans, and lower-class workers who broke under the pressures of the industrial revolution, the uprisings of 1848 would never have occurred. But Rapport reminds us that the revolutions were also the result of political thinkers and revolutionaries who sensed that governmental reform might indeed be possible if enough people were willing to fight for it. 1848, therefore, is a nuanced look at a time when Europe was struggling to resolve the contradiction between the changes promised by Enlightenment philosophy and the new economic realities brought about by the industrial revolution.

In November 1852, Louis-Napoleon Bonaparte was crowned emperor in Paris, closing the book on France's Second Republic and the last vestiges of the revolutions that began in 1848. The fires of revolution had all but died out. Still glowing underneath the rubble, however, were the embers of nationalism, socialism, and communism that would flare up time and again until the end of the 20th century. As Mike Rapport shows in 1848, the year of revolution scorched an indelible mark on the psyche of Europe.

Ryan Sayre Patrico is a junior fellow at First Things.