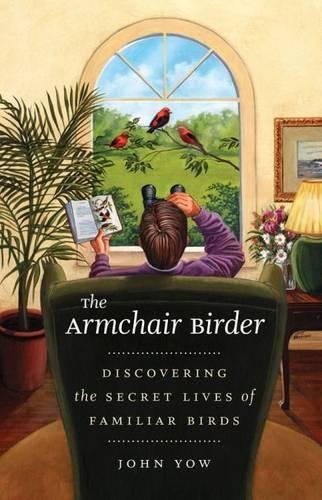 Birding from the Back Porch

No need for travel to exotic climes.
June 2009

Hacking through jungles, freezing in Arctic seas … it seems there are no remote areas that passionate birders won't venture to in hopes of seeing something exciting. But writer John Yow finds he can see plenty of interesting birds by journeying no farther than his back porch deck chair amid 40 acres of northwestern Georgia woods. Yow is a self-confessed "armchair birder," which he defines as a person "too lazy to get up and 'go birding.' "

In his charming The Armchair Birder: Discovering the Secret Lives of Familiar Birds, Yow shares folklore, life habits, and enjoyable personal anecdotes about 42 species of birds that are commonly seen in and around the backyard. As he puts it, "What I do, mostly, is hang feeders and watch the birds that come to me." When he spies a new species, he is, as Keats says, "some watcher of the skies / When a new planet swims into his ken."

Yow's book is pleasantly organized by season—Georgia seasons, that is—with roughly ten species for each. In the southeast, this means you get the Sandhill crane in winter and the Carolina wren in spring. While this is no less engaging for readers in other portions of the country (like this midwestern reviewer) it does require that you orient yourself to his locale.

On those terms, Yow gives us a porch-side seat for the rich and colorful doings of the bird world. No matter if he is cheering on the tanagers as they decimate the pesky wasp population in his backyard or decrying the much-maligned brown-headed cowbirds and their parasitical habits, Yow's observations are humorous and informative.

As well as relying on his own backyard observations, he heavily mines numerous sources for his essays: "If you're like me, knowing what [the birds] look like just whets your appetite for knowing what they're up to." Yow prefers the classic ornithology experts, such as Arthur Cleveland Bent, Edward Howe Forbush, and John James Audubon, spiked with plentiful updated info from The Birds of North America Online. In a sense, this book is a digest of information culled from these sources, framed by Yow's anecdotal encounters with the birds.

In each five- or six-page essay, Yow explores courtship rituals, nesting habits, and his own experiences with a particular bird. He often starts his chapters with a little discourse on how the bird got its name, coupled with some mythology.

Of the belted kingfisher, for example, Yow writes that its scientific name, Megaceryle alcyon, comes from the ancient Greek name for the birds, expressive of their belief that the fisher birds nested on the open sea. Hence the term "halcyon days": the Greeks believed the gods smiled on kingfishers during nesting time and calmed the waters for "days of peace and well-being." In Greek mythology, Alcyon was one of the seven daughters of Atlas, known collectively as the Pleiades (for whom the star cluster is named). Grieving the loss of her husband in a shipwreck, Alcyon threw herself into the sea. The gods changed them both into kingfishers. After reading Yow's essay, I'll never look at a kingfisher without a sense of these associations.

More ornithological mythology: Bluebirds were believed by the Navajo to serve as heralds of the rising sun and to "stand at the door of the house of the creator." They became sapphire-colored (the Pima say) by bathing in a blue lake. Or this: The scientific name for turkey vulture—or "buzzard," as Yow prefers—derives from Greek kathartes, which means "purifier." Appropriate, as buzzards clean up the dead stuff.

Even as an avid reader of bird books, I learned some new facts. The Sandhill cranes I see migrating overhead in the Chicago suburbs make a stopover at Jasper-Pulaski Fish and Wildlife Area in northwestern Indiana to and from Georgia and Florida. The wood thrush, whose gorgeous song I enjoy when it migrates through my neighborhood in the spring, has large, light-sensitive eyes. Because of this, it migrates at night and prefers the gloom of forested areas.

And speaking of migration, Yow says that cell towers cause the death of millions upon millions of birds a year, most of them nighttime migrating songbirds like the rose-breasted grosbeak. Think of that the next time you text a friend! Another interesting fact, and less depressing: Ospreys are so mild in disposition, and their nests are so large (up to 10 feet high, and remodeled for as many as 40 years) that they have "apartments" where other birds, such as starlings or grackles, build their nest. Birds as landlords? Who knew?

Yow makes plenty of personal analogies, including one I found particularly entertaining, comparing the gluttony of cedar waxwings to his own piggishness over his mother-in-law's pot roast and mashed potatoes. Some of his writing is pure delight, as is this about chimney swifts: "Such a comfort to see the chimney swifts darting through the air around the house as we sit on the front porch these summer evenings. I'm sure they're doing a lot better job at mosquito control than our citronella candles. And such a pleasure to hear their lovely twittering as they nest and raise their young inside our chimney. When they fly in and out, their wingbeats sound like distant thunder. I've been fooled more than once into thinking maybe a storm was coming to break a summer drought."

What comes across clearly in Yow's book is the amazing diversity of common backyard birds in appearance, song, life habits, and appetite. The common crow, Yow writes, is "utterly, remarkably black" and brings with it "the chill of the graveyard at midnight." "Wasn't it a crow that helped work the witch's will in Disney's Sleeping Beauty, crows that led the onslaught in Hitchcock's The Birds?

If adaptability is worth anything, crows seem to have it in spades. Crows, despite people's almost universal hatred, are thriving, Yow says, because they can eat almost anything—junk food, roadside carrion, the eggs and young of other birds—and can live anywhere from farms to forests to garbage dumps. If a crow wants to eat something in a hard shell (clams, nuts, turtle hatchlings), it carries it up high, then drops it on a rock to break it open. Or, sometimes, crows drop it on the road and wait for passing cars to crack it open. They can store food for later usage in cache sites, where the crow digs a hole, drops the food inside, and covers it with grass or plant debris. Crows live 20 years or more, in extended families, where eight or nine members of the group work together to raise the kids.

Another fascinating essay looks at the contradictory habits of great blue herons, which are community-minded when breeding and solitary-minded when not. Their colony nesting habit is particularly unattractive. Yow observes the first-year nests "are so thinly latticed that the pair's eggs can be seen from below"; the nests are then remodeled year after year, held together by "their accumulated filth." No wonder Audubon called the rookeries "dismal retreats!" The young void excrement over the edge of the nest, followed by uneaten decaying fish pushed aside: enough to keep the most avid blue heron fan from getting too close. Yet, after the rigors of breeding season, "the great blue passes its days in quiet watchfulness." A lovely image.

The Armchair Birder is liberally illustrated with prints from John James Audubon's Birds of America, but they are disappointingly reproduced in black and white. Ah, well.

Wherever you will be this summer, Yow's book is a good reminder to break out an iced tea or cold beer, dust off the lawn chairs, and spend some time outside with a field guide and pair of binoculars close at hand. Surely no season could be better spent than in quiet meditation, observing the ever-changing tapestry of bird life in our own back yards.

Cindy Crosby is the author of By Willoway Brook: Exploring the Landscape of Prayer and a contributor to the study guide Creation Care. She is co-editor of two volumes of the Ancient Christian Devotional ( Cycles A and C).