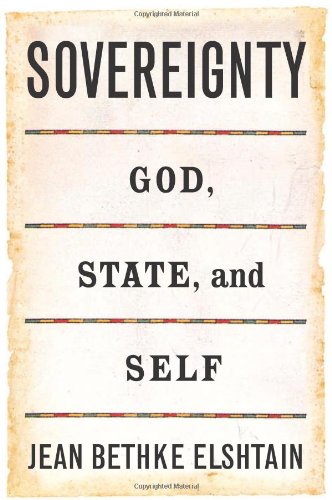 University of Chicago political philosopher and maternal feminist Jean Bethke Elshtain has devoted her academic career to pointing out inextricable ties between politics and ethics. Among her many books are Public Man, Private Woman: Women in Social and Political Thought; Who Are We? Critical Reflections, Hopeful Possibilities; and Just War Against Terror: The Burden of American Power in a Violent World. In 2005–2006, she delivered the prestigious Gifford Lectures in Scotland, following in the footsteps of William James and Hannah Arendt. In them, she considered the topic of what would become Sovereignty: God, State, and Self, published by Basic Books in 2008. Agnieszka Tennant spoke with Elshtain—her former academic advisor in the master's degree program in international relations at the University of Chicago—about questions prompted by the book. This interview is an edited excerpt from their conversation.

In Sovereignty, you observe the following irony: "In our own liberal society at the moment, and in most of the Western democracies in general, we are pursuing a paradoxical project: We are most aware of those with physical and mental disabilities; we want to provide them access. Yet at the same time, our most enthused-about and ideologically fraught projects aim at creating a world with no such persons in it." How did we arrive at the point of convergence of such opposites?

These kinds of opposites have been embedded in the great Western project from the beginning. If you put a premium on certain kinds of developed capacities—let's say, those who can enact projects of freedom, who have achieved a certain level that we recognize as definitively human—and tethered to that you have philosophies that measure us by our capacity to engage in rational operations, then those who can never maximize their capacity and who lack certain capabilities are going to be a huge problem. You can see that in the social contract literature. John Locke doesn't know what to do with idiots and imbeciles, in the tender language of the day. Where do they belong? They can't sign the contract. They're outside of the rationally interacting universe. Once you set that in play, an ongoing devaluation of certain categories of people takes hold.

Because we want to be compassionate and we feel badly about this, we say we've got to make things fairer for these kinds of people. I don't want to negate the importance of those projects for access. But even as those go on, at the present moment we're rapidly aiming for a more and more strenuous norm of perfection, with the promise and the possibilities of eugenics—or positive genetic enhancements, as we're supposed to call it. We can get more people of an ideal type, where we try to tweak off the bad bits of the genome. That's why a number of ethicists from the Netherlands have said that if you're a parent of a child with disabilities in a liberal Western democracy, particularly if they're mental disabilities, you have reason to be worried—precisely because of the devaluation that's placed on such human beings. Think about what it says to an adult with Down syndrome that the society in which she lives aborts 90 percent of Down pregnancies, and that in an ideal world there wouldn't be any like her left. That says something about how she is valued.

Isn't it possible that a certain kind of generosity and other-mindedness is also at work in the tendencies you see as unchecked notions of self-sovereignty? For example, do you distrust proponents of cloning when they tell us that they have the good of humanity in mind? Do you dismiss the claims of various would-be parents who report they decided to have an abortion not only out of concern for their own lives, but also out of concern for what the lives of their offspring would be like?

I think that's a very dangerous tender-heartedness, a misconstrued understanding of where compassion and empathy ought to lie. There's a wonderful discussion in Walker Percy's novel The Thanatos Syndrome of a Catholic priest's experiences in Nazi Germany in the 1930s, where he heard all the arguments put forward already then about how in the name of compassion we had to end the suffering of people with disabilities. "If you were them, you would want us to kill you," was the reasoning. The first Nazi programs to eliminate the "unfit" targeted people with disabilities rather than Jews.

The notion of aborting a Down syndrome pregnancy because of what the child would go through is an argument I'd strenuously resist. It suggests that one has no experience with or knowledge of people with Down syndrome who are brought up in families as participants in their communities. There was a story in The New York Times not long ago about a sister who spent her life with a brother with Down, whose parents were told he was a Mongoloid idiot who'd live to be ten. Well, he is now fifty. In the past, of course, children with Down often didn't live past ten, because they were put in horrible places and ignored.

People who live among us with multiple disabilities overwhelmingly are happy they're alive. If they didn't want to be here, you'd think there would be an unusually high rate of suicide among them, those who can think through that and are physically capable of it. But we don't see that. You can see mutual enrichment that comes from our encounters with them. And yet I think for some people there's a bit of a stigma attached: I'm not as perfect as I hope to be if the child I brought into this world has problems; it's embarrassing. I think some of that still lingers too.

What do you say to the argument that allowing people with disabilities onto this planet places an undue burden on society?

That's the old utilitarian calculation. It's entirely illegitimate because it suggests that the strong and able-bodied have more right to the things of the earth than those who are weak and not able-bodied. If you believe in the moral quality of persons, that's obviously not an argument you can credit. In practice, it's also a very dangerous argument because it's been made historically for warehousing people or euthanizing people. The Nazi programs had prudential utilitarian reasoning as well. Plus I suspect it's the powerful and the strong and the rich who use up more of the world's resources than the weak and the not-so-powerful. It's a matter of asking ourselves: Who do we welcome? Who do we leave out? Are we the kind of community whose members extend themselves in friendship and recognize the moral worth of beings who don't look like us and don't act like us and cannot achieve like us and who will have claims on our care for their entire lives?

Twelve years ago, you adopted the 3-week-old son of your daughter and son-in-law, who live with mental retardation. How did you personally have to negotiate competing sovereignties in that decision? How much control have you had over that situation's origins and your response to it?

If we think of its origins, they lie in our daughter and her then-husband having a child when the advice of everyone was that they probably couldn't handle it. They obviously wanted to do what normal people do. They were both relatively competent, able to keep an apartment and so on, and thought there was no reason why they couldn't raise a child. But it was very clear that they couldn't after a few weeks: The baby wasn't being given assistance and interaction, wasn't being given the attention it needed. It was obvious that the baby had to be somewhere else, and we moved to become Bobby's guardians and then his parents.

As to what there was to negotiate, that was the easy part. If our daughter and son-in-law had really been making a huge effort, it might have been different, but it was clear they just couldn't do it. They experienced primarily relief when the decision was made, and in a way that was a relief to us because it seemed to be a benefit to them as well. Then the complicated part came: rethinking your lives. We hadn't imagined we'd be doing anything like this at our age, renegotiating issues of work, presence, time, money—all the usual stuff that comes into play with parenting. At first I was thinking abstractly: I didn't know how to do this. But when it became a concrete reality, of course my husband and I could. There he is, this beautiful little kid. What are you going to do? Obviously you're going to be a parent. It becomes not so much a series of decisions as reacting to the concrete reality of the situation—the presence of a being who needs time and attention. How do you respond to that? What do you do about it? After he'd been with us for a short time, we couldn't imagine our lives without him. Being available to, or in the presence of, or responding to is very much how we live our lives. The question would be, Are we prepared to respond? Or are we trying to shut this new reality away? Because it seems impossible or overwhelming. There's nothing like a child to remind you that you're not a sovereign self.

The idea of human dignity seems to have taken a beating lately. Harvard psychologist Steven Pinker ridiculed it in his article "The Stupidity of Dignity" in The New Republic. His target was the President's Council on Bioethics report "Human Dignity and Bioethics," to which you contributed.

You're right, there's an assault on the very notion of dignity. Pinker knows, because it came up in the discussion when I was sitting next to him, that human dignity was very much in play for those who wrote the Universal Declaration of Human Rights, given what they took to be assaults on human dignity by the Nazi regimes and the Soviet tyranny. Hitler never defended human dignity; it was about race privilege, about being fierce beasts that go out and devour the weak.

Pinker has taken an antiquated notion of dignity as naming a certain status that sets you apart from others. That's not how people speak of dignity now, and he knows it. If you acknowledge that all human beings have a dignity that must not be assaulted, you're reminded of your common humanity. Human dignity entails a leveling, a moral equality that offends certain sensibilities. If you consider those who have launched assaults on human dignity historically, they've often believed they can only remain lofty if others are a lot lower. But dignity draws us together.

Agnieszka Tennant is a doctoral student in political science at Northwestern University.