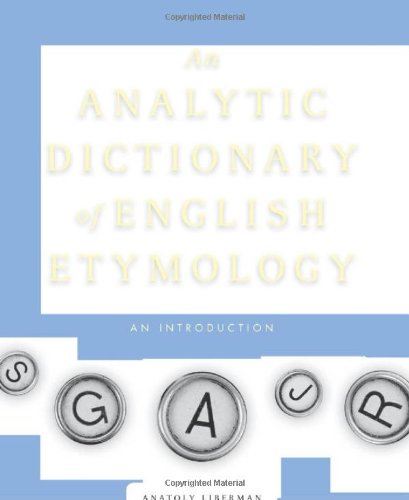 How the English language evolved.

People are given to asking we linguists where a word came from: "What is the origin of fork anyway?" The truth is most of us have to look it up in a dictionary like anyone else. Modern linguistics examines the workings of grammar; enthusiasts preoccupied with the origins of words are regarded with genial disdain, as an entomologist might look upon amateur butterfly collectors.

That isn't really fair, as tracing the origins of words combines deductive reasoning, detailed engagement with the intricacies of sound change, command of several languages ancient and modern, and an awareness of history. The words five, finger, fist, foist, Pentecost, and quintessence can all be traced back, for example, to the word for five, penkwe, in a language spoken by nomads who migrated from southern Ukraine or Turkey into Europe about eight thousand years ago. Linguists have reconstructed that language, termed Proto-Indo-European, by comparing words in its dozens of descendants in Europe, Iran and India. Little did its speakers know that their penkwe would also provide the word for what we know as the drink punch: it originated with five ingredients, you see.

Nevertheless, more than occasionally, one finds a word's etymology given as "origin unknown," as if the descent of the word were as baffling as the enigma of Stonehenge. In the introduction to his peculiar but fascinating An Analytic Dictionary of English Etymology, Anatoly Liberman points out that typically a great deal of serious research has been devoted to the origin of such words. But when no single hypothesis has become accepted as canonical, compilers of etymological dictionaries tend to apply the "origin unknown" stamp. Only diehard specialists will recognize how misleading that label can be.

What enables this is the very fact that etymology is not academicized. "Its practitioners do not meet at special conferences, few manuals summarize the latest contributions to the subject, and it is taught (when ...