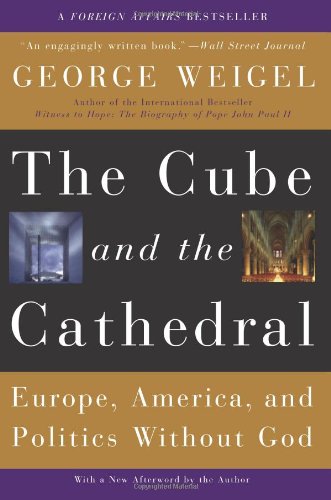 The book does not leave the reader without a sense of hope. More than advancing his own personal plan for revitalization, Weigel exposes points of light that are already shining. Numerous lay ecclesial movements and religiously inspired free associations are burgeoning in Europe. Weigel makes specific mention of Focolare, Opus Dei, the Sant'Egidio Community, the Emmanuel Community, and Regnum Christi. The effectiveness of movements like these—an effectiveness that baffles secular political pundits—simply proves that John Paul II was right: culture matters. Culture is the underlying fabric that supports a just and free society. Culture also holds the potential of toppling regimes that aim to trample justice and freedom underfoot. Any culture, however, is bankrupt without a memory to sustain it. And that is precisely what Europeans have jeopardized by failing to include, among the 70,000 words that make up the EU constitution, the one word which, more than any other, expresses the key to their civilization.

The only minor lacuna in Weigel's analysis is his insufficient attention to other historical events that may well have contributed to the current Christophobia. I have in mind, for example, the ravages of the Thirty Years' War—a brutal and devastating conflict between Protestants and Catholics in the 17th century—and the botched attempts in 1960s' France at a "fusion of the Christian impulse with secular and political action," in the words of the then–Cardinal Ratzinger. Events such as these convinced many Europeans that Christianity and politics are mutually exclusive, and may have had a more direct impact on common folk than did Ockham's nominalistic turn. A consideration of such events, however, would in no way weaken Weigel's argument; indeed, they would strengthen it all the more. This is a most important book.

Although the Holy Spirit deserves the ultimate credit for the selection of a pope, the prospect of electing a European who himself has demonstrated a keen understanding of the issues confronting Europe must have influenced the deliberations of the College of Cardinals. Barely two weeks before he ascended the throne of Peter, Cardinal Ratzinger maintained that the culture of today's Europe "constitutes the most radical contradiction, not only of Christianity, but also of the religious and moral traditions of all humanity." And it is a contradiction, Weigel argues, that could have fatal consequences.

The Cube and the Cathedral: Europe, America, and Politics Without God is available from Amazon.com and other book retailers.

CT's full coverage of the death of Pope John Paul II and the election and analysis of Benedict XVI is collected on our website.