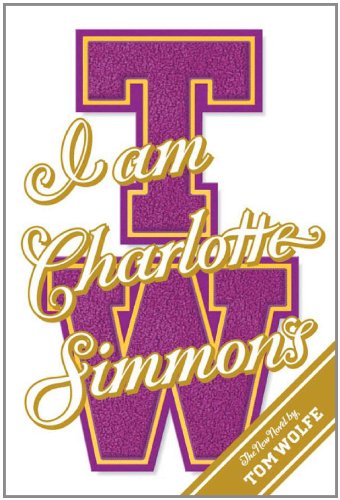 The social value of the novel is in its unique ability to present human choices in all their variety and complexity. Plays and films also can show such choices, of course, but the novel has the advantage of easily allowing us to enter a situation from a particular character's point of view, or even to hear and consider their thoughts. All of this allows us to identify with the character within the situation and judge how we would act if placed in a similar dilemma. There can, however, be too much of a good thing, and that is what happens in Tom Wolfe's new novel, I Am Charlotte Simmons.

In his third book-length fiction, the celebrated journalist closely considers another aspect of American society, as he did in his first two novels, Bonfire of the Vanities and A Man in Full. In this case, the ostensible subject matter is the American system of higher education, but as in his first two books he is actually after bigger game. Wolfe intends nothing less than to analyze the basic motives behind all human behavior.

The story begins as Charlotte Simmons, the valedictorian of her high school class in rural western North Carolina, wins a full academic scholarship to prestigious Dupont University, a fictitious Ivy League institution. Charlotte quickly finds that her conservative, evangelical Christian, small-town ways have left her entirely unprepared for this elite realm—not academically, for she's a brilliant student, but socially. Charlotte is scandalized by the coed dorms, where even the bathrooms are shared by individuals of both sexes, and by the general atmosphere of sex and drugs and rock and roll that seems to make up contemporary college life.

Charlotte's simplicity, intelligence, and unadorned natural beauty attract attention from three very different—but all highly ambitious—young men. A successful basketball player who has coasted all his life admires her academic and intellectual achievements; a reporter for the school newspaper, who sees himself as a future world leader, is attracted to her intellectually, physically, and emotionally; and a Big Man on Campus fraternity leader, who can and does easily "hook up" with any girl he wants, amazes everyone by befriending her in a shockingly chaste manner.

Her relationship with this latter individual brings Charlotte a certain amount of attention on campus, as the largely wealthy and jaded denizens of the campus wonder what the great Hoyt Thorpe sees in this poorly dressed and coiffed little academic geek from Nowheresville, USA.

The reader is likewise given ample opportunity to puzzle over this riddle, as Hoyt completely foregoes in her case the easy-sex, hooking-up way prevalent on the campus. Although he still seems to be hooking up with other girls, his pursuit of Charlotte is both ardent and gentle, and sexually he doesn't press her any farther than she is willing to go. Why, except for the wenching, he is almost a … gentleman!

Here and elsewhere in the book, Wolfe introduces several allusions and references to Flaubert's Madame Bovary, with Charlotte in the position of Flaubert's bright but naïve country doctor, Charles. Deeper and more organic, however, are the book's similarities to several excellent 18th-century English novels, especially those of two superficially very different writers, Samuel Richardson and Daniel Defoe. Both of those authors were masters of the realistic depiction of female-virginity-in-peril scenarios, with Richardson the great architect of virtue rewarded and Defoe equally brilliant at depicting fallen women.

An even closer model, however, is Henry Fielding's moving and utterly wonderful final novel, Amelia, in which the lovely, decent, truly Christian title character is brought to the brink of ruin by her profligate husband, Captain Booth.

Wolfe's story, while rather charming in its final irony (which I shall not reveal here) and sharp observations of contemporary American life, is more cynical and less hopeful than any of these, and the reason lies in Wolfe's very different ideas about what drives human behavior and indeed whether people can really be said to make free choices in any meaningful way.

To consider this theme explicitly, Wolfe introduces the concept of sociobiology and a discussion of the chemistry of the human brain, through Charlotte's attendance in a high-level neuroscience class taught by a Nobel Prize-winning research professor.

Here Charlotte and her creator explore the latest advances in neuroscience and sociobiology, which provides a scientific basis for a notion that Wolfe has long purveyed: that the fundamental motive behind most human behavior (after all of our direct survival endeavors) is the pursuit of social status. This mission is wired into our very brains, Wolfe has suggested, because of the evolutionary advantage it brings. (Social hierarchies, one might surmise, encourage people to be both orderly and ambitious.) A classroom lecture on the neuroscientist José; Delgado allows Wolfe to present the following argument: