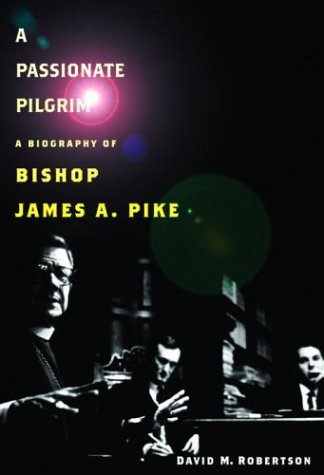 Be Careful What You Pray For

The strange tale of the controversial Bishop Pike and his fatal quest for relevance.
August 2004

For those who measure significance by media attention and celebrity status, the story of Bishop James Pike is a cautionary one. During his peak in the Fifties and Sixties, Pike was one of the most recognized Christians of his time, on par with Bishop Fulton Sheen and Billy Graham. From 1955 to 1961, ABC ran a successful Sunday–afternoon talk show hosted by the bishop, whereas both Sheen and Graham failed at weekly shows. Gracing the cover of Time, holding press conferences with Martin Luther King, Jr., giving provocative quotes to reporters, and enjoying a long run as a bestselling author, Bishop Pike was the public face of Christianity for many in America.

Which is all the more sobering considering how thoroughly he has disappeared from our cultural radar. David Robertson's biography, A Passionate Pilgrim, sets out to bring Pike back into the conversation. The subject must have sounded ideal for a biography—the story of an outspoken, thrice–married celebrity Episcopal bishop who prophetically voiced support for progressive causes, questioned the church's doctrines, experimented with drugs, dallied with sé;ances, and died in the Israeli wilderness—but one gets the impression that Robertson found filling in the details less than inspiring. Pike's inconsistencies, his alcoholism, his womanizing, his sophistry in getting out of jams, his overspending (both institutional and personal), his narcissism, and the damage to those around him—especially the suicides of his eldest son, one live–in lover, and the attempted suicide of one daughter: all this makes for a punishing chronicle that gets darker as it goes.

Those who remember Pike as a liberal leader may be surprised to hear that he began his career as an agitator on the right. From his first pulpit in Poughkeepsie, New York, down the street from Vassar, he railed against a liberal chaplain next–door and criticized the university's faculty for being "Unitarian, humanist, materialist, and Marxist." He even organized talks on campus for browbeating evangelists. Not always playing fair, Pike eventually got the chaplain fired and raised his visibility enough to get offered a more prestigious job: chaplain at Columbia University and chairman of the religion department.

In 1952, Pike moved next door, becoming dean of the cathedral at St. John the Divine. To be dean at the world's largest cathedral in the heart of Manhattan is a plum position, and Pike made the most of it, with superb instincts for working the media. He picked a fight with the Catholic bishops over their attacks on Planned Parenthood and their opposition to birth control. When asked to receive an honorary doctorate from Sewanee in Tennessee, he first accepted and then publicly turned it down after finding that the university did not admit African Americans into their seminary. Characteristically, Pike released his letter to the New York Times before it was delivered to Sewanee's trustees: they heard the news when reporters called for reactions.

He also publicly challenged Senator Joseph McCarthy's claim that 7,000 U.S. pastors were part of the Kremlin's conspiracy. When newly elected President Eisenhower backed up Pike, the scales began to tip the other way for McCarthy and his movement.

It was at St. John's that ABC's "The Dean Pike Show" was launched (later changed to "The Bishop Pike Show") and he became a national figure. Every Sunday, three to four thousand filled the sanctuary to hear him preach. Here Pike discovered his vocation as an author, usually popularizing other's thoughts but having the knack for catching people's attention. In his new role as spokesman for the faith, Pike strove to make the church "relevant" to the culture. He became an advocate for civil rights, the poor, women's ordination, abortion, and homosexual rights, and explained new ideas in theology to the masses. While many saw him as an enemy of orthodox Christianity, Pike saw himself as a passionate defender of the church. There is a reason he was asked to offer a prayer at a Billy Graham crusade. Throughout his career, he wanted people to encounter God by stripping away unnecessary barriers to the faith. Of course, how one defines "unnecessary" makes all the difference.

Despite frequent rumors of heavy drinking and womanizing, his name was put forth and approved by the diocese of Northern California to become their bishop. By then Pike needed to mount a full–scale campaign in the house of bishops to get the post. (One issue, which had dogged him before, was the dubious means by which he had obtained an annulment of his first marriage, after it ended in divorce in 1941, in order to remarry in 1942). Ultimately he succeeded. As bishop at Grace Cathedral in San Francisco, Pike added apostolic authority to his arsenal and put it to use. He became a one–man ecumenical force by recognizing a Methodist minister as having dual ordination and freedom to serve in the diocese. Later he ordained a woman as a first–order deacon, the preliminary step before full pastoral ordination in the church (which was not approved until after Pike's death).

But in San Francisco, at the peak of his fame and influence, his life began to unravel. Though he eventually sobered up through AA, his second wife filed for separation in 1965 (and for divorce in 1966). Soon Pike was openly living with another woman, who later committed suicide after a fight with him. Growing more radical, Pike now actively argued against the Virgin Birth, the Trinity, and the Incarnation. Heresy procedures were begun in 1962, '64, '65, and '66, growing in intensity, but each time the church decided it was not in the denomination's best interest to pursue a heresy trial. The church's reluctance to try the openly heretical Pike demonstrates the demise of this instrument of denominational adjudication.

Pike stepped down as bishop of Northern California in 1966, the same year his son committed suicide. This led to his explorations of sé;ances as a means of talking to his son. Pike was becoming an embarrassment to the church. After the death of his lover, he partnered with Diane Kennedy, a woman he had already been sleeping with, who was 29 when the 55–year–old Pike first hooked up with her. When his marriage to her in December 1968 led to church discipline—once again, one of the issues at stake was the means by which he arranged an annulment, in this case of his second marriage—he broke with his denomination entirely, claiming that the church was hopelessly out of date.

Pike and his new wife found a warrant for their position in a line from an Essene text translated from the Dead Sea Scrolls: "This is the time for the clearing of the way into the wilderness." As Robertson observes, "This declaration by 1969 had become a personal rallying cry for the couple as they disassociated themselves from institutional religion and a conventional livelihood, and proposed to study in Israel a historical Jesus far different from the accepted view of most of Christianity." In April of 1969, while Pike and his wife were driving to Qumran, they got lost and their car became stuck in the dirt. After ten hours of walking, Diane made it out. Five days later the bishop's body was found.

What are we to make of this strange story? No doubt God used this ecclesiastical gadfly to give voice to many just causes. Pike was an articulate and witty spokesman for racial equality, the poor, and the role of women in the church. But it all seems so accidental. Pike never seemed to recognize that giving voice to the prophetic makes some private demands on the prophet. And "relevance" is a harsh idol, demanding ever–larger sacrifices. Some aspects of the gospel will always be "foolishness to the Greeks."

Many Christians in the Fifties and Sixties worried that unless the church became more visible and more relevant, it would be relegated to the cultural sidelines. It is easy to see how Pike must have looked like an answer to their prayers. Perhaps the main lesson of this troubling biography, then, is that we should be careful what we pray for.

Michael G. Maudlin is the former managing editor of Christianity Today magazine and the editorial director of Harper San Francisco.

A Passionate Pilgrim is available from Amazon.com and other book retailers.

Rediscovering 'Husbandry' | What Colonial farmers have to teach us about living with the land. (Aug. 03, 2004)