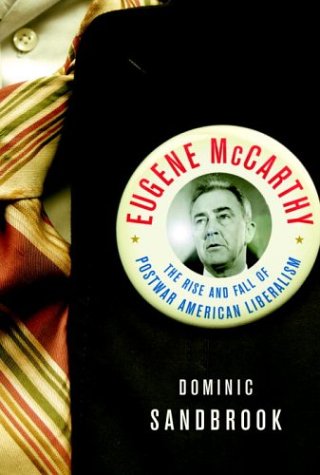 How the fate of Eugene McCarthy's insurgency against LBJ sheds light on the 2004 presidential campaign.
February 2004

Stop me if you've heard this one: Fed up with the complacency of the Democratic Party, a respected but quite liberal old hand seeks the presidential nod. His surprising frankness and his palpable disgust with the current administration, which is prosecuting a controversial war, attracts an enormous crowd of young, idealistic, enthusiastic, and—let's face it—angry supporters. The media excitement, the policy missteps of the incumbent president, and the overall mood of the country all indicate that he's got a real shot at the Oval Office. Then, a gorgeous preppie senator from the Northeast steps in and mops up, leading to. …

And there the analogy between Howard Dean and Eugene McCarthy—and between John Kerry and Robert Kennedy—breaks down, because a certain Palestinian activist cut short RFK's bid for the presidency. Instead, voters had to choose from Tricky Dick, last-ditch segregationist George Wallace, and McCarthy's longtime-ally-cum-bitter-enemy, fellow Minnesotan Hubert Humphrey.

Eight years of Democrat rule ended with Eisenhower's once-spurned vice president squeaking out a plurality (43.2 percent to Humphrey's 42.6). Four years on, Nixon received over 60 percent of the popular vote—a 49-state rout. Since then, only major scandals, very bad luck, or both have loosened the Republicans' death grip on the executive branch, and the Democratic occupants have often acted as if they were only renting.

Carter seemed to get lost in his own malaise but finally opted for austerity in spending, deregulation, and an anti-inflationary monetary policy, thus helping to clean up Nixon's free-spending, money-printing mess. And after he suffered the crushing midterm disaster of '94, Bill Clinton turned out to be a remarkably conservative president. Welfare was cut, the total number of federal workers declined, and spending was held down as Republicans and Democrats pulled out the long knives and went at it. Not for them the crusading liberalism of the Roosevelt, Truman, and Johnson administrations.

In Eugene McCarthy: The Rise and Fall of Postwar American Liberalism, University of Sheffield historian Dominic Sandbrook places his subject firmly at the center of the American gamut. Growing up a devout Catholic in the small Depression-ravaged town of Watkins, Minnesota, McCarthy saw farmers forced to auction off their belongings at humiliating prices.

Such heart-rending scenes stamped upon the young McCarthy the belief that "we"—as in "the taxpayers"—"should look first to the needs of the people, and that when these needs are great, we should survey our private and public resources and work out a program of action." Not surprisingly, he saw the various initiatives of the New Deal as a good start, but he wanted to go much, much further. As a student of McCarthy's when he taught at St. John's College remarked, his prof was so concerned with income distribution that he often forgot about the need to generate said income.

McCarthy was spurred on in his redistributive zeal not by secular ideologies but by Catholic social teaching—which, in the early half of the century just past, could be heady stuff. His religion was the cause of many decisions in his life, including a brief stint at a seminary. His involvement in politics was inspired by the reading at mass of the pope's Christmas letter. On primary night when he first ran for a House seat in 1948, McCarthy's loyalists could be found praying the Rosary while they waited for the returns. His efforts to purge the Communists from local and national politics owed as much to the Vatican's hard line against a competing creed as to the Soviet Union's geopolitical threat.

In Congress, McCarthy and his fellow Northern liberals found themselves at odds with a coalition of Republicans and Southern Democrats during the Truman administration, with the passive resistance of Dwight Eisenhower, and then with the cagey triangulation of JFK. Spending was held down and civil rights legislation was kept bottled up in committee.

For many, it was a very bitter irony that McCarthy would enter the fray against LBJ and help to usher in a Republican administration. Johnson, after all, was the president who broke the legislative logjam to pass the Civil Rights Act; who created new entitlements such as Medicare with his paean to FDR, "The Great Society"; and who was prosecuting a war in Vietnam on behalf of the local Catholic elite against the Communist Viet Cong. McCarthy's decision to undermine Johnson, so the argument runs, marked the nadir of postwar American liberalism.

If liberalism is simply a political movement, joined at the hip to the Democratic Party, the ironists have a point. But if it is a broader political and sociological phenomenon, then LBJ dropping out of the race and Humphrey losing narrowly to Nixon hardly mattered. Once in office, Nixon gave the country affirmative action, a bender of an inflationary monetary policy, wage and price controls, and a fondness for new government initiatives that wouldn't be rivaled again until the second Bush administration.

Eugene McCarthy: The Rise and Fall of Postwar American Liberalism is available from Amazon.com and other book retailers.

Is "Sensual Orthodoxy" a Contradiction in Terms? | Read this unconventional collection of sermons and judge for yourself. (Dec. 8, 2003)

Urban Eden | In City: Urbanism and Its End, a new history of New Haven, Connecticut, the city (in its late 19th-century form) is an ambiguous heaven-and the suburbs that relentlessly followed are hell. Which leaves us where, exactly? (Dec. 01, 2003)