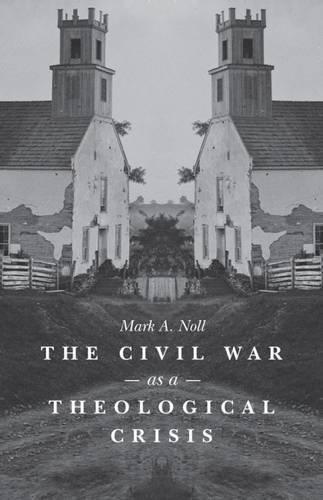 The Civil War as a Theological Crisis (The Steven and Janice Brose Lectures in the Civil War Era)
Mark A. Noll
The University of North Carolina Press, 2006
216 pp., 35.95

"Both Read the Same Bible"

Mark Noll on the Civil War as a theological crisis.
March/April 2008

Only in the last ten to fifteen years has the serious study of the Civil War's religious dimension become commonplace. Thanks to scholars such as Mitchell Snay, Steven Woodworth, James McPherson, Richard Carwardine, Eugene Genovese, and Harry Stout, we now know much more than ever before concerning the role of religious bodies and religious beliefs in the unfolding of the sectional crisis.

On the crest of this historiographical wave comes The Civil War as a Theological Crisis, the latest work from the nation's premier historian of Christian thought. In the opening pages, Mark Noll explains that his goal is not primarily to shed light on the causes or course of the war but rather "to show how and why the cultural conflict that led to such a crisis for the nation also constituted a crisis for theology." That crisis centered on two questions: what the Bible had to say about slavery, and what the conflict seemed to suggest about God's providential design for the country. Although "both read the same Bible," as Lincoln famously observed in his second inaugural, Protestants North and South discovered that "the Bible they had relied on for building up America's republican civilization was not nearly … as inherently unifying for an overwhelmingly Christian people as they once had thought." In the end it was the force of arms, not the Word of God, that would resolve the sectional dispute.

Noll situates the theological crisis brought on by the war in the context of popular "habits of mind" that had flourished in the United States since the early years of the republic. Marrying Christian faith with republican political ideals and Enlightenment epistemology, American Protestants were typically suspicious of religious authority and skeptical of intellectual élites, and they thought of the Bible as a "plain book" readily comprehensible to "anyone who simply opened the cover and read." Many viewed God's ongoing work in the affairs of men as just as easily apprehended; rare was the Christian leader who shared Lincoln's humbling insight that "the Almighty has his own purposes." Instead, as the war approached, "confidence in the human ability to fathom God's providential actions rose to new heights." Although the integration of "biblical faith and Enlightenment certainty" gave antebellum American Christianity much of its popular appeal and expansive vitality, Noll argues that the combination left evangelicals ill equipped to resolve the sectional crisis—or even to think very deeply about its implications. Indeed, one of the distinctive traits of the American Civil War, Noll contends, is the almost utter lack of "theological profundity" that it evoked among the Christians torn apart by it.

Of the two major questions that he highlights, Noll devotes considerably more attention to the controversial relationship between the Bible and slavery. Proslavery southerners read the Bible literally and found no explicit indictment of the institution. Significantly, when antislavery northerners read the Bible literally they frequently reached the same conclusion, a realization that drove a tiny minority to repudiate biblical authority entirely, while prompting a far larger group down the slippery slope of appeals to the general "spirit" of Scripture, which their common sense (as opposed to careful exegesis) convinced them was incompatible with human bondage. The latter often invoked "self-evident truths" that were central to national ideology, but "the stronger their arguments based on general humanitarian principles became, the weaker the Bible looked in any traditional sense." Small wonder that so many proslavery Christians came to equate the antislavery crusade with an assault on orthodoxy.

There was a third alternative for antislavery Christians, Noll notes, one that would have preserved biblical authority by conceding that Scripture did not prohibit slavery per se but contending that it did in fact condemn the racial slavery actually practiced in the United States. A few lone voices tried to marshal such arguments, but they failed badly. For one thing, their "nuanced biblical argument was doomed" by a democratic culture that exalted "common sense" approaches and was reflexively suspicious of sophisticated biblical interpretation. As important, Noll argues strenuously, was the pervasive racism—in the North as well as the South—that led whites to take for granted that references to slavery in the Bible "could only mean black slavery." To be successful, he asserts, "the argument that a racially discriminatory slavery was a different thing from slavery per se would have required the kind of commitment to racial antiprejudice that the nation only accepted … late in the twentieth century—if in fact it has accepted it now."

Some of the most interesting insights in The Civil War as a Theological Crisis come from Noll's brief survey of the views of European Christians regarding the American conflict. Although European Christians were just as likely to discern God's intentions in the struggle, almost none linked the defense of American slavery with the defense of scriptural authority. Noll attributes the difference to the greater weight that "history, tradition, and respect for formal learning" carried in Europe, as opposed to the United States, where the "interpretive will of the people" reigned without challenge. European observers also saw clearly much that was invisible to American believers, in particular the degree to which material interests, republican assumptions, and racial attitudes were shaping the Christians, North and South. Above all, they were willing to question whether the combination of individualism and a lack of centralized religious authority—the democratic and voluntary features of American Christianity that had contributed so much to its dynamic growth—might also be primarily responsible for the civil strife that had divided the country. "It was a point to ponder," Noll remarks.

This slim book raises momentous questions for the history of American Christianity while offering, in the process, intriguing insights into an understudied aspect of our nation's greatest civil ordeal. As such it deserves a wide audience, not only among scholars but, more important, among Christians outside the academy. It will be more accessible to the former. Published by a university press, derived from lectures originally delivered to an academic audience, this is a book that will communicate best with specialists. Church historians will be interested in Noll's characterization of the Civil War as a turning point in American theology, while Civil War historians will be enlightened by his explication of the conflict's understudied theological dimension. The latter may question whether he has really demonstrated the centrality of theological debate to the sectional crisis, given that Noll focuses primarily on a small number of prominent theologians and religious leaders, and both groups of specialists may wish that the author had offered more evidence of how élite theology translated into popular religious attitudes.

Of greater significance to the lay reader should be the implications of Noll's analysis for contemporary Christianity. Although Noll never overtly moralizes, there is a sense in which his entire book is a cautionary tale. The Civil War as a Theological Crisis reminds us of how easily cultural conventions can shape definitions of "orthodoxy." It warns us that an aversion to complexity is not the same thing as a commitment to scriptural authority. And it demonstrates, powerfully and all too pertinently to the present moment, the consequences that follow when Christians in a society given to the "voluntary and democratic appropriation of Scripture" come to disagree passionately about what Scripture actually teaches.

Robert Tracy McKenzie is Logan Family Professor of American History at the University of Washington. He is the author most recently of Lincolnites and Rebels: A Divided Town in the American Civil War (Oxford Univ. Press).