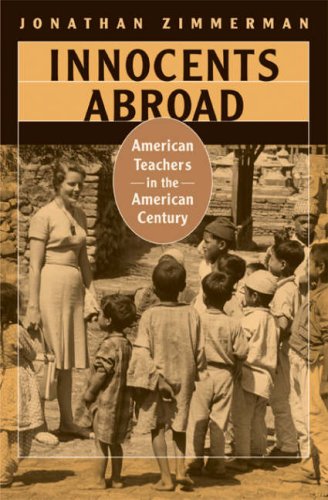 The first official day of training, after having flown east for five meals (all breakfast), my Peace Corps cohort somehow ended up singing "The Star Spangled Banner" with enough heart to bring our trainers, Kazakhstani nationals, to tears. But walking out onto the terrace afterward, one of the volunteers told me that he just didn't think it was right to have sung our national anthem in their country. I think I pointed out that they had asked us to their country precisely because we were Americans.

As it turned out, our earnest and sometimes ridiculous efforts to respect the culture would be thwarted in every way, beginning with our hapless reliance on the filler-word "um"—which, in Kazakh, is like dropping f-bombs. At some point, the culture stopped seeming sacred to us. It wasn't too long before we started writing top-ten lists in our newsletter with digs at the local culture: "Godliness is nowhere near cleanliness," and "Blood is thicker than water, unless it's over 100-proof." As cavalier as our new attitude toward Kazakhstani culture may have seemed, it came amid much angst.

Our experience, it turns out, was not at all unique. Innocents Abroad—no, not the one by Mark Twain—shows that Peace Corps volunteers, missionary teachers, and even Teddy Roosevelt's imperialists in the 20th-century's third world had much in common, not only in being overwhelmingly white, young, and inexperienced but also in their worldviews. To write this book, Jonathan Zimmerman patiently made his way through scads of diaries and letters from teachers, sorting out the debates about education stirred up by rote memorization, corporal punishment, vocational training, church-state relationships, and whether or not to be publicly proud of America. The result is accurate, if not fully processed. To judge by how exactly each chapter coincided with my experience, Zimmerman had an easy time categorizing the contended issues.

It's much harder to deal with them. And here I could begin a long, headachy list of internal debates about appropriate responses to teaching with teachers who lie obviously and shamelessly, to eating food cooked by a woman whose hygiene habits make a bout with worms all too likely, to the vice principal dropping in on my class to bonk students on the head, and so on. While Zimmerman mercifully avoids discussions of parasites, the other questions are within his scope.

The root of conflict in the book, as well as in the life of many an overseas teacher, is how exactly to wield power—the power of teaching, of small-scale policymaking, of having a certain influence over children—in cultures that have come under America's sphere of influence. The main question could also be put, "how do we do what's best for them?"

While this question certainly had a racist cast and a racist answer for far too long (and still has a patronizing air), it hasn't been answered once and for all. Zimmerman treats the question as sincere but points out that it sets Americans up as arbiters of right and wrong. His own efforts to arbitrate were humiliating—in his Peace Corps days, he recalls, he sent a missionary away, only to be deflated when the people whose lifestyle he thought he was defending said they'd wanted to hear more about Jesus. But an accusation of patronizing behavior doesn't settle anything. Whether or not I believe Americans have been appointed to such a role, I believe teachers have. Zimmerman seems to agree, finally tipping his hand in the epilogue.

Innocents Abroad gives plenty of space to the era when culture was the same as civilization—something Americans gave "natives." But the period since then—when the notion of culture as a monolithic, prescribed package often tangled with the teachers' goals and ideas—is more interesting.

Each competing view of the issues was, at some time, the only correct way, according to the then-dominant view of culture. So, while in the early 20th century natives needed to be disciplined with a cane because, well, they were natives, later on, the very idea was horrifying. But then the same people who were horrified began to use corporal punishment when they realized that it was expected and effective—culturally acceptable—and it had the benefit of scoring them some respect and establishing a semblance of order.

"Culture," in the minds of the most recent generation of teachers shipped off to the ends of the earth, is closely related to human rights. Many American teachers are surprised to realize that, in trying to break down racism—which they consider to be universally wrong—it is "culture" they come up against.

This is not irrelevant to those who will never be followed in the streets by children shouting, "Khello, teacha!" False conceptions of culture—which often don't last long abroad—have caused many Americans to deal with the world as though morals undergo extreme diffraction when they pass into another language or place. These misconceptions have been an excuse for a failure to confront injustice. They have caused many to regret the loss of cultural heritage discarded in the light of the gospel, and to resent or be ambivalent toward conversions to Christianity because they necessarily restructure someone's life away from his culture.