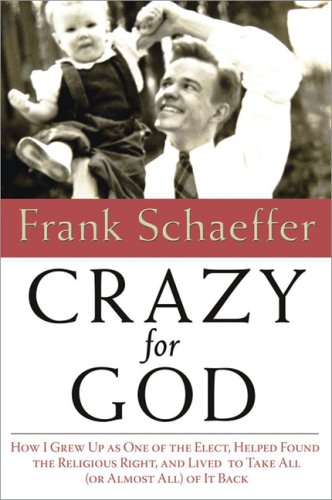 Son of a Preacher Man

A memoir by Frank Schaeffer.
January/February 2008

If you happened to grow up as the conflicted child of evangelical missionaries (like my husband) or just the overlooked offspring of a zealous preacher (like me), then Frank Schaeffer's 1992 novel Portofino more than paid for itself in counseling fees. "Read this," you could say to your psychiatric other, "and you'll understand my whole childhood. Except I never had the Mediterranean, or the prosciutto."

I loved Portofino. Almost against my will I loved it. It came from the imagination of a guy I'd disliked since high school, when I had to watch all of How Should We Then Live three—count them—three times (maybe it was two). Frank directed his father Francis in those Christian documentaries, and I sided with my big brother, who said that the Schaeffers oversimplified history. Mostly by then I was just sick of everything the evangelical world pushed toward me. When Francis and Edith Schaeffer visited Wheaton in my freshman year, the year before Francis died, I participated in an orgy of mock-clapping and stomping before they came out onstage. Maybe the Schaeffers thought the loud adulation was real, and maybe it was for some of the people who joined in. For me it was one more chance to be obnoxious and unkind. I had a lot of chances back then.

Which brings me back to Schaeffer the Younger—"Frankie" in those days—a firebrand writer and speaker who also tended to be obnoxious and unkind, though in a different way. Wheaton never hosted Frankie while I was there, maybe because he accused some well-liked professors of being wishy-washy on abortion.

I agreed with him about the personhood of the unborn, but I disliked his personal attacks on people who disagreed with him or his father. I thought if we ever stood in the same room, I'd probably chuck something at him, like a film projector, or a copy of Whatever Happened to the Human Race.

Years passed, Frankie Schaeffer faded from public view, and then one day some friend gave me Portofino and I zinged through it in a couple of sittings. I could relate to every bit of the evangelical zaniness, but beyond that, I loved the novel's sensuous descriptions of summer in the Gulf of Genoa: the turquoise Mediterranean, "blood-warm water," sun lighting up the tops of the Cypress trees, "buffalo milk mozarella cheese floating in a bath of whey." Have you ever put a book down because it made your salivary glands ache? Even unpleasant things—a pus-gorged toe, an octopus bite—jumped from the page to my nerve endings. I still can't think of that book without longing for ripe tomatoes.

Somehow I missed the sequels to Portofino; the next thing I read of Schaeffer's was Baby Jack, which I admired for its sympathetic portrait of an artist struggling to understand his son's decision to become a soldier (I squirmed my way through the God parts). At this point I liked Frank Schaeffer's writing so much that I was even willing to call him Frank Schaeffer. But I still didn't know how to feel about him as a human being.

So now, this year, comes Crazy for God, an autobiography that's very like Portofino in its tangible beauty and humor, but with more contrition and a little less fiendish lampooning. Memoir obviously demands introspection, and Schaeffer doesn't hold back. He begins by saying what he left behind—evangelicalism, conservative activism—and then admits that it's been easier to change his mind than to change his gut. What comes next is proof of this. Passing from his parents' history to his childhood in Switzerland (sledding in the Alps, skiing home from school, hanging out with the crazy and famous), Schaeffer describes a life that was by turns happy, difficult, idyllic, and completely nuts. Polio and dyslexia seemed like bumps on the road compared to the burden of growing up in a family that set out to save the world one intellectual at a time. He adored his beautiful mother, but characterizes her as a kind of spiritual megalomaniac; he was devoted to his brilliant father, but eventually found the Reformed/evangelical viewpoint unsatisfactory and set out to find his own way. Schaeffer has always been tough on the church, but by the end of this book, he accepts personal guilt for all kinds of sins and mistakes (including, by extension, the Bush Administration), and admits that he'll probably make more. If he spares anyone here, it's not himself.

And we forgive him for his shortcomings, partly because he's a world-class storyteller. When he's describing the principal of his Swiss school ("a robust tweed-clad, child-hating, wide-hipped French woman married to a small subservient Swiss husband who trotted at her side, the way a worried pilot fish accompanies a shark"), or a or wheezy old communist gurgling snuff at a British boarding school, or Pat Robertson waxing apocalyptic about masturbation in the makeup chair at the 700 Club, Schaeffer shows why he's worth reading, listening to, enjoying. It's not because he had famous Christian parents or knew the Fords. It's because he can make us laugh, make us wince, and make us really think about things, all at the same time.

This doesn't mean he's exorcised himself of all the old nastiness. He still has a way of hitting the nail right on the head, only to turn around and sling the hammer at some innocent bystander. He's grossly unfair to Billy Graham, for instance, and snobbish about the evangelical proletariat. When he describes his former fan-base, he sounds as gracious as a guy complaining about his ex-wife's bra size.

What will bother evangelical readers most, of course, is how harsh the former Frankie is on his parents—especially his mother. Well, give him a break, if you can. It's not just that Francis and Edith Schaeffer chose to make their family life a part of their public ministry (Edith's memoir The Tapestry was longer than The Brothers Karamazov). It's not just that missionaries and pastors do their children a disservice when they live very different lives in public and private. It's not just that growing up in a missionary family can be like growing up in Windsor castle: feeling inept and superior at the same time, longing to be ordinary but looking down on everyone, even your own parents.

This book, for all its embarrassing human revelations, ultimately honors the Schaeffers, as only a son's story could. In the golden years of L'Abri, Francis Schaeffer sought a Christianity that was honest, authentic, and open-minded. His admirers may be uncomfortable to learn about his failings, but I hope he'd be relieved now to have his son tell us who he really was in private, without the evangelical mandate or his own celebrity clanking behind him like Jacob Marley's chains.

As for Edith, it's Frank's account—not her own—that has finally taught me to admire her. She loved stories. She loved the arts. She loved God. She was a natural actress who read aloud to her children from some of the world's best books. She was hilariously, eccentrically frank about sex. She was tolerant toward nearly everyone and fiercely loyal to those she loved.

So here is my earnest and heartfelt prayer to Frank Schaeffer, which I say on behalf of nobody else, with my hand raised and my eyes closed, not looking around at my neighbor (well, maybe just a little peek):

Dear Frank, we just come to you today and praise you for your gifts (of prose). We just ask you to forgive the trespasses of your former people, which are many (the trespasses, as well as the people). Forgive our failings as we forgive yours (it's hard, but we'll try). Most of all, we ask you not to withhold from us the manifold blessings of your bountiful mercy.

In other words, keep writing books, Frank. You're good at it.