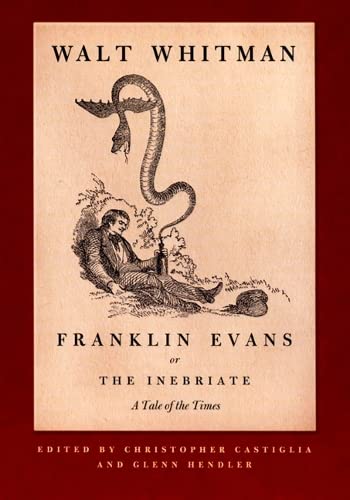 In 1842—long before his self-reinvention as the Bard of America in Leaves of Grass—an aspiring author named Walter Whitman published a novel called Franklin Evans in a New York weekly called The New World. The editor of The New World, Park Benjamin, made his living by pirating English books, including Charles Dickens' American Notes, which he reprinted as "extras." Whitman's novel, however, was billed as an "Original Temperance Novel," and original it was—if, that is, one discounts the interpolated stories Whitman used to pad the narrative. His readers seem not to have minded, quickly buying (if Whitman's biographers are to be believed) some 20,000 copies.

Franklin Evans is the story of an innocent country boy who travels to the city and succumbs to the Demon of Intemperance. Eventually, Franklin loses his wife, his employment, and his freedom (having fallen in with a gang of thieves). After his release from prison, he signs the Old Pledge, promising to abstain from distilled spirits, but not from wine. Alas, the Old Pledge proves to be insufficient after Franklin moves to Virginia, where his wine-drinking leads inevitably to a taste for strong liquor and an unfortunate marriage to a "creole" slave. When he realizes what he has done, he takes up with a wealthy widow from the North, whom his wife poisons out of jealousy before committing suicide. At long last, Franklin is moved to sign the New Pledge of total abstinence from alcohol.

In his old age, Whitman liked to joke about Franklin Evans. He told Horace Traubel that he had dashed off the novel for money "with the help of a bottle of port or what not." Another version had Whitman penning the novel in Tammany Hall with the help of gin cocktails from the nearby Pewter Mug. Such anecdotes, however, are not to be taken seriously. Evidently, Whitman preached (and practiced) the virtue of temperance throughout his life. As a journalist, he reported favorably on a number of Temperance events in New York City (notably the meetings and parades of the working-class Washingtonians, who were to the older American Temperance Society what the Methodists were to Episcopalianism). And he published a number of other Temperance tales, including an unfinished sequel to Franklin Evans called The Madman.

What is true is that Franklin Evans, with its slapdash construction, purple prose, and conventional moral, had no place in the myth Whitman had spun for himself with Leaves of Grass. It's easy to understand why he omitted the novel from his Complete Poems and Prose (1888). In fact, most of his readers had no access to the text of Franklin Evans until 1921, when it was republished by Emory Holloway, the first editor of Whitman's uncollected work, who subsequently prepared a trade edition of the novel for Random House (1929). Apart from Thomas Brasher's 1963 annotated edition in The Collected Writings of Walt Whitman, the only other printing of Franklin Evans was a 1967 college edition prepared by Jean Downey.

Until now, that is. Forty years after Downey's edition, Duke University Press is issuing a new paperback edition of Franklin Evans, edited by Christopher Castiglia of Loyola and Glenn Hendler of Notre Dame, who contribute a long, academic introduction to the volume. The first part of their introduction is historical, supplying interesting details regarding Whitman's early years, urban life in New York City, and the Temperance movement. The second part offers a close reading of the novel as a reflection of America's "incoherent ideologies" of class, gender, and race. To sweeten the deal, the editors have appended a pair of Whitman's other Temperance tales, the unfinished Madman and "The Child and the Profligate," along with an 1842 Temperance address by Whitman's future "Captain," Abraham Lincoln.

Why has Duke decided to republish a fourth-rate potboiler like Franklin Evans? The answer, surely, is academic fashion. If a single scholar can be held responsible for the revival of interest in Franklin Evans, it is David Reynolds, who first called attention to the literary significance of Temperance fiction in his landmark study Beneath the American Renaissance: The Subversive Imagination in the Age of Emerson and Melville (1988). Reynolds' argument was that the celebrated moral ambiguities of the canonical writers of the American Renaissance—Hawthorne, Melville, Whitman, et al.—were anticipated by the "Immoral" or "Dark" Reform fiction of the era, fiction that subversively sensationalizes the very evils—drink, prostitution, slavery—it purports to denounce. In Reynolds' view, Franklin Evans falls squarely into the category of "Dark Temperance."

Reynolds returned to the subject of Whitman's Temperance fiction in Walt Whitman's America: A Cultural Biography (1995) and The Serpent and the Cup: Temperance in American Literature (1997), a collection of critical essays he edited with Debra Rosenthal. The Serpent and the Cup concludes with a pedagogical essay by Joan Hedrick (the biographer of Harriet Beecher Stowe) on "Drink and Disorder in America," a class she taught at Trinity College in 1996. While Hedrick did not include Franklin Evans in her syllabus, such interdisciplinary classes—which often appear under the rubric of Gender Studies—are no doubt the target audience for Duke's new edition of the novel. The question is why anyone who is not assigned Franklin Evans in college should bother to read it.

Needless to say, no modern editor or critic has recommended Franklin Evans for its literary merit. Holloway claimed (rather unpersuasively) that the novel's interest lies in the biographical light it throws on the secretive nature of the poet who wrote Leaves of Grass. Reynolds contended (rather more persuasively) that the novel was a tongue-in-cheek experiment with the "Dark Reform" rhetoric Whitman would put to more effective use in Leaves of Grass. Castiglia and Hendler, however, are content to let Franklin Evans stand on its own merits—or its own demerits, we should probably say. "Franklin Evans is a particularly important historical document," Castiglia and Hendler assert, "precisely for the reason critics and editors have left it unread for decades: it is an incoherent and often aesthetically dissatisfying text." The novel's artistic flaws are important, that is, because they point up "the difficulties Franklin Evans and its hero have in maintaining inviolable distinctions between races, genders, or classes."

Near the end of the novel, for example, Whitman interrupts the story of Margaret, Franklin's creole wife, to tell the tale of "the Last Vassal of the Snake-Tempter," a none-too-subtle revision of "The Last of the Sacred Army," a tale about the last veteran of Washington's army that Whitman had already published in The Democratic Review. Recast as a product of Franklin's "mania," the tale depicts the induction of the Last Vassal—that is, the Last Drunkard in America—into the Army of the Regenerated, whose emblem is a "fair female, robed in pure white," bearing a cup of water, the antithesis of the dark-skinned Margaret. Rather than dismissing the tale of the Last Vassal as a product of shoddy workmanship, Castiglia and Hendler welcome it as evidence of the racialized nature of Temperance rhetoric.

Unfortunately, Castiglia and Hendler are so preoccupied with racism and imperialism that they ignore the obvious Christian influences on Whitman's eschatological "Last Vassal" tale. The same goes for other chapters in which Franklin's struggle with the Demon of Intemperance is couched in overtly religious, if not specifically Christian, language. Near the end of the novel, for example, Franklin stumbles across Colby—the friend who first introduced him to drink—lying drunk and dying in the gutter. "How had it happened," Franklin asks himself, "that I myself did not meet with the same degraded fortune? Was it not indeed miraculous … ? I blessed my Maker as I thought of these things, and besought His favor on that holy Cause of Reformation, where I had myself cast anchor."

Admittedly, it's hard to know how seriously the young Whitman took such religious sentiments; in Temperance fiction, their expression was thoroughly conventional. But that simply makes Castiglia and Hendler's neglect of religion all the more puzzling.

This huge omission notwithstanding, Duke's new edition of Franklin Evans will be welcomed by students of Temperance literature as well as by Whitman aficionados. For the latter, the question posed by Franklin Evans has always been, How did the hack who wrote Franklin Evans turn himself into the genius who composed Leaves of Grass? Reynolds' answer (as we have seen) is that the two books drew from the same well—the subversive rhetoric of "Dark Reform." For my part, I must confess, slogging through Franklin Evans raises a more troubling question: Is Leaves of Grass itself as great a work as we have been led to believe?