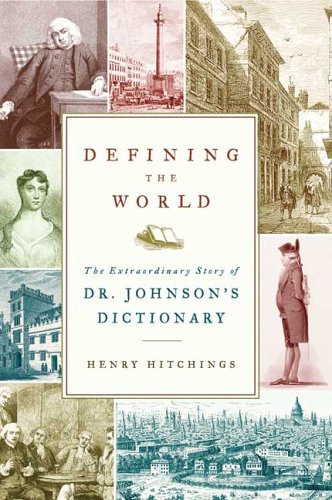 Dr. Johnson and his Dictionary.

1.
In 1952 Maria Moliner seems to have grown bored. She and her husband had moved to Madrid some years before, from Valencia, to educate their children. But the children were mostly grown now, Maria's husband was often away, and her work as a librarian provided little stimulation. Moliner (born in 1900) had been one of the few Spanish women of her time to take a university degree, in history, and though it was an honors degree an academic position was unthinkable: even as a librarian she suffered from suspicion, prejudice, and a dearth of intellectual challenges. So she passed the time by returning to her deepest intellectual love, linguistics and lexicography. She decided that she would produce, all by herself, a dictionary: a complete dictionary of the Spanish language as it was actually used.

To some degree this task constituted a protest—a protest against the work of the official guardians of the Spanish language, the Real Academia Español. These days the RAE's chief production is simply called the Diccionario de la lengua espanola, but at the founding of the august body, in 1713, its members worked on what they came to call the Diccionario de autoridades: the Authorities' Dictionary. The task of these Authorities was to preserve good Castilian Spanish, to purge it of impurities and unnecessary accretions, and to send it along to the next generation in a pristine state. But, Maria Moliner wondered, what about preserving a record of Spanish as it was actually used? It was not a Diccionario de Autoridades she wished to produce but rather a Diccionario del uso del español—so she titled her project.

She expected the work would take her two years. Instead it took fifteen, and it's a miracle that it didn't take far longer than that, especially when you consider that the Authorities of the first Academia labored over their project for fourteen. But in 1966 and 1967, the two volumes of Maria Moliner's Diccionario del uso del español appeared, weighing ...