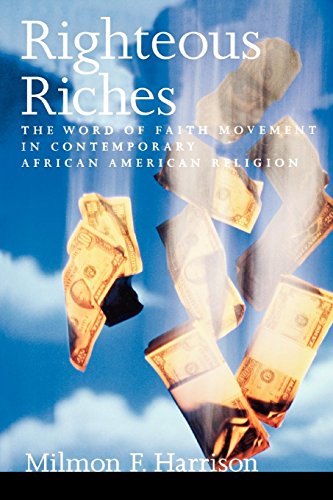 You Have the Right to Be Rich

But you have to earn it.

Milmon Harrison's ethnographic survey of the Word of Faith movement opens with capital letters and exclamation pointsâ€”punctuation worthy of a faith-stirring service at a megachurch in Sacramento, California. But this is no Sunday worship service; it is the church's First Annual Finance Convention, and the "brightest stars" of the Word of Faith galaxy have lined up to "teach believers what the Bible 'really' says about God's will for the prosperity of the faithful."

Currently on stage is televangelist Leroy Thompson, who is commanding the audience members to make a few confessions at the top of their lungs. They repeat after him: "I'LL NEVER BE BROKE ANOTHER DAY IN MY LIFE!" Then, "I AM EXPECTING SUPERNATURAL INCREASE THIS WEEK!" And then, "I AM EXPECTING SUPERNATURAL DEBT-CANCELLATION THIS WEEK!" The audience responds not just dutifully, but enthusiastically. Faith is an act of the will, and it empowers these believers to become what they say: "they appear to be standing taller now, ready to fight and aggressively take hold of these things they are personally claiming and confessing as theirs as part of a body of entitled believers."

As we learn later, the congregants are empowered not only by raising their voices but also by investing their dollars. For adherents of the Word of Faith doctrine, relationships with God are fundamentally causal; believers may be "entitled" to certain blessings, but as a Word of Faith preacher might put it, you can't reap a harvest without sowing seed.

Harrison, a professor of African American studies at the University of California, Davis, knows whereof he speaks. In keeping with a vigorous trend in the study of religion, Harrison is investigating the very religious group of which he was formerly a part. In his preface, Harrison explains that during his twenties he became an "excited, born again, 'baby' Christian" at a Word of Faith church. Though still a Christian today, Harrison no longer identifies as a Word of Faith believer, and ...