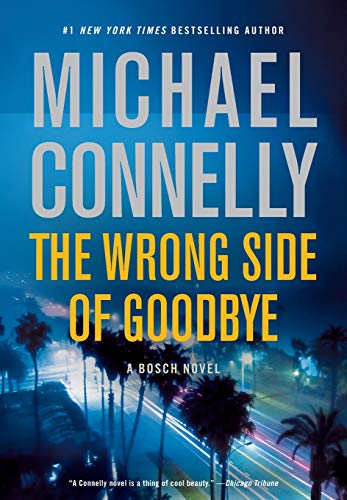 The Wrong Side of Goodbye

"A mission etched in a secret language."
November 2016

If you have already been following the adventures of LAPD Detective Harry Bosch and, along the way, his half-brother, Mickey Haller ("the Lincoln Lawyer"), the two frequently intersecting, you have probably already acquired your copy of Michael Connelly's latest novel, The Wrong Side of Goodbye, featuring Bosch in the lead role but with Haller heavily involved in one of the two principal strands of the plot. Even so, you may want to compare notes with another fan (me). And if you haven't tried Connelly, here's a chance to test the waters.

Between his last outing and this one, Harry has won a lawsuit against the LAPD (he was illegally forced into retirement, having already retired once and then returned to duty to work cold cases). He's now working part-time as a private investigator and part-time as a "reserve officer," an unpaid homicide detective, for the tiny, cash-strapped town of San Fernando, where budget cuts have decimated the department.

The story is set in motion when a reclusive billionaire, Whitney Vance, asks Harry to search for a possible heir (Vance is quite old; the end could be near). The second strand is a case for the SFPD; Harry is trying to track down a brutal rapist he has dubbed the Screen Cutter, whose victims have all been Latinas (although the rapist isn't Latino). Harry is torn between the two lines of inquiry as they both gain momentum.

In The Wrong Side of Goodbye, all of Connelly's characteristic strengths are evident: his intimate knowledge of police work, his gift for creating compelling characters (above all, Harry Bosch and Mickey Haller), his encyclopedic knowledge of LA (mini-lessons in the history of the megalopolis are freely dispensed, along with nods to various eating-places), and the tension between moral complexity and an uncompromising moral core that makes his work distinctive in contemporary crime fiction. (A lot of crime novelists are virtuosos of moral complexity; not so many are strong on the other side of the equation.)

Quite early in the book, we're told that in San Fernando, nine out of ten citizens are Latino. This turns out to be not simply another bit of information but rather a pointer to one of the key themes of the story, emphasized in different ways in both plot-strands. This theme—the long history of Latinos in California, the discrimination they've suffered, their changing status—isn't new at all in Connelly's work, but it's foregrounded here.

One of Connelly's great accomplishments as a novelist has been to frankly acknowledge good and evil without falling into preachiness or sentimentality. In this book, he has let his guard down a bit. A couple of the characters—including one who is central to the story—are idealized flagrantly; they come across as symbols, not as real people.

But that doesn't spoil the book—not at all: it's a blemish rather than a fault-line. The Wrong Side of Goodbye is another powerful, page-turning work from one of the masters of crime fiction. And it's perfectly timed to set us up for Season 3 of Bosch on Amazon, with Titus Welliver continuing his splendid performance in the title role.