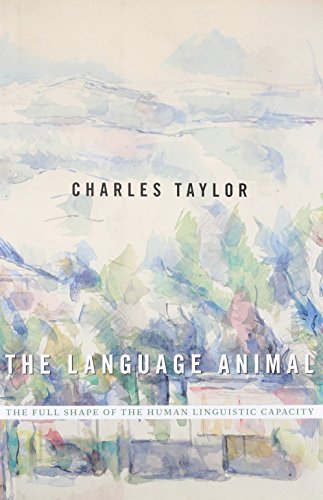 However, there are precious insights in Taylor's text. For example, on the very substrate of language in contrast to animal communication, Taylor zeroes in on the difference between recognizing something and having a word for it. This involves more of a leap than we readily suppose. An animal might recognize a triangle as the shape of a hole to jump through, or point to, to get a treat, such that the triangle is the conduit to a concrete reward. However, only humans have a label for the triangle whose usage, via utterance, yields the reward simply of corresponding to the thing we know as a triangle. That is, we humans can regard a triangle and see not only a way to get something done but also the embodiment of something to which there corresponds a name "triangle."

This means that the biblical tale of Adam naming the animals already makes a jump, in the assumption that he would seek to come up with a "name" for anything. A strain in the philosophy of language, espoused in passing by Taylor and classically by Rousseau, even claims that without language one can only conceive of individual entities, rather than perceiving categories, such that everything is, as it were, a proper noun. Bickerton, for example, imagines a prelinguistic hominid encountering every pink, fragrant flower as a new instance of such, incapable of grouping all those traits as "roses" without the ability to apply to them a word with that meaning. Now, if philosophers have ever provided a conclusive argument for this reconstruction I have yet to encounter it. Allowing that modern human thought represents a phase shift beyond any animal language doesn't require assuming that non-linguistic cognition is incapable of brute generalizations. Yet, Bickerton's point is that, at a minimum, a word makes the neurons perceiving each aspect of an object fire together more powerfully than encountering the object without using a word for it, entrenching it in a newly powerful way as a unitary concept. A nice analogy is contemporary American slang's idea of a practice or assumption having become "a thing," such as looking at one's smartphone while taking care of children: a fusion of two activities once considered unrelated and perhaps antithetical.

Less controversial would seem another of Taylor's central points, that only with language are evaluative emotions such as admiration, pride, remorse, and respect possible. To wit, for all of our tendency to anthropomorphize animals, and how obvious it is that they feel more primal emotions such as joy, sadness, and anger, the notion of the non-linguistic creature swelling with pride, or regretting something as having grievously contravened a code of ethics, is nonsensical. This is because this very kind of code of ethics applies, by definition, to a community, and the nature of ethics is such that if all members of the community are to live by such a code, language is necessary to convey and maintain it.

Taylor focuses on the example of respect. One could without language impart basic rituals of deference such as sharing food, not showing aggression, physical postures of submission. However, only with language could we impart to a child the general concept that all of these actions are intended to indicate, as in respect due to certain members of the community because of benefits they brought to the community in the past, because those who are older have knowledge useful to the younger, or even because of a more ritual idea that one's parents, or elders, are to be treated with this brand of esteem. The baboon can be taught to defer to one higher in a brute power hierarchy, but not that certain individuals, outside the bounds of who can physically abuse who with impunity, merit esteem. Remorse requires similarly broad cognitive horizons, impossible to communicate, police, or preserve without language in the human sense.

It is here that the flaw becomes clear in the objection that we can think without words. Taylor specifies that this is an epiphenomenon of a basic linguistic ability that must, in the logical sense, have developed as a communal tool, not as one for solitary reflection. Language emerged as speech, not writing, and the heart of speech is conversation, as in joint attention. Language is fundamentally conversational, not monologic. Of course, equipped with the level of thought language allows, we now can turn language off and think without it. However, the temptation to therefore imagine cats having the same richness of thought that humans do but simply not vocalizing it is as illogical as it is charming. Surely, the exigencies of natural selection would lead at least a few creatures thinking on this level to leverage their capabilities of forethought and reflection into cooperation, leading to elaborate invention and very complex societies, just as humans did. Okay, cats are solitary and "self-satisfied"—but that's just them. Why not a single more social and extroverted primate, or breed of parrot or canine? The hypothesis beckons that language makes the difference here, rather than simply piggybacking on thought.