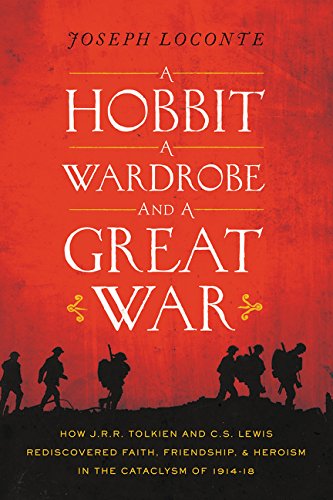 Editor's Note: This is a guest column by Joseph Loconte, associate professor of history at The King's College in New York City and the author of A Hobbit, a Wardrobe, and a Great War: How J. R. R. Tolkien and C. S. Lewis Rediscovered Faith, Friendship, and Heroism in the Cataclysm of 1914-1918, published by Thomas Nelson in 2015.

In March 1916, while waiting for a train at Great Bookham Station in Surrey, England, a precocious student with a taste for fantasy walked over to a book stall and bought a copy of Phantastes: A Faerie Romance. The young man's name was C. S. Lewis. The work transformed him. "A few hours later," he concluded, "I knew that I had crossed a great frontier." Reaching deeply into his imagination, the book challenged his growing atheism and ultimately helped to make plausible the Christian account of the human predicament.

Many readers of Lewis are aware of MacDonald's influence, but the timing of the book's impact, a century ago, is perhaps not so well known. It is surely relevant that Lewis first encountered Phantastes in the middle of the Great War, with millions of soldiers already dead, with fresh reports of the slaughter at Verdun, with the prospect of the trenches haunting his 18-year-old mind. After a visit from his older brother, Warren, already serving as a second lieutenant with the British Expeditionary Force, Lewis noted in his diary: "had ghastly dreams about the front and getting wounded last night."

While studying the classics under a tutor before applying to Oxford, Lewis was reaching for authors who would nourish a growing taste for fantasy and romance: William Morris, E. R. Eddison, John Keats, and Percy Bysshe Shelley. By his own description, he found himself "waste deep in Romanticism." MacDonald (1824-1905), a dissenting Scottish minister turned author, wrote fantasy novels and children's stories that became classics of the genre. Phantastes explores what at first seems ...