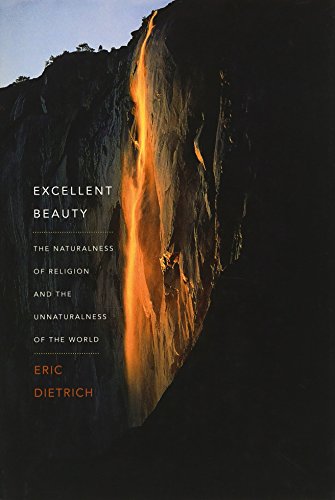 Excellent Beauty: The Naturalness of Religion and the Unnaturalness of the World
Eric Dietrich
Columbia University Press, 2015
208 pp., 32.00

It's a curious irony that the champions of scientism are some of the most vocal advocates of change and progress yet they so rarely change or progress. They've said almost nothing new in over a century. Reading Eric Dietrich's Excellent Beauty: The Naturalness of Religion and the Unnaturalness of the World, I couldn't shake the feeling that I'd read this before. I'm not sure if it was Dennett or Dawkins, Huxley or H. G. Wells, or some concoction of all of them, but reading Dietrich's latest gave me a strong dose of déjà vu.

In itself, this is not a reason to fault Dietrich. Such consistency might even, more charitably, be construed as a virtue. He is working from a particular tradition. The problem, as has been noted by members inside and outside the scientific community, is that this particular tradition is intellectually flabby, historically oblivious, and grossly reductionist. And Dietrich does almost—almost—nothing to buck these trends.

Like most of his predecessors, particularly the new atheists to whom he's largely indebted (just read the footnotes!), Dietrich makes much of the "war" that supposedly exists between science and religion. But rather than work out an argument that might lead him to victory, Dietrich takes a clever shortcut: simply declaring it on the first page. The preface notes:

This book is about the war between science and religion: about how science has won this war so thoroughly that it can explain why religion will not go away, why there are people who choose God over science.

If this sounds absurd, that's because it is. Really, a "religious" person could make the same case on the same grounds simply by inverting the key terms. But again, Dietrich's logical gymnastics are not the biggest problem with the "war-between-science-and-religion" mantra of late modernity to which he is so intent on marching. The real problem is that there is no war because there are no real warriors.

The much touted sides, "religion" and "science," are, to borrow a phrase from T. S. Eliot, phantoms in a phantom war. And sure, phantoms can induce real panic and fear—and they have on either "side"—but they signify no thing particular enough with which to do something constructive, or destructive for that matter. They are crude instruments fit only for crude work.

It's likely we all know people who rely on such broad terms. People who like or detest "food" or "music" or "art." But unless they're very small children or imbeciles, we don't take such statements too seriously without probing for particulars: Are we talking about ratatouille or raisin bread; KISS or Kendrick Lamar; Renoir, Rodin, or Rockwell? More to the point: Are we talking about evolution, or mapping the human genome, or in vitro fertilization, or dark matter? And are we talking with a Scientologist, a Wiccan, a Jesuit, or an Orthodox Jew? Such distinctions elude Dietrich, and the fact that fairly reputable academic publishers persist in allowing critical work that requires surgical precision to be done with such lexical wrecking balls as "science" and "religion" continues to baffle a century on.

But let's take Dietrich at his words, however vague, just for now. If you unravel the argumentative thread of Excellent Beauty, it reads as follows: A) All religions require belief in some transcendent reality; B) Since science can't prove the existence of a "transcendent reality" this is really no reality; C) Therefore, the religious should embrace a strict materialism, the reality that science reveals there to be; D) However, since the material world still contains some inexplicable mysteries—the "excellent beauties"—we must acknowledge that even science has limits; E) Accepting these limits and unknowns will temper both science and religion, ushering in a utopian new science (religion?) that will give all the wonder and worship and community of traditional religion without all the nasty genocide and bigotry and hubris.

For Dietrich, such a move is a win-win: we can throw out the dirty bathwater of religion without losing the spotless baby of our scientifically inquiring humanity.

But the second link in Dietrich's chain of reasoning—the one on which his whole argument hangs—is the weakest. Why should any religion believe that the light of scientific inquiry is penetrating enough, or of the right order and kind, to properly explain the mysterious beliefs of the world's various religions? This is a question Dietrich never asks and so never has to answer. Rather, he wonders: "If we're so confident in religion, why don't we have our most robust scientific methods confirm its ontological claims?"