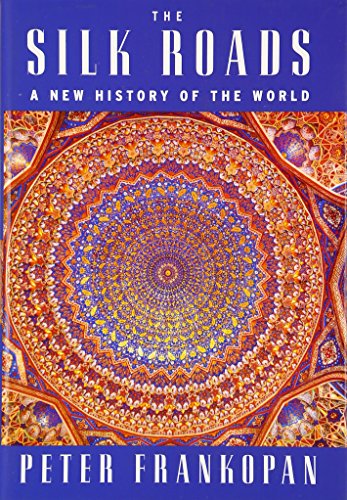 World History from a New Angle

The earth is a very big place.

Yes, it may be growing a bit smaller. (Google "shrinking globe" and you'll find dozens of essays about how interconnected we all are.) But world history projects reveal just how illusory this globalization is. Each country, each region, each town has its own story. Weaving the stories together into one can feel like writing the definitive account of a devastating multi-generational family argument: You're not going to do anyone's version of the quarrel complete justice.

In world histories, every narrative thread distorts some other part of the story. A chronicle that does a marvelous job with Europe warps the Asian past (the Durants); an account that fairly treats the development of East and West leaves out human personality (J. M. Roberts); a tale that balances human interest with political and military developments ignores culture and the arts (that would be me).

Peter Frankopan joins the world history effort with The Silk Roads: A New History of the World. His particular narrative thread traces the encounters of Western and Eastern goods, ideas, and people, as European nations push eastward along the multiple trade routes leading to Asia and Eastern cultures do the same, pointing west; the "Middle East" becomes the matrix where the two collide.

So Frankopan's version of world history begins when Alexander conquers Persia, opening up the trade routes between the two halves of the known world and producing a "vibrancy of cultural exchange" that allows "ideas, themes and stories [to course] through the highways, spread by travellers, merchants, and pilgrims." As he progresses (rapidly) through the centuries, his chapters are structured not around particular events but around dynamic processes that span multiple nations and change them all: the diffusion of Christianity throughout the Roman Empire and its headlong crash into the Persian border ("The Road to a Christian East"); the spread of human trafficking ("The Slave Road"); the violent confrontation of "barbarian" and "civilized" worlds as the Mongols rampage ("The Road to Hell"); the European penetration of the Americas ("The Road of Gold" and "The Road of Silver"); the struggle between Britain, Germany, and Russia to control the oil riches of Persia ("The Road to Black Gold"); and so on, all the way up to the US invasions of Afghanistan and Iraq ("The Road to Tragedy").

As schemas go, this one works pretty much as well as any other, meaning that some of these chapters are insightful while others miss the mark.

Although the "Silk Roads" of the title is intended as a metaphor, expressing the east-west/west-east movement of beliefs and ideals as well as the exchange of goods, the metaphor itself pushes Frankopan unerringly toward finding his explanations in economic factors. In the case of, say, World War I, this produces a shrewd counter-narrative to the traditional British account of brave and sacrificial soldiers resisting German aggression ("inspired," in Winston Churchill's words, "not only by love of country but by a widespread conviction that human freedom was challenged by military and Imperial tyranny"). Frankopan instead centers his admirably succinct (13 pages!) account of the Great War around the establishment of the Anglo-Persian Oil Company and the Ottoman threat to the shipping traffic in the Suez Canal. These commercial interests become the core of the matter, the stacked tinder just waiting for the match; Gavrilo Princip's bullets are almost incidental. It's a somewhat reductionist version, yes, but one-volume world histories have to reduce somewhere, and Frankopan's oil-centered analysis allows him to point directly (and accurately) forward from 1914-1918 to the present: the "control of Persia's crown jewels [by] foreign investors led to a deep and festering hatred of the outside world, which in turn led to nationalism and, ultimately, to a more profound suspicion and rejection of the west best epitomised in modern Islamic fundamentalism."

Frankopan does an admirable big-picture job of sweeping from Alexander the Great to Barack Obama (I am not here suggesting any parallels between the two).

His method doesn't serve him quite as well when he reaches World War II. "The Road to Genocide" was paved, it appears, by purely pragmatic interests: faced with "food shortages and famine, the Germans … began to identify those who should suffer …. The great granaries of Ukraine and southern Russia had not generated what had been expected of them." With "too many people and not enough food," Russian prisoners and Jews were the first up for elimination: "The failure of the land to generate wheat in the anticipated quantities was a direct cause of the Holocaust."

While the economy of 1940s Germany is obviously not unconnected to the horror of the Final Solution, Frankopan fails to offer any explanation as to why Jews were seen as dispensable; the "silk roads" model doesn't lend itself to an understanding of the roots of racial hatred. Nor does it provide a signpost to the present, where anti-Semitism continues to flourish, even in the absence of famine.

But this is not so much a failing of The Silk Roads as an intrinsic flaw in any blueprint for a world history narrative: no single organizing principle is going to work equally well for all countries or for all Major Events. And the briefer the work, the more obvious the flaws: Despite the occasional stumble, Frankopan does an admirable big-picture job of sweeping from Alexander the Great to Barack Obama (I am not here suggesting any parallels between the two) in just over 500 pages. The necessary concision of his coverage means that readers who are already familiar with the basic outlines of world history will enjoy this work more than others, who may suddenly wonder what the Austro-Hungarian Empire is, and why it suddenly appears without warning at the exact moment of its dissolution.

But even readers who find themselves adrift in the dense thicket of proper names and unfamiliar places (The Silk Roads could do with a few more maps, not to mention a decent index) can take away one of the book's central insights, well worth mulling over. Ever since the long-ago collision of "Asian decadence" with "old-fashioned Roman virtues," conservatives (Juvenal and Seneca, back then) have lamented the influx of new cultural influences and feared for the preservation of the old ways. Yet Frankopan's narrative suggests that it is precisely at these points of greatest fear—where we are most protective of our own ways, and most alarmed by the inevitable intrusion of other worlds—that the most unexpected, and elegant, flowerings of culture occur.