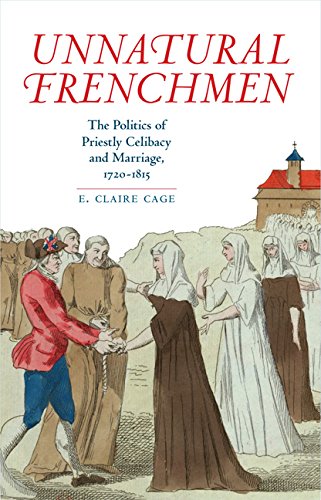 The phrase "same-sex marriage" appears only once in Unnatural Frenchmen, on the very last page, but parallels between Claire Cage's subject and our own time intrude long before that. The campaign against clerical celibacy loomed large in the French revolutionaries' cultural agenda, relative to the proportion of the population that would be affected. Including nuns, the number of clergy and consecrated religious in France was only 170,000, or about one percent of the adult population. But the proportion of Americans who identify as gay is not much greater, and that hasn't stopped our political system from turning itself upside-down over how to accommodate them. In both cases, broader questions about sexuality and the family became caught up in a narrow policy question over whether it can ever be morally and intellectually defensible to ask a tiny fraction of the population to forgo marriage, and the result was a violent but highly illuminating cultural flashpoint.

Of course, clerical celibacy had been officially discouraged by various European governments long before the French Revolution. The earliest German Protestant states offered pensions and dowries to monks and nuns who returned to secular life, paid for out of monastic endowments. Edward VI's law permitting English priests to marry was taken up by thousands of clergymen, who then had to be dealt with when Mary came to the throne. Pope Julius III's dispensation of 1554, which allowed English priests to choose between keeping their wives as laymen or returning to the priesthood, was the precedent cited by Napoleon's representatives in negotiations over the Concordat of 1801—although, as Cage observes, they saw one important difference between Cardinal Pole's situation and their own: they were dealing with Frenchmen. It was scarcely worth offering the option of returning to celibacy, wrote the French delegation, for "the character of the nation opposes it … . It is not our moeurs." Considering how few French priests returned to celibacy, they were probably right.

It is not the fact that the French Revolution attacked clerical celibacy that is revealing, then, but which arguments they deployed against it. Earlier opponents attacked the institution as a crime against innocent bastards and faithful concubines, or as unscriptural Roman overreach, or as an implicit denigration of family life. In the case of the French revolutionaries, their arguments were primarily either utilitarian or legalistic—which may be why they sound familiar today.

The most prominent utilitarian argument was demographic. France needed men to support its military might and its prosperity, therefore priests were undermining the nation by neglecting to contribute their share of sons. Cage counts 1,900 titles on the subject of population published in the thirty years before 1789, so this was a sore nerve—never mind that clerical celibacy's effect on population was negligible, or that within twenty years Chateaubriand would be worrying about the threat of overpopulation. Defenders of clerical celibacy, at least those who allowed themselves to be drawn into empirical arguments, were relieved to be able to point to countries like Sweden that had been more populous before becoming Protestant.

Other utilitarian arguments included the psychiatric and even the physiological. Medical authors claimed that the retention of fluid by celibates would lead to swelling, lethargy, and cancer. It was commonly asserted as a statistical fact that madness and melancholia were more common among clergy and other celibates. One clergyman-doctor suggested in 1798 that prospective monks, nuns, and priests should have to undergo medical screening to assess their suitability for celibate life—an oddly modern-sounding proposal.

More modern-sounding still, in our age of "marriage equality," are the legalistic arguments. Insofar as clerical celibacy was a form of discrimination on the basis of profession, it was deemed a violation of egalité. The most rhetorically powerful ploy of all was to elevate parenthood to the status of a basic human right, which vows of celibacy infringed upon. One abbé Cournand, upon presenting a motion in favor of clerical marriage in a Paris suburb's local assembly in 1790, said that obligatory celibacy violated clerics' "inalienable right … to exist as father and spouse." A 1795 treatise by a married priest argued that becoming a père de famille was a basic right and any act prohibiting it was "fundamentally invalid [and] an attack on liberty."

The debate over clerical celibacy was at its liveliest during the period of ambiguity following the Civil Constitution of the Clergy of 1790, since the issue of clerical marriage is not actually mentioned in that document and would not be settled until the Constitution of 1791. One pamphleteer of the uncertain interim argued that the National Assembly did not even need to clarify its position on clerical marriage, since the right to marry was implicit in the egalitarian decrees already enacted. "Lay people can marry, therefore priests can marry as well." In his eyes, it was a constitutional fait accompli. Eulogius Schneider, a former Franciscan monk who would become a prosecutor of the Terror, echoed this line of argument in 1791: "Priests are men and citizens, and by consequence, they must enjoy the rights of man and of citizen." In the hands of such innovators, the Rights of Man and Citizen proved as accommodating as our Fourteenth Amendment in the search for a never-before-dreamed-of right to marry.

These arguments were not confined to rhetoric—real cases turned on them. Cage recounts the following story:

Prior to the promulgation of the Constitution of 1791, the National Assembly had decreed, without any debate, that canonesses who married would be deprived of their salaries. On September 10, a week after adopting the Constitution of 1791, the Assembly revisited and reopened debate on this issue. Based on the reasoning that depriving married canonesses of their salaries would infringe upon their liberty to marry and therefore would violate the principles articulated in the constitution, the National Assembly decreed that married canonesses could keep their pensions.

Cage does not mention this, but the campaign against celibacy coincided with legal assaults on other socially conservative institutions related to the family, including bastardy laws and restrictions on divorce. Many Jacobins (including Robespierre) had hoped to navigate a middle path on divorce reform, permitting civil marriage for divorced Catholics but also permitting priests to exercise liberty of conscience over whether to affirm such unions. Unfortunately, divorced brides and grooms pressed for the privilege of church recognition and the truce eventually collapsed, with some local authorities threatening to deport priests who refused to marry divorcés.

The thread that runs through all of the debates recounted in this book is the sheer inexplicability of clerical celibacy. The institution simply did not make sense in the limited materialist worldview of the French revolutionaries (an outlook shared by their modern heirs). An unmarried priesthood has some pragmatic advantages, and its French defenders were happy to highlight the way that, for instance, it allowed priests to focus on their parishes and not their private households. But none of these advantages constituted a justification for vows of celibacy the way social stability justified strict divorce laws or family continuity justified strict inheritance laws. The traditionalists quoted in this book seem always to be butting up against the impossibility of explaining clerical celibacy without reference to the Kingdom to which celibacy is a witness.

The same thing that made clerical celibacy baffling also made it threatening. When the Committee of Public Safety called celibate priests "dangerous and suspect men," it was, on one level, simply stating a statistical reality—such priests were more likely to hold counter-revolutionary views. On another level, it was recognizing that men who take on the burden of celibacy for God's sake are always "dangerous and suspect men" in the eyes of an overreaching state. Their sacrifice testifies to an allegiance no government can supersede. France's refractory priests eventually won an earthly victory and the nation's celibate priesthood was restored, which may be more than American opponents of gay marriage can hope for at this stage. But those priests who remained true to their vows even in the face of government harassment had already won a different kind of victory before Napoleon's concordat was signed—a greater and more lasting one.

Helen Andrews is a policy analyst at the Centre for Independent Studies in Sydney, Australia. She has written for First Things, The American Spectator, National Review, and other publications.