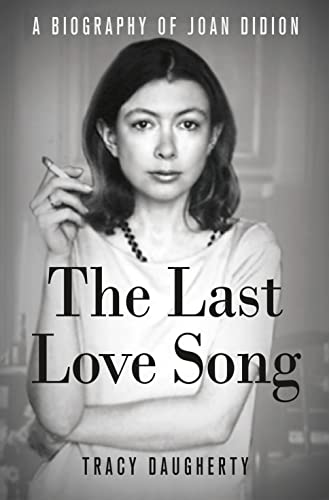 The world as Joan Didion sees it.
January/February 2016

Reviewing Evelyn Waugh's 1962 novel The End of the Battle, the still-emerging writer Joan Didion argued that American literary history is marked by a hunt for Paradise: "Every real American story begins in innocence and never stops mourning the loss of it," she declared, tracing that motif's history from The Scarlet Letter to The Catcher in the Rye.

In The Last Love Song, the first Didion biography, Tracy Daugherty suggests that in this early review, we witness Didion "pondering the roots of her literary sensibility." Those same roots are the subject of his book. He starts not with Didion's birth but with a twinned history of her pioneer ancestors and of California, shaping Didion's history into an arc that fits her own mourning for a lost Paradise.

Even the casual Didion reader can spot that theme in her writing. I noted it myself, writing in Books & Culture after the 2011 release of Blue Nights that "Didion's writing has always been marked by nostalgia, anxiety, and outright fear—sometimes longing for time gone by, often yearning for a place, frequently seeking or half-remembering something that may never have even existed, a golden age or a myth (like the conception of California that has haunted her)."

Daugherty links the lost Paradise motif with three other recurring themes that resonate across Didion's work and life: her love of John Wayne and what he represented to her; her morbid fascination with the Donner Party; and the phrase from the Episcopal liturgy of her youth that tolls, in her mind, like bells signaling doom—"as it was in the beginning, is now and ever shall be, world without end."

The difficulty with being someone's first biographer is that every subsequent biography written about your subject exists in some way as a critical response to the deficiencies in your own book. As if to forestall criticism, Daugherty informs us early on that he's giving us "literary biography as cultural history," a book about America through the lens of Didion's life. The Last Love Song is deeply researched (the endnotes alone take up 117 pages) and richly textured. This is especially apparent when Daugherty is filling in the historical backdrop to Didion's reporting, which is often deeply personal.

But the book is far from riveting, and not just because it's really long. At least two factors got in the way of its success. The first is no surprise: the private and reportedly frail Didion did not agree to be interviewed for the book, and both her husband and her daughter are no longer alive; additionally, a number of the interview subjects Daugherty did talk to have not been in close touch with Didion for decades. When we do have access to the subject's thoughts, it is via her previously published work and interviews. Those who've been reading Didion will find little to surprise them or cast her work in a new light.

This is not really Daugherty's fault, but it does at least raise the question of whether the book was worth writing at all. Certainly biographers have worked under the same circumstances before, and Daugherty makes a valiant attempt to compensate for this in the size and scope of his research. The result is a feeling of distance from the subject that's then covered over with a veneer of intimacy, something Didion herself has very skillfully fostered for her whole career. But here, that trademark manner seems standoffish; Didion's intensity, seriousness, and apparent lack of a sense of humor get magnified.

And while it isn't the job of the biographer to criticize his subject, Daugherty sometimes tips too far over into the kind of adoration that characterizes Didion's superfans. He calls the above Waugh review, for instance, Didion's "sophisticated and poignant struggle to find an effective American voice." There is already a grand enough aura of deity around Didion.

That also helps explain the book's second big problem—it lapses, far too often, into something that reads as if the biographer is trying to imitate the subject's writing. This is always inadvisable, but especially bad when the subject is known for her style. Here, for instance, is Daugherty writing about Didion's technique for character development in her first novel, but sounding a touch too much like a teenager writing poetry on Tumblr:

She was after this same effect in Play It As It Lays, a "fast novel," a method of presentation allowing us to perceive Maria in a flash.

A snake book.
A poetic impulse, surpassing narrative.
Somewhere on the edge of a story.

On the bright side, stylistic stumbles like this make it clear that Didion's prowess, which often appears effortless (a fact that Daugherty skillfully deconstructs elsewhere with a close read), is actually hard to pull off—but that doesn't mitigate the biographer's failure to measure up to his subject.

It's probably true that Daugherty set himself up for failure by writing about one of the best prose stylists in the English language. Didion's skill stems from a natural intuition about and lifelong obsession with the link between the technical and meaning-creation work of writing. In The Year of Magical Thinking, she writes:

As a writer, even as a child, long before what I wrote began to be published, I developed a sense that meaning itself was resident in the rhythms of words and sentences and paragraphs, a technique for withholding whatever it was I thought or believed behind an increasingly impenetrable polish. The way I write is who I am, or have become.

She continues that to write about the death of her husband—the subject of The Year of Magical Thinking—"I need more than words to find the meaning. This is a case in which I need whatever it is I think or believe to be penetrable, if only for myself."

Daugherty knows this, and repeatedly shows her grappling with how language itself shapes what we think of as true. The biography's epigraph begins with a line from Didion's 1977 novel A Book of Common Prayer: "The consciousness of the human organism is carried in its grammar." When Didion was reporting on the Central Park Jogger case in 1991, Daugherty observes, "she couldn't get a police pass into the courtroom, so she analyzed the trial coverage, the language of the headlines, the strategies of the legal teams planting rumors through the very act of denying them." In an interview quoted in the biography, Didion says that her early encounters with Henry James's sentences "made [her] afraid to put words down … . [James] somehow got all of the possibilities into every sentence and I really did not think I could do that."

Words and sentences don't exist in isolation from one another, though. They follow one another, creating stories. Didion mistrusts the ways in which stories are used to manipulate people politically and socially, and she questions whether the stories are even real, even as she is compelled to construct them herself. Daugherty gets this right about her. Writing about her attraction to conspiracy tales in the 1980s, he notes that this "has less to do with the intrigues themselves than with her persistent longing for a narrative, any narrative, to alleviate the pain of confusion." Citing her most famous line—"we tell ourselves stories in order to live"—he writes that "if the story is not readily apparent, we will weave one out of whatever scraps are at hand; we will use our puzzlement as a motivating factor; we will tell our way out of any trap, or goddamn seedy motel."

For Didion, the story has never been "readily apparent." It perished long before she was born, the imagined Eden of old California and John Wayne, a world lost to senseless manipulation, looming now only in imagination. Daugherty notes early in the book that "family lore suggested the name Didion was a derivative of the French Didier, a variation of desiderium: 'unfulfilled longing.' " In the past, he noted, this could refer to a woman's yearning for a child, but had "usually been spiritual in nature."

In that 1962 review of Waugh, Didion had suggested that there is only one antidote those of us who mourn lost Eden in the 20th century are allowed: a "sense of the absurd, the beginning of a kind of toughness of mind." To develop this sense is to purposely set ourselves apart from mainstream culture, because "hardness of mind is antithetical to innocence." With that longing casting a large shadow over her life, Didion has done the only thing she knows to do, rigorously transcribing the world as she sees it and making sure she, and we, never resort to easy comfort.

Alissa Wilkinson is the chief film critic at Christianity Today and an assistant professor of English and humanities at The King's College in New York City. Her book How to Survive the Apocalypse, co-written with Robert Joustra, will be published by Eerdmans in May.