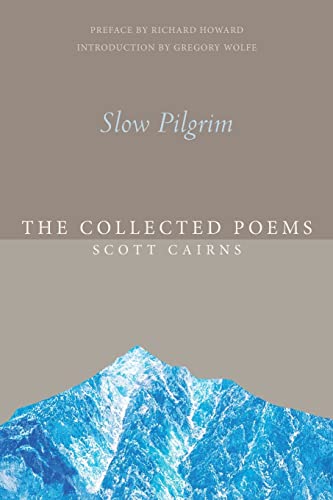 A Promise of a Future Fullness

Some poets are preoccupied with a single question, and Scott Cairns is one of them. Despite the breadth of his Collected Poems, a big volume that includes a selection of juvenilia and previously uncollected poems along with everything from his books to date, Cairns regularly turns to the question of faithful language. How can we speak truthfully about ourselves and the world, and how can we speak truthfully about God?

For Cairns, one answer—among others—is to be a little sexy. Surprised? Welcome to Scott Cairns' world.

The first poem of the volume (after an address to the reader) is "Taking Off Our Clothes." "Let's pretend," Cairns writes, "for now there is no such thing / as metaphor; you know, waking up will just / be waking up, darkness will no longer have to be / anything but dark; this could all be happening / in Kansas." And "taking off our clothes" would also be just that:

We'd have nice blue sheets and a wool blanket
for later. I could be the man and you could be
the woman. We'd talk about real things, casually
and easily taking off our clothes. We would be
naked and would hold onto each other a long time,
talking, saying things that would make us
grin. We'd laugh off and on, all the time
unconcerned with things like breath, or salty
skin, or the way our gums show when we really
smile big. After a little while, I'd get you a glass of water.

It may sound odd for a poet to wish—if only momentarily—that there's "no such thing / as metaphor," but metaphors can be troublesome things. They simultaneously contain more meaning than we need and narrow it. When we use words like "morning" and "wake," Cairns writes in "Waking in the Borrowed House," "we fool ourselves / by thinking we've imagined all / we say," or we imagine that by naming "the sun lifting past the ridge" we have "given a word / to contain it."

Metaphors can also lie. "We say flight of the imagination," Cairns writes in "Idiot Psalm 9," "but stand ankle deep in silt. We say deep / life of the mind, but seal the stone to keep / the tomb untouched." We are dying, Cairns writes in "Another Elegy," and "dying want / some words for setting down"—that is, we both need and lack them.

The temptation is to see the failure of language as proof that the world is meaningless and to welcome an early death, whose definitive simplicity offers an apparent freedom from our "vague mistakes." "We have stories," Cairns writes in "The Adulterer," "full of unclear language, whole volumes / of wrong names. Each time we find the place / where we can stand our vague mistakes no longer, / we settle into what will pass as sleep." This is the temptation Hamlet faces in his famous soliloquy on suicide, and Keats in "To Sleep."

For Cairns, however, this failure offers hope. The "limit" of poetry is a "proof" of some possible future presence. It offers "a hint of what words might do," he writes in "Impressions," "a taste / of real light and a world of whole men." Or as he puts it in "Articulation": "If, one / fresh morning, I should come to apprehend / how ever full with presence every breath / now is—and even now—I have a sense / my words would grow so heavy as to still. / I suppose that morning then would open / to our eighth day, whose sunrise will not set." While language is "never exact" and meaning always slips, the temporary presence that poetry creates is a promise of a future fullness.

So what does this have to do with sex? Well, sex is one thing that proves that metaphors do actually point to something. In fact, it is a metaphor, which is why in the opening poem the poet can pretend to ignore others. Sex is "the sudden speech of two as one," Cairns writes in "Ode: Erotic World," its intimate language "most engaged, most attentive to / the mystery engraved in this / our common body, blessed with both // the pulse of animality / and Spirit's animating breath." Sex reminds us of our true selves—of our dual nature—as animals created in the image of God, but it also embodies the meaning of love. In this sense, it gives us a glimpse of the presence that poetry always points toward but never captures.

If this is the case, one of the tasks of the poet is to avoid contributing to "pretty … fictions" that dull our ability to perceive this partially expressed presence—whether these are the fictions of a theology that leaves no space for mystery or those of Wallace Stevens, for example, whose theory of poetry as a "supreme fiction" transforms art into a mere diversion that, for all Stevens' own verbal virtuosity, is oddly dogmatic and predictable. According to Cairns, the poet is to "taste and feel" the "vertiginous / assemblage" of "keen articulations" while at the same time recognizing that "full / none of which quite seems to satisfy." This requires a commitment to a clear ambiguity, a perceptible doubleness, and it is why so many of Cairns' poems, like Stevens', with whom he shares both a great deal and very little, seem to turn on a single word.

It's also the task of the poet, paradoxically, to lead us to silence. The end of art, for Cairns, is to force us to face the mystery of a transcendent God who speaks. In the playfully titled "And Yet Another Page and Yet," Cairns asks: "What to make of this collision— / of cluttered mind and cluttered shore?" His answer: "I made not great conclusion, save / to shed my walking gear and swim." For the Orthodox Cairns, the practice of silence (as well as that of living, properly understood) offers a respite from our "roiling confusion" because it is one of poetry's proper ends.

Another answer to the question of how to speak faithfully is to speak with a good measure of compassion and humor for human frailty. Cairns regularly addresses the poor and neglected in his work, because the poor are so clearly here and because our natural bent is, wrongly, to ignore them. This is, again, part of Cairns' poetics of testament, but it's also a moral act that calls us to acknowledge the unhappy state and weakness that we share with those less fortunate. In "Infirmities," he writes that "the way the blind boy / laughs when he stumbles / makes you laugh with him some mornings. / Some mornings it hurts to see." Faithful poetry helps us to see the boy and ourselves, however much this might hurt. Put another way, if the poor, as Cairns writes in "Blesséd "have no effectual recourse against / the blithe designs of the rich," one of the purposes of poetry is to become the voice of the "mute" and "maligned."

Of course, this does not mean that Cairns is a heavy-handed moralist—far from it. One of the pleasures of his work is his observation that our intellectual limits and physical weakness are pretty funny in the divine scheme of things. Our pilgrimage to self-knowledge, to a proper silence facing our Creator, and to love for our fellow human beings is a slow one indeed—hence the title of Cairns' collected poems—but it's also a comedy of errors, both of our own making and others'.

This comic touch is present throughout Cairns' work but particularly so in his "Idiot Psalms." In "Idiot Psalm 2," Cairns asks God, the "Shaper of varicolored clay and cellulose, O Keeper / of same, O Subtle Tweaker, Agent / of energies both appalling and unobserved," to keep him "sufficiently limber that I might continue / to enjoy my morning run among the lilies / and the rowdy waterfowl, that I might / delight in this and every evening's intercourse / with the woman You have set beside me," and that he might "awaken daily" with "a giddy joy, / the idiot's undying expectation, / despite the evidence." And in "Idiot Psalm 7," he complains, somewhat more seriously:

And lo, the fraught perplexities accrue,
collude, compound, and hasten to compose
before us now and, yea, extending far
as we might squint into the distance

The ball may have rolled off the court of our lives, but it hasn't in Collected Poems. Cairns' precision and whimsy regularly break through our petty defenses to teach us something about ourselves and our Maker. This is the name of the game, and Scott Cairns can play.