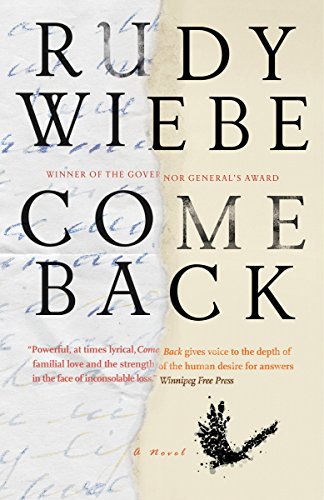 Crying from the heart.
November/December 2015

Rudy Wiebe's novel Come Back begins on a snowy April morning in Edmonton. Retired English professor Hal Wiens is enjoying his daily coffee with his Dené friend, Owl, in a downtown coffee shop when their attention is drawn outside the shop window by a raven flitting from streetlight to streetlight. Knowing Wiebe's lifelong preoccupation with aboriginal cultures, knowing also that ravens, in Native myths, bring messages from the spiritual realm, the reader senses the bird is a harbinger of events about to happen.

And happen it does. Only moments later, Hal's world is rocked when he sees a slender man dressed in an orange down-filled jacket stride past the window. Hal recognizes the jacket, the young man's figure and gait, and is convinced it is his son Gabriel. But this is an impossibility: Gabe committed suicide 25 years ago.

"Gabe!" Hal shouts. He rushes out of the coffee shop in pursuit and dashes into the street's heavy traffic, causing a tangle of accidents. He fails to catch up to the young man, returns home before the police can arrest him, and collapses on his kitchen floor.

Still going strong at 80, Wiebe has been a major figure in Canadian literature since the 1960s. He is a main practitioner of the prairie novel, has written extensively and insightfully about aboriginal peoples, and is the founder of a robust tradition of Mennonite literature in Canada. Wiebe has won the Governor-General's Award for fiction twice, the Charles Taylor Prize for nonfiction, and has been named an Officer of the Order of Canada. Come Back is his 25th book.

Readers of Wiebe's first novel will recognize Hal Wiens, who was an eight-year-old boy in Peace Shall Destroy Many. Now 75, Hal is a widower, his beloved wife Yolanda having died only seven months ago. Hal's grief is so deep that he has not disturbed a thing in the house since Yolanda's death. He won't so much as "move her last novel or hairbrush on her night table, nor water a plant." Nothing in the house is "left alive." All Hal has is his painful memories of Yolanda, and "silent rot."

He has numbed his grief by relying on mundane activities: drinking coffee with Owl; phoning his surviving daughter and son, who live in distant cities; suppressing his pain and telling himself "he was fine, just fine." Sighting the young man in the orange down-filled jacket that morning, however, shakes Hal's daily routine and reminds him of September 8, 1985, "that day of irreducible memory" when he was informed of Gabe's suicide at the age of 24. Now Hal's "day is cracked wide open to that remorseless memory always poised to strike."

Realizing he must try once more to understand what caused his son to take his life, Hal is forced to the basement where Yolanda had filed away Gabe's personal effects and journals in stacks of carefully labeled boxes. "It had to be done," Hal realizes: "face Gabriel's writing."

From this point forward, the novel consists of two interwoven narrative threads. The first portrays Hal as he spends the next three days reading through Gabe's writings and recalling memories of his son. The second gathers fragments from the jumble of Gabe's writing: the diaries, letters, lists, and journals he left behind. The journals describe Gabe's travels across various countries of Europe, finding work at the national Film Theatre after his return home, his response to days spent watching films—and, most significantly, his infatuation with Ailsa, the 13-year-old daughter of family friends.

When Gabe himself describes Ailsa as "an extremely typical very young teenager with childish traits" and his attraction to her as "unimaginably dangerous," the reader may be reminded of Nabokov's Lolita. Why the obsession? Gabe admits he has made of Ailsa "a legend," suggesting that perhaps she is for him an ideal of pure and uncomplicated beauty, something he never found in his messy life. But whatever the reason, a 24-year-old man's fixation on a girl of 13 will discourage some readers from continuing with the book.

Those who persist may well find that pages and pages of Gabe's tortured, chaotic, and self-absorbed ramblings—at one point 28 agonizing pages in a row—are hard to take. Gabe himself admits his writing is "mindless dribbly stuff," "the same trivial things over and over in the same childish way." This reader tends to agree; maybe Wiebe should have exercised more concision.

Certainly the journals provide a window into Gabe's painful struggles. "All my life," he writes, "I have been alone, even with my family that I love." And later he says, "It's not that I don't want to live, it's that somehow I've lost a means by which to function." He expresses despair at feeling distant from God, and in turn anger toward God for his seeming absence: "I would rather burn in hell than go to a 'Father' who just creates and then leaves you on your own." A final possible cause of Gabe's death is depression over his unrequited and impossible love for Ailsa. As he says in frustration, "I need a lover and A is a child."

The reader's sympathies are strongly with Hal, whose encounter with the words of his long-dead son re-opens the wound of grief and guilt (Hal was out of town when his son's body was discovered). "Why are there so few facts about us," he laments, "you and me being together?" Echoing King David, Hal keens, "O Gabriel my son, O my son, my son Gabriel."

The novel gains poignancy for those readers who know that Rudy Wiebe's own son Michael also committed suicide at the age of 24 in 1985. But it would be prudent to avoid viewing the novel as autobiography. Wiebe himself warns of this danger. "Fiction is what you make of a fact," he says (a bit pedantically, perhaps). "Fiction is an imagined construct which may be triggered by fact. This is what imagination does."

In contrast to Canadian writer Miriam Toews, who has written critically of her Mennonite roots and whose latest novel All My Puny Sorrows also deals with the topic of family suicide, Wiebe shows a more compassionate and gentle tone toward his community. In the throes of grief, Hal, a devout Mennonite, finds spiritual consolation in his upbringing: remembered childhood songs and evening prayers, familiar lines from old hymns, and texts from Scripture. The novel's title, Come Back, is therefore not so much a command as a prayer.

After police knock on his door in response to the accidents he caused with his mad dash that snowy morning, Hal escapes to the family cottage at Aspen Creek, waiting for an answer to the agonizing question asked by every parent whose child has committed suicide: "Why?"

Wiebe offers no glib answers. Still, the reader discerns hints of meaning. Come Back opens with two epigraphs; the first gives us Jesus' words recorded in Mark 9:49: "For everyone will be salted with fire," a paradoxical image that suggests both preservation and purification. As the apostle Paul states in Romans 5:3-4, human suffering is a refining fire that leads in turn to perseverance, character, and hope.

The second epigraph consists of the familiar words of 1 Corinthians 13:12: "For now we look through a mirror into an enigma, but then face to face," which suggests that humans may never understand the tragic loss of a child but also affirms with steadfast faith that someday all will be revealed. As though he had Paul's words in mind, Wiebe says, "The hope, the faith, the love within human spirituality are the realities that become most powerful in the lives of the novel's characters, though they cannot, of course, experience these realities fully. At least not yet."

Come Back offers honest and eloquent testimony to this profound faith, hope, and love.

Hugh Cook is professor (emeritus) of English at Redeemer University College in Ancaster, Ontario, and the author of four books of fiction. The latest, a novel titled Heron River, was reviewed in the July/August 2012 issue of Books & Culture and is available at www.mosaic-press.com.