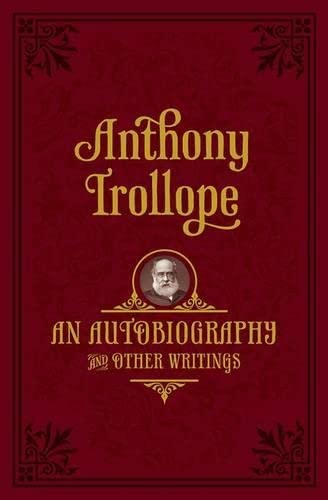 How the novelist's "Autobiography" has been misread.
November/December 2015

The age of Victorian bicentennials is upon us, each year offering new occasions for readathons, wreath-laying ceremonies, and repackagings billed as "anniversary" editions. Among this year's bicentennarians is Anthony Trollope, and, to mark the occasion, Oxford University Press has issued a keepsake edition of the posthumously published An Autobiography (1883). A sturdy octavo hardcover, it features a bound bookmark and wears a red dust jacket adorned with a frilly Victorian border and an inlaid image of the author's bearded and spectacled face (with the full portrait on the back). It's the perfect gift for the Trollope enthusiast in your life. But I'm hoping that this edition will be read, not merely cherished as an object, for here at last is a modern version alive to the book's charms and schemes and thereby capable of registering its continuing interest.

For this we can thank the editor, Nicholas Shrimpton, emeritus fellow of Lady Margaret Hall, Oxford. Shrimpton's superb introduction, notes, and editorial practice will delight those already familiar with the book as well as newcomers. He clearly wishes us to enjoy the reading and, to this end, acknowledges that the quality of Trollope's narrative may strike some as uneven. He observes, for example, that "the later chapters are, intrinsically, rather dry and external in their focus." Few editors would make such an admission, given its tacit permission to skip or to skim the section in question. Engaging explanatory notes (indeed, if space allowed I'd quote quite a few) concentrate on the lively characters and incidents of the Victorian literary scene to the almost complete exclusion of scholarly reference. (The "Select Bibliography" stored among the front matter fulfills this office sufficiently.) Above all, this new edition punctures three myths that have dogged An Autobiography and thereby hampered its appreciation

Many readers avoid the book, or arrive with low expectations, because of this outdated gossip. In fact, the overwhelming majority of the contemporary reviews were positive, appreciations appearing in The Times, Daily Telegraph, Spectator, Athenaeum, Academy, Edinburgh Review, and Blackwood's Magazine, among other papers and journals. Some reviewers did find fault, though, particularly related to myth #2 below. Trollope's account of his writing methods seemed to them overly mechanical and thus unartistic. In The Cornhill Magazine, James Payn was astonished by the almost "savage pleasure" Trollope seemed to take in "demolishing the theory of 'inspiration.' " Trollope's "downfall in the eyes of critics" (as misreported by Wikipedia and other outlets) amounts to nothing more than his declining stature in the 1890s among a new generation of critics enamored with the aesthetic theories of Walter Pater and Henry James. All of the High Victorian realists suffered this fate. Trollope is unusual, though, Shrimpton observes, insofar as his novels "stayed in print throughout the first half of the twentieth century, the period when Victorian art and literature were routinely dismissed, retaining a popular readership despite the academic disapproval or neglect to which they were subjected."

Unfortunately, even Trollope-lovers in the early 20th century gave too much credit to the naysayers, promoting this myth in their apologies for An Autobiography. Michael Sadleir, for example, told readers of the 1923 Oxford World Classics edition that An Autobiography had "extinguished its author's good name for a quarter of a century, and vanished." Sadleir's Trollope: A Commentary (1927) made matters worse by depicting An Autobiography as Trollope's final salvo: "from beyond the grave he flung in the face of fashionable criticism the aggressive horse-sense of his views on life and book-making … then did the tempest of reaction against his work and against all the principles that it represented break angrily and overwhelm him." Freed of this catastrophic history, An Autobiography opens now to readings that require no special pity, wariness, or defensiveness.

An Autobiography presents an unflattering portrait of Trollope's writing methods.

When speaking of Trollope's "horse-sense" on "book-making," Sadleir has in mind passages like this:

I have not once, through all my literary career, felt myself even in danger of being late with my task. I have known no anxiety as to "copy." … And that little diary, with its dates and ruled spaces, its record [of pages written] that must be seen, its daily, weekly demand upon my industry, has done all that for me.

There are those who would be ashamed to subject themselves to such a taskmaster, and who think that the man who works with his imagination should allow himself to wait till—inspiration moves him. When I have heard such doctrine preached, I have hardly been able to repress my scorn … . I was once told that the surest aid to the writing of a book was a piece of cobbler's wax on my chair. I certainly believe in the cobbler's wax much more than the inspiration.

Critics were well aware of Trollope's industry and habits prior to the publication of An Autobiography (a fact hard to miss given his prodigious output). But the book still surprised some—such as Payn at The Cornhill—with its emphatically pragmatic depiction of the writing life, particularly in Trollope's account of the "self-imposed laws" that governed his writing sessions and production schedule (which he, clerk-like, tracked in that "little diary"). Stuck to his chair, as it were, he boasted of writing an average of 40 pages per week.

With such remarks, Trollope staked out his position in the day's debate concerning the status of career authors. "Literature has become a profession," Trollope's friend G. H. Lewes had written in 1847. "It is a means of subsistence, almost as certain as the bar or the church." Among the chief aims of An Autobiography, Trollope tells his readers in his first sentence, is to describe "the opening which a literary career offers to men and women for earning their bread." He portrays himself throughout as the consummate professional—one, in fact, successful in two professions simultaneously before his returns on literature allowed him to step down from a high-ranking position in the postal service. The book lavishes attention on practical concerns such as deadlines, contract negotiations, steady production, and sales receipts. These are, of course, opportunities for Trollope to parade his triumphs—for example, listing his income book-by-book in the final chapter. But he was also revealing to the public the rigorous accounting—of time and money—that marks so many of the major Victorian writers' diaries and correspondence, and, indeed, constitutes one of the distinctives of authorship in the period.

Shrimpton chides readings such as Payn's for overlooking obvious evidence that Trollope's account "of the creative process is actually more complex" than sitting on wax and drinking coffee. Trollope, for example, described his ideal working conditions as "some quiet spot among the mountains,—where there has been no society, no hunting, no whist, no ordinary household duties." Such locales gave raise to "the best truth and the highest spirit that I have been able to produce. At such times I have been able to imbue myself thoroughly with the characters I have had in hand. I have wandered alone among the rocks and woods, crying at their grief, laughing at their absurdities, and thoroughly enjoying their joy. I have been impregnated with my own creations." The lonely artist wandering in nature gives himself wholly over to the imagination: as Shrimpton notes, Trollope lapses here into the Romantic account of inspiration that he elsewhere disparages. Strikingly, though, the Romantic paradigm is given a professional spin: these trips to the mountains, Trollope brags, "trebled my usual average" of pages per day.

An Autobiography is not an autobiography—or, at least, not an important one.

For some readers An Autobiography has seemed, as Shrimpton writes, a "mere memoir, or self-help manual, rather than … a genuine exploration of the self." Trollope himself doesn't help matters, referring to the book as a "memoir" in his instructions to his son regarding publication (cited in Henry Trollope's preface) and wobbling on its status in the book's opening sentence ("for the want of a better name, I shall be fain to call the autobiography of so insignificant a person as myself"). Shrimpton clarifies matters, situating An Autobiography alongside Mill's Autobiography (1873) and Ruskin's Praeterita (published intermittently from 1871 to 1889) as important Victorian responses to Romantic autobiography. Following the example of Rousseau's Confessions, the Romantics had organized "autobiography" (a new word in the 1790s) around the question "Who am I?" and sought answers in the depths of a "complex, mysterious, fascinating, and ultimately unstable" self. Trollope, Mill, and Ruskin attempted to "specialize" autobiography, Shrimpton argues, "still asking 'Who am I?' but confining the enquiry to a particular area of the author's life." Thus, Mill concentrates on the intellect; Ruskin "traces the development of a sensibility"; and Trollope chronicles "the creative capacity that produced more major novels than any other writer in English." In this model, the "little details of … private life," as Trollope says in his opening sentence, may be selectively omitted. Trollope is reticent, for instance, about the details of his apparently happy marriage, while Mill's account of his childhood makes no mention of his mother.

Strikingly, however, the very first chapter of An Autobiography offers a heart-rending account of Trollope's childhood brush with poverty, caused by his father's repeated financial blunders, that in many ways recalls Dickens' boyhood, as early reviewers noted (minus the stint in a boot-blacking factory). The book, then, has a profoundly confessional opening, and Shrimpton ably discusses the way in which the later chapters, ostensibly focused on Trollope's "public" life in literature and politics, continue to pose questions about the author's inner life.

Overall, this edition helps its reader to grasp the experimental nature of An Autobiography. Here Trollope attempts what we might call a "professional autobiography," and Shrimpton is absolutely right to conclude that "No picture of the possibilities of autobiography as a form is complete without it."

Richard Gibson is associate professor of English at Wheaton College. He is the author of Forgiveness in Victorian Literature: Grammar, Narrative, and Community (Bloomsbury).