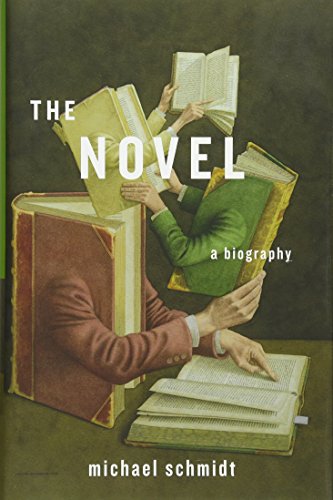 The rise of the novel and the modern self.
November/December 2015

Rare in contemporary literary criticism is the scholar who betrays a love for literature. Ever since literary theory took the reins of English literature, disdain of actual affection for the subject seems to be the vogue. Theory's tyranny over the last quarter of the 20th century is something like that proverbial operation which was deemed a success even though the patient was lost. How refreshing, then, to encounter in Michael Schmidt's The Novel: A Biography not a theory of the novel, but a life.

And what a life it is.

Schmidt is a literary figure in his own right. Professor of poetry at Glasgow University, he is himself a prolific poet, and his habitual attentiveness to the texture of language is evident here. Cormac McCarthy, he tells us, "builds long sentences and heavy emphases by piling up clauses, linking sentences by conjunctions in a breathless, uninterrupted aria followed by runs of dialogue, sometimes meditative, often staccato for contrast." As William Deresiewicz observed in his review of The Novel for The Atlantic, Schmidt "carries English literature inside his head as if it were a single poem." Perhaps this explains the book's lack of footnotes, a feature alternately fitting and frustrating, but probably the only significant omission in this intimidating tome of over 1,000 pages covering hundreds of novelists and their kin. Guided by "a sense of canon," albeit a canon unstable and open, Schmidt arranges his examination both chronologically and thematically, taking into account the influences and developments that have shaped the novel for hundreds of years. The Novel is at once encyclopedia, history, and "biography."

A biography of the novel is a particularly apt approach for this genre. That the novel is the literary expression of the modern self is axiomatic: a study of its history, growth, and various iterations is, in a sense, a study of the modern self, a portrayal of an actual person in all her complexities, along with her family tree consisting of abundant and gnarled branches of great grandparents, in-laws, step-uncles, kissing cousins, siblings, and offspring.

Schmidt begins where any genre study must—with definition. One might as well try to define Mrs. McSweeney next door. No single definition, no matter how detailed or succinct, can encompass the whole. And for every defining characteristic offered, exceptions abound. Nevertheless, the attempt must be made.

Part of any definition is delineating what the thing is not. The novel's lineage is drawn from a variety of streams, and understanding how the novel is both like and unlike them is especially helpful. Accordingly, Schmidt covers a good amount of the novel's antecedents and influences, including the travel accounts of Bernard Mandeville, the romances of Sir Philip Sydney and Thomas Malory, the parody of Cervantes, the martyrology of John Foxe, the allegory of John Bunyan, the autobiographical fiction of Aphra Behn, the satire of Jonathan Swift, and a long tradition of familiar letters ("a kind of halfway house between private and public utterance"). All have a place in the novel's family tree.

No matter how it ends up being defined (mainly, in retrospect)—as some sort of lengthy, fictitious, prose narrative—the novel was once, as its name suggests, something "new," something magnificently greater than the sum of its parts. In Poetics, Aristotle claimed the heart of imaginative literature to be the imitation of an action. And until the rise of the individual in the modern age, Aristotle's view reigned supreme. But with the novel, the pivot became character, not action. And while the novel is as suitable for plot-centered stories as for character-driven ones, its form is particularly fertile ground for the epistemological shift that Schmidt describes, from literature conveying "the truth" to conveying "a truth." With the rise of modernity, Schmidt writes, "old forms no longer held," and "a writer alive to his time could not presume upon common worldviews" or even "stability." Nor was the novel's own development stable; rather, it see-sawed from the psychological realism of Daniel Defoe and Samuel Richardson back to the classical plot-centered approach of Henry Fielding, to Austen's synthesis of her predecessors' dialectic. So by the time we reach Austen, it's not the story at the center, Schmidt explains, "but the characters, and the sharp wit of the language in which they travel."

Austen's "remarkable" contribution to the novel form, Schmidt writes, was in creating a narrative advanced not by action as much as by a character that is "coming into being." His account of Austen's work—her contribution to the novel's maturity, the connections between her and other novelists, and his brief but acute insights into the works themselves—reflects Schmidt's wildly comprehensive approach in the entire book. In this passage about Austen, for example, his lyrical prose weaves together literary analysis, biography, and cultural criticism:

The principles of permanence are pitted against the principles of change, and the heroine must negotiate the difficult straits between sensibility and sense. Against the ephemeralities of uniforms, plumes, bosoms, the handsome flesh, the whispers of love, and the darkened carriage of misjudgment, stand bricks and mortar that time's fell hand defaces less briskly than it does body and heart. Jane Austen was aware of these realities, being a vicar's daughter, a spinster, a woman made frugal by circumstance and dependent on the goodwill of her relations. Waste not, want not: she did not paragraph her letters, she crammed as much as she could onto a single sheet, writing between the lines, in order to save herself the extra cost of transmission for a second sheet.

Another delightful aspect of The Novel consists of the surprising and insightful connections Schmidt finds among writers. Truman Capote is heir of Daniel Defoe. Jonathan Edwards' style was influenced by Samuel Richardson's Sir Charles Grandison. Austen's Mr. Darcy has roots in some of the most rakish villains in English letters, such as Mr. B of Samuel Richardson's Pamela and Lord Orville of Frances Burney's Evelina. George Orwell and Burney both demonstrated a shrewd ability to exploit the "old boy network" in currying favor for their work. Kurt Vonnegut is Bunyan's "chief heir." An "ambitious and hubristic" Jack Kerouac "compares his mature style" to that of Fyodor Dostoevsky "and sells the Russian short."

With writers clustered in chapters with themes such as "The Eerie," "Elegy," "Propaganda," and "Pessimists," The Novel is more revelatory (and interesting) than a merely chronological account would be (if such a thing were even possible). Nathaniel Hawthorne, Herman Melville, and Harriet Beecher Stowe, for example, are joined in a chapter called "Thought-Divers." The theme of "Pariahs" brings together Franz Kafka, J. D. Salinger, Saul Bellow, and Bernard Malamud. Vladimir Nabokov, Ayn Rand, Thomas Pynchon, and Jonathan Franzen find themselves bedfellows in "Enchantment and Disenchantment." And, fittingly, Laurence Sterne gets his own chapter. Tristram Shandy, the 18th-century work many critics consider to be the first postmodern novel, is, Schmidt says, "a novel with its roots in an unconventional holy ground."

And this, for many of us, is exactly what the novel is: unconventional holy ground in this wholly secular age.

Protestantism's emphasis on the individual is reflected in the ordinary characters that serve as the novel's protagonists. Schmidt quotes John Updike observing, "Without souls to save, are mundane lives worth writing?" As the Protestant Reformation sought to usher individual souls into heaven, the novel became Protestantism's purgatory.

In addition, efforts to translate the Bible into English, Schmidt explains, brought about the age of prose and an emphasis on language's ability to convey meaning over rhetorical style. Between the literary poles of truthful didacticism and imaginative art, there grew a space filled by fiction—a lie that reveals truth. The novel "is a way of telling the truth, in part because it wears the mask of truth and marshals facts and seeming facts into plausible narratives."

This "taste for fiction develops," Schmidt explains, "when readers and writers grow uncomfortable in a posture of subordination to ecclesiastical or political power." The novel offered a means by which "corrupt or ineffective institutions" could be "probed and tested by language." And out of the "dissenting conscience" of "Puritans and women," primarily, the novel arose. The allegorical Pilgrim's Progress was "original without meaning to be," both entertaining and instructive. In the next century, another Puritan, Daniel Defoe, offered a moral aesthetic, a pattern which is "scriptural: temptation, counsel, wrong action, recognition, acceptance of punishment, repentance, and restitution."

Karen Swallow Prior is professor of English at Liberty University. She is author most recently of Fierce Convictions—The Extraordinary Life of Hannah More: Poet, Reformer, Abolitionist (Thomas Nelson).