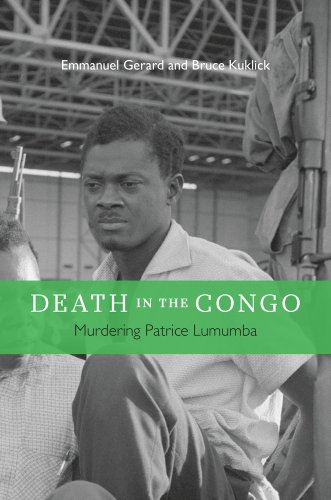 The death of Patrice Lumumba.
November/December 2015

In late January 1961, a Belgian man named Gerard Soete drove near the border between the Congo and Rhodesia. There, he and an assistant exhumed three buried corpses Soete had recently helped inter. They took a hacksaw and severed arms, legs, and heads from the bodies, then placed the "chunks of rotting flesh" in barrels filled with sulfuric acid. Eventually, they ran out of acid and burned the remaining flesh and bones. Among other items, Soete kept a set of teeth as a keepsake. "We did things an animal would not do," Soete later recalled.

One of the corpses was that of Patrice Lumumba, who the previous June had become the Republic of Congo's first prime minister after nearly seven decades of Belgian colonial rule. Lumumba was a nationalist and pan-Africanist who quickly acquired an array of powerful enemies. The Belgians resented his scathing denunciations of their fallen empire. Along with some members of the Western alliance, the United States government feared that Lumumba was a closet communist who would provide the Soviets with an African beachhead. Lumumba had plenty of internal opponents as well. The new state's borders represented a colonial fantasy. Separatists in the southeastern province of Katanga, led by Moïse Tshombe, formed their own breakaway state with halting Belgian support. The new nation immediately descended into chaos.

In Death in the Congo, historians Emmanuel Gerard and Bruce Kuklick unravel as much of the mystery surrounding Lumumba's assassination as possible. In particular, they give careful attention to both Belgian and American government records. The result is a sober and sobering unmasking of feigned innocence.

Who was to blame for Patrice Lumumba's death? Gerard and Kuklick refer to Agatha Christie's Murder on the Orient Express, in which detective Hercule Poirot discovers that twelve suspects have all participated in a murder. Each struck the victim with a dagger. Which was the lethal blow? In Lumumba's case, the question is not a simple matter of which men fired the shots that killed him, but rather who bears the great culpability for arranging his death.

Many factors and individuals in some way contributed to Lumumba's assassination. Lumumba's government had no chance from the start. Belgian civil servants fled the country. Lumumba had very imperfect control over a disorganized army. Separatists in various regions of the Congo saw their chance to break away from Leopoldville. Belgium quickly intervened to rescue its own citizens and, at the same time, undermine Lumumba's authority. In July, the prime minister, along with President Joseph Kasa-Vubu, severed relations with Brussels and asked the United Nations to send an international peacekeeping force to the Congo. Dag Hammarskjöld, the Swedish secretary-general of the UN, obliged.

In August 1960, President Eisenhower presided over a meeting of his National Security Council. CIA director Allen Dulles alleged that Lumumba was on the Soviet payroll, and Eisenhower insisted that the UN should remain in the Congo in order to check Lumumba's potential power. An NSC memorandum recorded a decision that the administration would take "appropriate action" to prevent Lumumba from expelling UN peacekeepers. Robert Johnson, the staff member who drafted the memorandum, later testified that Eisenhower gave "an order for the assassination of Lumumba." Other officials denied this claim. Publicly and duplicitously, Eisenhower called on governments to eschew "subversion, force, propaganda, or any other means" of interfering with the internal affairs of the Congo.

Kuklick and Gerard conclude that Eisenhower expressed a desire that Lumumba die. Stung by Fidel Castro's rise to power in Cuba, Eisenhower feared that Lumumba too would embrace the Soviets. At the same time, especially in the face of Charles de Gaulle's insistence on French prestige and quasi-autonomy, Eisenhower sought to maintain the Western alliance's unity against communism. Paul-Henrie Spaak, the Belgian Secretary-General of NATO, compared Castro to Lumumba. "If the president expected his European allies to take his side in Cuba," Gerard and Kuklick explain Eisenhower's reasoning, "he should take theirs in the Congo." Thus, Eisenhower himself may not have placed that much weight on Lumumba, and Dulles was apparently even less interested in orchestrating his demise. Nevertheless, Eisenhower's at least tacit approval prompted CIA operatives in the Congo to actively plot Lumumba's assassination.

Meanwhile, politics in both Belgium and the new Congo were a mess. Belgium's King Baudouin attempted to force aside a prime minister he did not like, and he courted Katanga's Tshombe as a means of clinging to the royal family's colonial fantasies. Belgian officials persuaded President Kasa-Vubu (head of a rival political party) and Colonel Joseph Mobutu, the Congolese army's chief of staff, to sack Lumumba in early September. However, Kasa-Vubu and Mobutu lacked the popular support to install a replacement government, and the army—for the time being—was too weak to pacify separatist movements. Under virtual house arrest for weeks, Lumumba managed to flee Leopoldville that fall. In early December, however, Mobutu's forces captured him.

About the only thing that brought together Kasa-Vubu, Mobutu, and Tshombe, as well as the Belgian and US governments, was their belief that Lumumba's survival posed a clear threat to their interests. Thus, they all preferred Lumumba's "neutralization" or "elimination." No one involved, however, wanted "dirty hands." The Americans and Belgians wanted Africans to kill Lumumba. Thus, the Congolese government persuaded Tshombe to permit Lumumba's transfer to a prison near the Katangan city of Elisabethville. Lumumba's political opponents, encouraged by Western diplomats and operatives, sent him to his certain death. Once in Katanga, Lumumba was dead within hours.

Perhaps the one man who might have rescued Lumumba was Dag Hammarskjöld, who has often earned praise for his Reformed Protestant sense of humanitarianism and rectitude and his desire to develop the UN into a vigorous institution in its own right. In August 1960, Hammarskjöld attempted to stabilize the Congo without allying himself to any of the country's politicians. Ultimately, though, he concluded (without even moderately persuasive evidence) that Lumumba was a "Hitler" who might commit "genocide" against minorities in the Congo. Thus, according to Gerard and Kuklick, Hammarskjöld and the UN "collaborated" in Lumumba's murder. "Hammarskjöld did not exploit the military force he had," they assert, "and was unwilling finally to cross the Western powers."

Death in the Congo is painstaking in its detail. Gerard and Kuklick carefully note gaps in the record, such as the relative lack of documentary evidence about the key Congolese actors in the story. For instance, they can offer little insight into Lumumba's state of mind during these critical months. The authors' conclusions are measured, as in their discussion of Eisenhower's role. But they also move beyond the grim and ultimately macabre details of the Lumumba assassination to reflect on the relationship between international politics and morality:

Statesmen struggle to justify actions that in the nature of things have little to do with the moral; malice and self-interest are never far from public life. Politics, ambitious to tame the irrational, itself participates in the irrational.

Gerard and Kuklick recognize that "the norms of private life and of a polity regulated by law are only with difficulty invoked in global politics." Individuals from Eisenhower to CIA station chief Larry Devlin made decisions they believed to be necessary and in the best interest of both the United States and Africa. Many westerners complicit to some degree in Lumumba's murder acted in almost complete ignorance of the Congo. Some could not have found the new nation on a map of Africa. They deluded themselves that they could get rid of Lumumba without getting their hands dirty in the process, and they deluded themselves that the Congo and West Africa would be better off with Lumumba dead than alive. The plight of the Congo (renamed Zaire in 1971) under Mobutu illustrates their folly.

Eisenhower, however, would never have confused the morality of international politics with that of "private life." He knew the difference. Thus, Dag Hammarskjöld was perhaps the most complete in his delusion. "Hammarskjöld's transcendent identification with Christ's redemptive suffering on the cross for fallen mankind," Gerard and Kuklick write, "assured the secretary-general of his unpolluted honor." In September 1961, still trying to broker peace between Leopoldville and Katanga, Hammarskjöld died in a suspicious plane crash en route to a meeting with Tshombe. The Swede became a martyr for the cause of international peace. Hammarskjöld's ideals merit respect, Gerard and Kuklick suggest, but his honor too was polluted.

The authors' conclusions resemble those of Reinhold Niebuhr, who insisted that human beings cannot escape the realities of injustice and sin. Politicians should act against injustice rather than give comfort to tyranny, but they should do so without self-righteousness or utopian delusions. In this case, the West pegged the wrong man as the Congo's future tyrant. Niebuhr wrote, on the eve of World War II, that "political controversies are always conflicts between sinners and not between righteous men and sinners." In the newly independent Congo, none of the political actors exhibited a heart free from darkness.

John G. Turner teaches religious studies at George Mason University and is the author of The Mormon Jesus: A Biography, forthcoming from Harvard University Press in 2016.