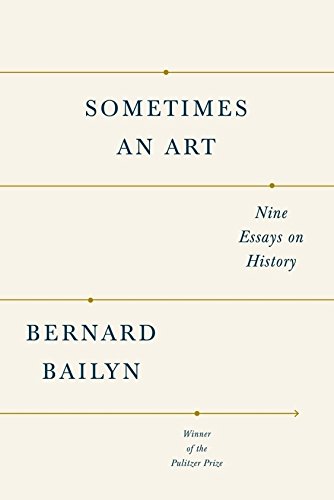 How to Write History

Bernard Bailyn survives as the only member of the group of American historians who last commanded more than professional attention, and who wrote with authority not just for the Organization of American Historians but for a public that now hungers after serious history. This elite included Bailyn's peer Edmund Morgan, and C. Vann Woodward and Richard Hofstadter. Sometimes an Art, a collection of essays that Bailyn has selected to represent his concerns at the end of an extended career, has in fact an elegiac dimension.

Long emeritus at Harvard, Bailyn wrote these essays over fifty years. The earliest dates from 1954, the most recent from 2007, although the center of gravity rests in the 1980s with work now some three decades old. Two of the compositions appear for the first time, and a few have had some minor updating although most have been printed here as they were initially published. Read in an appropriate order, the essays show Bailyn's evolution from a biographer and political historian of the American Revolution to an expert on England's trans-oceanic diaspora from 1500 to 1800. All nine items can be read with interest, more than interest; and for an amateur, as I am in history before the 18th century, they illuminate despite their age, and despite what Bailyn calls their "occasional" nature. The illumination stems from Bailyn's sweep and scope, and his stunning and lucid prose. The title of the book also suggests an underlying theme: Bailyn explores the assumptions that undergird historical accounts, as well as giving us accounts of the Atlantic past.

What about the Atlantic past?

Colonial America was what you used to study in the first-half of the US history survey at college—"America to the Civil War." The course concentrated on underclassmen's appreciation of the Revolution and the Constitution. This history has metamorphosed to investigations of "the Atlantic world" from the 16th to the early 19th century. Requirements sometimes still mandate that undergraduates take the class, but the students find themselves bored and confused: the politics of the late 18th century become ancillary to the spread of assorted folk from England, Scotland, Spain, and Africa to places where they were not born. The quest for economic markets and profits, and poverty in Britain especially, upend settled conditions on both sides of the Atlantic. Educators at schools of higher learning report on various forms of early-modern misery, coerced labor, and the destruction of aboriginals. Late adolescents have it drummed into their heads that the American colonies did not exhibit the growth of freedom but the development of capitalism and racism.

Most honest historians will tell you that 18- and 19-year-olds, when they can, have voted with their feet in avoiding this course, which is defectively connected to the history of the United States. Specialists have failed to promote their Atlantic world agenda, and to make well-off young persons feel ashamed of their heritage of racial privilege. This academic disregard for the nationalizing politics of the United States, I believe, has spawned the enormous number of patriotic popular biographies of the Founding Fathers. If non-academics cannot learn the historical rudiments of American citizenship at university, they will get the basics somewhere else. In aiming to reorient freshpersons and sophomores to a professorial style of thinking, instructors have had the opposite effect from what they have anticipated. If you are accustomed to the ironies that arise in inquiry of the past, this phenomenon has the familiarity of an old friend.

Bailyn has a large responsibility for Atlantic history, but he framed matters in contrast to his epigoni who dominate lecture halls today. During his floruit, he allowed us to have a broader conception of the Atlantic world for the United States. The dispersal of British and African populations set the stage, for Bailyn, for readers to gain the most inclusive insights about the Revolution and Constitution.

Bailyn's standpoint on the Atlantic past links up with his reflections on historical knowledge. History, "sometimes an art," most of all reminds him of a craft. He conceives that while study of the past never rises to the scientific, historians exert themselves to "get it right" as a form of story-telling, and strive for an impossible "objectivity." That well-worn word, the author says in various places, implies an impartial and synoptic view; Bailyn regularly intimates that a perfect historical analysis would resemble a wide angle camera moving above a gigantic geographical region over some vast period of time.

This ideal regulates the conduct of real, imperfect historians, who of course cannot take in everything that happens over a huge area and do not have an indefinite perceptual span. Real historians, Bailyn goes on, struggle toward the ideal by basing their narratives on as much evidence about the past as they can obtain. They write their histories to avoid "presentism," and they value "contextualism." Bailyn's intellectual heroes, that is, do their best to shun the biases of the contemporary world and put their information into proper perspective.

Historians inevitably grasp ideas about the past denied to the people living in it; researchers have some sense of how the story has turned out, and are inevitably burdened by knowledge that those written about did not have. At the same time, doctoral training lightens this burden. The best craftsmen go all out "to understand the past in its own terms." They strain to take in "the meaning of documents, the motivations of historical actors in their original historical settings," and they direct "their greatest suspicions and vigilance … at anachronism." The best historians undertake to recapture the ignorance of their protagonists about the future, to pretend to a certain unawareness.

Bailyn thus directs historians "to suspend their present commitments sufficiently to enter different worlds." At one place in the book he puts into play his substantial ability not to suffer fools gladly, and displays irritation at later generations of historians who have denounced the racist stances of the Founding Fathers. These historians have embraced the worst form of presentism; they have ignored, in Bailyn's view, the outlook of the late 18th century, and have showered men like Jefferson with condemnation from the late 20th and early 21st centuries. Here Bailyn is exasperated that historians nowadays aim at an easy target like the opinions of the Founders about Africans and African Americans. Fashionable practitioners make simplistic censorious appraisals derived from a modern sensibility, without regard to the social milieu that constrained public figures in the 1700s. Bailyn dislikes the comfortable self-righteousness and condescension of those who have given us the non-survey of US history to 1865.

To this sentiment I would just like to say Amen. But matters hold more difficulty than that, and they hold more difficulty for Bailyn. He recognizes a predicament with his "contextualism," and admits an unresolvable trouble in that the consequence "of succeeding in contextualizing history is essentially moral." We show sympathy for those "not only distant but alien." "To explain contextually is, implicitly at least, to excuse."

But Bailyn does not excuse, and his sympathy has limits. He writes of "latent and manifest events." The manifest ones consciously shape the behavior of past individuals. The latent ones differ; they operate invisibly in the past itself, although current historians can see them functioning. Bailyn urges that the scholar integrate the manifest and latent. We want, for example, to comprehend the intentions of the early modern slaver, but also to incorporate this comprehension into our up-to-date apprehension of mercantile commerce, demographic change, the cultural patterns pertinent to slavery, and the psychological dynamics of oppression. Indeed, we don't want unequivocally to throw out the knowledge we have that historical subjects did not have. That is, we indulge in a form of presentism, and go beyond contextualism.

Although reproving individuals who belittle the Fathers, Bailyn nonetheless argues that we can approach slavery "objectively and impersonally, but only up to a point." We are inevitably ethically and non-rationally involved. In a problematic discussion of the slave trade, Bailyn contends that the historian cannot escape feelings about slavery that tend to the "immediately urgent [and] emotional, unconstrained by the critical apparatus of scholarship." Slavery "tears at our conscience and shocks our sense of decency."

Bailyn's distress shows the limits of his complaints about the way his former apprentices moralize over slavery. Moreover, my related complaints about the deficiencies of the new survey course do not entirely persuade even me: racist greed was endemic and growingly institutionalized. But non-emeritus teachers need still to reflect on their own abstract condemnation of the white leaders who settled the United States, and the crab-like skitter in the progress of historical interpretation.

Bruce Kuklick is Nichols Professor of American History, Emeritus, at the University of Pennsylvania.