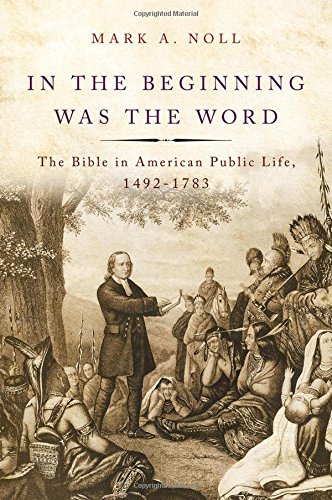 Mark Noll on the Bible in public life.

The first thing I do every morning, even before brewing the coffee, is to retrieve the New York Times and the Indianapolis Star from our front sidewalk. Whereas the front page of the Times comes emblazoned with a secular slogan, "All the News That's Fit to Print," the Star's front page carries a motto from 2 Corinthians 3:17: "Where the Spirit of the Lord is, there is liberty." Does the Star's biblical quotation signal a more conservative editorial stance? Perhaps, though as Mark Noll shows in his monumental new book, In the Beginning Was the Word, Americans have long appealed to the Bible as a kind of repository of republicanism (small "r"), a commonsense charter of liberties against the threat of aristocratic tyranny. The colonial minister Elisha Williams, for example, in his famous pamphlet The Essential Rights and Liberties of Protestants (1744), appealed to 2 Corinthians 3:17 as one of a number of "freedom" texts from the New Testament he regarded as support for his Lockean argument of unalienable rights and limited government.

In Noll's view, Williams exemplified Americans' persistent tendency to assume the Bible was on their side, despite the Scriptures' vastly different cultural origins. Williams' starting point was his own politics: he reasoned from Lockean principles to the Bible, not the other way around. His pamphlet foreshadowed what Noll calls the "Whig-biblical confluence" during the American Revolution, when clergy of many stripes, along with secular pamphleteer Tom Paine, appealed to Scripture to justify the Patriot cause. Ironically, the same Bible had been used earlier in the colonial era not to attack the British monarchy but to defend it as a bulwark against Catholic (especially French) tyranny.

The story told by Noll brims with such ironies and complexities. The first installment of a projected two-volume history of the Bible in American public life, In the Beginning ...