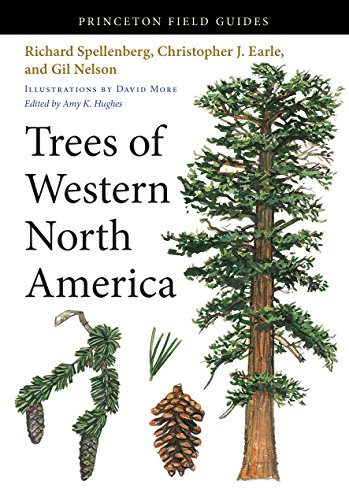 A splendid field guide to trees, best used at your desk.
November/December 2015

It began with a booklet my father brought home from his office one day: Trees to Know in Oregon. I carried it around with me to see what I could identify in our backyard, starting with the Douglas fir and moving on to white oak, bigleaf maple, and Port Orford cedar—the latter, I found, planted just a hundred miles outside its natural range. The backside of the Port Orford leaf sprays sported a column of white X's, unlike the sprays of western red cedar in the Cascades, which looked like stacks of butterflies, and also unlike the sprays of incense cedar, in the warmer, southern part of the state, which appeared as a series of inset goblets.

So, I was off, learning the names and shapes of things—of these trees that, more than anything, defined the Pacific Northwest. Shy as I was, I felt that I was making friends. Later I would learn that the poet Rilke had said, "Through naming comes knowing," and I thought that I understood what he meant. My knowing has never been of a highly scientific kind—in college I would labor to learn the photosynthetic Krebs Cycle, only to have it pedal through one ear and cycle lamely out the other—and I often go through spells of forgetting, and have to be re-introduced to former acquaintances. But a lifelong satisfaction remains of sometimes knowing the names of trees and recalling, even, a few of their quirks and characteristics.

I have graduated over the years to more substantial field guides to the flora and fauna of various regions: the Santa Monica Mountains, the Sierra Nevada, the Siskiyous, the Olympic Peninsula. Some of these guides have talked over my head, some have confused me with out-of-focus photographs, and some have left out more than they might have included. So when John Wilson, in his infinite kindness, sent me a copy of Trees of Western North America, the latest in the series of Princeton Field Guides, I knew I would want to explore its merits. The first thing to know about this book, however, is that the term field guide is a bit of a misnomer. Though reasonably compact in size, it weighs in on my highly accurate bathroom scale at exactly two pounds. So field reference is more like it. This book is more likely to remain on my desk than to find its way into my rucksack.

Given this one drawback, however, Trees of Western North America is a splendid book, comprehensive in a way that readily answers the questions I bring home from the field. On a recent autumn visit to the North Cascades, for example, knowing I had seen some sort of mountain ash on the trail, I was only sure of the exact kind upon looking it up in the Princeton guide back in my cabin—a Sitka mountain ash, with its flaming orange leaves and crimson berries, one of thirty-one ash species listed in the volume. In this identification I was aided by the excellent illustrations of David More, crisp and vivid in a way that brings out the peculiarities of each plant feature. (I am reminded, too, of a note that the pioneering Northwest botanist David Douglas often made to himself in his journals: "Must learn to draw.") Also, of course, thumbnail maps of species distribution helped me to narrow down the candidates.

The entry for the California bay tree, a specimen that shades the streamsides near my home, can serve as an example of the helpful habits of this guide. First comes the common name, then the scientific (Umbellularia californica), and then a handy list of other common names under the heading A.K.A.: Oregon myrtle, California laurel, pepperwood, headache tree. And then a one-sentence Quick ID: "Smooth, lanceolate, entire evergreen leaves with a pungent spicy odor distinguish this tree." If I have forgotten what lanceolate means, I have only to turn to a visual key of leaf types at the beginning of the volume—or, if I am more verbally inclined, to the glossary in the back. Then follows a more detailed description of size and shape, followed by yet more precise information under headings such as Bark, Twig, Leaf, Flower, Fruit, Habitat/Range, and, most helpfully for a very amateur botanist like me, Similar Species, wherein I learn that California bay is a little but not exactly like giant golden chinquapin, tanbark oak, and bay laurel, the real source of the spice bay leaf, which is only "an occasional waif in Calif." Waif? I'm back to the glossary again, thinking of Little Orphan Annie but finding that in the world of botany a waif is "a stray"—that is, "a plant that has been introduced and is occasionally found growing naturally, but has not become naturalized or established self-perpetuating populations." On the opposite page are exquisite color drawings of an entire tree, a leaf spray, the fruit (in this case, a drupe, which sounds something like a Shakespearean insult), and the bark pattern. For good measure, four such drawings are also included of that wandering waif, the bay laurel.

Thus far the technical stuff, helpfully presented. But the last category of advice, just before the map of distribution, is the miscellaneous Notes. Here I learn that "this unique species is distinguished from all others in the region by its odor, permeating the air with the scent of bay, but stronger, with overtones of camphor and pepper." Hence the name pepperwood, I think. "It is at first pleasant, but in confined spaces can be obnoxious." And hence, headache tree! But wait. The leaves have been "used medicinally to treat many ailments, including headaches; ironically, their odor also produces a headache in many people." Well, okay, an ancient form of homeopathy—but it gives me a headache just trying to figure it out. I am on simpler ground when I learn that the leaves have also "been used to repel fleas in beds." (Where were the bay leaves when Shakespeare's ostlers and carriers needed them at the Rochester Inn?) I learn, too, that the California bay is the only species of the laurel family west of the Rockies, "a remnant of ancient times when other Lauraceae were also present"; that the trees can live up to 300 years; that the trunks can grow up to a meter in diameter (yes, the entire book is metric); that the wood is valued for interior cabinetry; and that "the flesh of the fruit is edible," though "palatable only for a brief period immediately after maturation."

What the notes don't tell you is that the flexible sprays of bay leaves can still be shaped into a passable laurel crown. My wife and I made one of these recently for the installation of our city poet laureate. Easy to do, and it looked terrific against her beautiful blonde hair. But the photographers and reporters and city council members kept asking her, "Are those really laurel leaves?"

"Beats me," she said, "but Willis made it, so it's probably the real thing."

Use your nose, I wanted to say. And maybe you'll get a headache.

Paul Willis is professor of English at Westmont College. He recently served as an artist-in-residence in North Cascades National Park in Washington State.