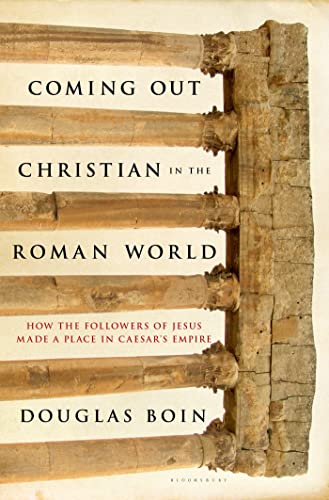 Coming Out Christian in the Roman World: How the Followers of Jesus Made a Place in Caesar’s Empire
Douglas Boin
Bloomsbury Press, 2015
224 pp., 28.00

The title of Douglas Boin's Coming Out Christian in the Roman World: How the Followers of Jesus Made a Place in Caesar's Empire is the print-medium equivalent of "clickbait." It arrests your frantic attention and makes you feel that, if you follow through to the content, your momentary focus will be rewarded. You simply must know: is this a book about gay Christians in the early church, or is "coming out" merely a metaphor for Christian conversion? Will reading this book miraculously endow you with wisdom to navigate the culture wars?

Short answer: the "coming out" of the title is a metaphor, and, while many readers of varying theological perspectives might hope that an analogy between early Christians and today's LGBTQ people could heal some rifts, here it's mostly used for window-dressing rather than substantial analysis. For example, take Boin's treatment of Constantine. After quoting Eusebius's description of Constantine as a man who "prided himself" on his Christianity, Boin elaborates: "Constantine must have struck quite a pose. The same Greek verb, 'to pride oneself' (enabrunomai), had been used to describe men like Julius Caesar who made risky fashion choices, such as wearing loose-fitting clothes."

Constantine: out and flamboyant about his Christianity. But Christian identity in the era of the early church wasn't merely a matter of public proclamation: it was deliberately chosen and involved casting aside an old self. Many LGBTQ people would object to applying that description to gay identity, so there are some obvious flaws in the analogy. But, while Boin chooses as his epigraph a passage from John Lewis Gaddis about how "science, history, and art … all depend on metaphor," he doesn't actually depend consistently on his own chosen metaphor. Apart from the title, a few passages like the Constantine section, and the last words of the book—"What do I see now when I look back at four hundred years of Jesus' followers in Rome? I don't just see the red of the martyrs. I see a group waving a flag of many colors"—the metaphor isn't sustained. (For a more developed analogy between coming out and Christian conversion, see Norman W. Jones' Gay and Lesbian Historical Fiction: Sexual Mystery and Post-Secular Narrative.)

Boin's real point is buried in those last few sentences, though. Boin is an archaeologist, and one of the problems he's addressing is the lack of clear archaeological evidence for Christians in the 2nd and 3rd centuries. Then, too, he's heard enough about the martyrs. They're one-dimensional, single-minded, zealous—worst of all, judgmental. To correct for their overly vocal presence in the historical narrative, Boin wants to unearth examples of quiet, inoffensive Christians who easily reconciled their Christian and Roman identities.

The problem is that Boin doesn't have much to round out his discussion of these supposedly milder early Christians (he uses the dearth of evidence as proof of their mildness). Chronologically (though not first in their order of appearance in the book), the first of Boin's exemplary Christians are "Chloe's people and Stephanas's people," names that Boin seems to have picked out of 1 Corinthians without regard for context. After quoting Paul's condemnation in 1 Corinthians 8:10 of some of the Corinthians for eating food sacrificed to idols, Boin writes, "Reading this letter, one could think that the rules for what it meant to be Jesus' follower had always been crystal clear and that Paul was chastising the group for ignoring widely posted placards. Yet no such admonition against attending a Roman banquet had ever existed."

Really? How about the Council of Jerusalem's command to abstain from meat sacrificed to idols, at least two years before Paul wrote 1 Corinthians? Then, too, it's not as if Jews in the Roman Empire were unconcerned about idolatry. Boin has just, two pages earlier, mentioned that Paul "was a Jewish man who saw belief in Jesus' resurrection as an essential part of his Jewish identity." Surely it would have been relevant before this point to talk about how 1st-century Jews negotiated their Roman identities. (Boin does get around to that in the following chapter, but he creates the same distinctions—Maccabees bad, completely Hellenized Jews good—that he does for Christians.)

As with "Chloe's people and Stephanas's people," Boin finds his other quiet Christians in between the lines penned by zealous Christians. We know of Martial and Basilides, bishops in 3rd-century Spain, because Cyprian, bishop of Carthage from AD 249 to 258, wrote a letter condemning their participation in Roman festivals. The Christian historian Lactantius said of Prisca and Valeria, the Christian wife and daughter of the emperor Diocletian (AD 303-12), that "Diocletian compelled [them] … to be polluted with a sacrifice." Among Boin's reworkings of historical documents, his reinterpretation of Prisca and Valeria's story is surely one of the strangest. Contra Lactantius, Boin writes, "From everything we now know about Roman sacrifice, we can say that Prisca and Valeria weren't compelled to do anything. Each of them could have opted for martyrdom if she'd wanted to." Clearly, Boin has an unusual definition of either "compelled" or "martyrdom," or possibly of both. Sure, embracing a victim narrative isn't helpful for anyone—LGBTQ, Christian, or LGBTQ Christian—but there is such a thing as persecution, and the threat of death seems like a fairly strong criterion for determining when it's happening.

Few as these examples are, Boin clings to them as a preferable alternative to post-Constantinian Christians, who "are embarrassingly full of derogatory remarks about 'pagans.' " Boin claims, however, that the "word 'pagan,' as fourth century Christians used it, had nothing to do with non-Christians." Instead, it referred to fellow Christians lacking in zeal. In these decades, "Christians were being forced to 'come out' in public. Others were being mocked for being too civilian or acting too Greek."

So, if zeal is the problem, how does that work with Boin's floundering metaphor? When Boin says that 4th- and 5th-century Christians were being forced to "come out," is he implying that there's some contemporary parallel to a "one size fits all" version of LGBTQ identity that might dominate within the LGBTQ community as it gains legal legitimacy? I don't think that's Boin's point, but the analogy is so undeveloped that it's hard to tell. Analogies can be powerful tools for changed understanding, for seeing oneself and others in new ways. But they can also be insensitive: comparing different forms of suffering is seldom a good idea. Coming Out Christian does at least avoid that.

Ultimately, though, Boin's analogy seems to be mostly a gimmick—a gimmick that, in its lack of development, could have been a Buzzfeed article. I would have clicked on it and then promptly forgotten it.

Carissa Turner Smith is associate professor of English at Charleston Southern University and writes about African American literature, spiritual autobiography, and young adult literature. She's currently working on a book project on saints and relics in children's and YA literature.