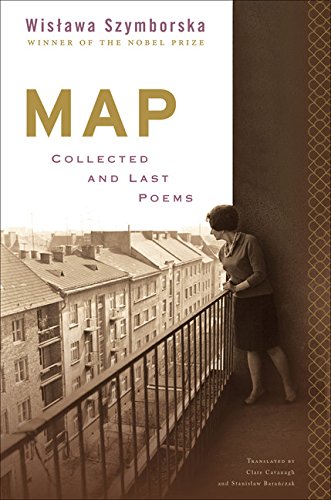 In addition to his History of Polish Literature (1969, 1983) Milosz produced an anthology, Postwar Polish Poetry (1965, 1970, 1983), which introduced this body of work to American readers. The first edition of this anthology included a single poem by Szymborska; eight of her poems were featured in the third edition. The first substantial translation, Stanisław Barańczak and Cavanagh's View With a Grain of Sand, didn't appear until 1995. But after she won the Nobel in the following year, many more of Szymborska's books appeared in English, including side-by-side English and Polish in Monologue of a Dog, and Here, her last two English collections prior to Map. In those volumes, those of us who read English but not Polish are free to contemplate the original as a mysterious thicket of consonants and vowels, and those few who read both are free to compare the originals with Baranczak and Cavanagh's renderings of them.

I say all this about Szymborska's publication history because I don't want to take access to her works for granted. Poems don't just magically travel from a writer in one lonely room to a reader in another. Szymborska used her 1996 Nobel address to portray the act of writing as ordinary and solitary, rather than heroic:

[Poets'] work is hopelessly unphotogenic. Someone sits at a table or lies on a sofa while staring motionless at a wall or ceiling. Once in a while this person writes down seven lines, only to cross out one of them fifteen minutes later, and then another hour passes, during which nothing happens … . Who could stand to watch this kind of thing?

The unphotogenic life is an important theme in Szymborska's work. In Calling Out to Yeti, published in 1957, she invites a response in the poem "Classifieds":

WANTED: someone to mourn
the elderly who die
alone in old folks' homes.

At about the same time, Allen Ginsberg was giving readings of "Howl": "I saw the best minds of my generation destroyed by madness, starving hysterical naked." Szymborska does not lionize people like Ginsberg's "angelheaded hipsters," brilliant individuals beaten down by an oppressive society. Throughout the decades of work collected in Map, she praises individuals, very much so, but lavishes her particular praise and attention on people who are not special or noteworthy.

In the beautifully simple "Cat in an Empty Apartment," an ordinary, unnamed person is mourned by an ordinary housecat which, like most cats, feels a mixture of love and entitled resentment. "Die—you can't do that to a cat," the poem begins. In deliberately generic language, the poem captures the disruption of routine that accompanies a bereavement:

The cat's frustration and malaise grow as the poem goes on, until the final stanza:

Just wait till he turns up,
just let him show his face.
Will he ever get a lesson
on what not to do to a cat.
Sidle toward him
as if unwilling
and ever so slow
on visibly offended paws,
and no leaps or squeals at least to start.

Szymborska is quite willing to take on an easily sentimentalized subject—the relationship between pet and owner, for instance—and address it in dry, direct speech. She deploys a flat affect and an undercurrent of darkness to avoid veering into sentimental territory, keeping alive a sense that hidden feeling deserves more attention than bombastic proclamations. She also skewers sentimental feeling itself, in poems like "Hitler's First Photograph," which takes on the voice of a doting adult cooing over a baby's portrait, except it's not just any baby.

Whose teensy hand is this, whose little ear and eye and nose?
Whose tummy full of milk, we just don't know;
printer's, doctor's, merchant's, priest's?
Where will those tootsy-wootsies finally wander?

The poem at once exposes the lengths to which we use babies and other sentimentalized figures to smooth over the darkness in the world, and exposes the vast ignorance of the ordinary human being. Her reluctance to participate in such evasions led to her poem "Photograph from September 11" being rejected from an art installation, because it was too dark.

As for the relationship of the individual to the collective, she's highly suspicious, quick to stand aside from collective enthusiasm, whether it's for something benign or sinister. "Don't take jesters into outer space / that's my advice," she writes in "Warning":

The cosmos is what it is—
namely, perfect.
Your jesters will never forgive it.

She deflates the easy rhetoric that often accompanies scientific discovery while also exposing our smallness in the midst of a grand universe. No matter how broad-minded, we're all jesters in space.

When it comes to the totalitarian state, which she lived in and published under until the fall of Communism, she doesn't rage against the machine but rather subverts it by poking fun at self-important bureaucracy. Not taking the prophetic posture of the dissident writer, she avoided jail, defection, and, for the most part, censorship. But her poem "An Opinion on the Question of Pornography," published in the 1986 collection Ludzie na moście (People on the Bridge), slyly mocks censorship, setting up a metaphor where dissidents are compared, in the voice of a pompous bureaucrat, to pornographers:

There's nothing more debauched than thinking.
This sort of wantonness runs wild like a wind-borne weed
on a plot laid out for daisies.

Nothing's sacred for those who think.
Calling things brazenly by name,
risqué analyses, salacious syntheses,
frenzied, rakish chases after the bare facts,
the filthy fingerings of touchy subjects,
discussion in heat—it's music to their ears.

Over and over, Szymborska's poems, with their sly, dark wit, champion all that we are likely to overlook in our hurry to plead our cause, to argue for this or that change to come to the world. She approaches human failings in ways that acknowledge evil forthrightly, but also with deep compassion. You get the sense that she'd bypass an eloquent speech from a noted dignitary in favor of listening to someone give a rambling, repetitive account of a vacation they took, complete with unexceptional tourist photographs. She'd deflate the pompous windbag with one well-aimed barb, but she'd let the batty vacationer ramble on with a halfhearted shrug. Life's banalities deserve our attention, she seems to say, because we share them. Our exultant joys and profound sorrows happen amid the detritus of the ordinary. Hence, I think, her effort to use her Nobel acceptance speech to place poets in the category of banal rather than prophetic. To one would-be poet, she wrote, in her newspaper column, "Let's take the wings off and try writing on foot, shall we?"

A few of the blurbs that have appeared on previous English-language collections have praised her for being "accessible" and "readable." This is something like saying a wine is "drinkable"—faint praise that in the end doesn't say much. Still, if you are a person easily intimidated by poetry or wine, these epithets may give you some consolation.

The surface of Szymborska's poems is clear, undoubtedly aided by Cavanagh and Barańczak's excellent translations. Reading them, I never think, as I sometimes do with translations, "That's weird—it must sound much better in Polish." Of course, the risk of a clear surface is that it's easy to see the shallows. Some of Szymborska's simpler poems are more like a quip or an offhand, witty remark than a deep meditation. But there are dozens in Map that I've returned to many, many times, poems that offer riches upon riches, treasure troves hidden in the crevices of ordinary life.

Hannah Faith Notess is managing editor of Seattle Pacific University's Response magazine and editor of Jesus Girls: True Tales of Growing Up Female and Evangelical. Her first full-length collection of poems, The Multitude, is forthcoming from Southern Indiana Review Press in 2015.