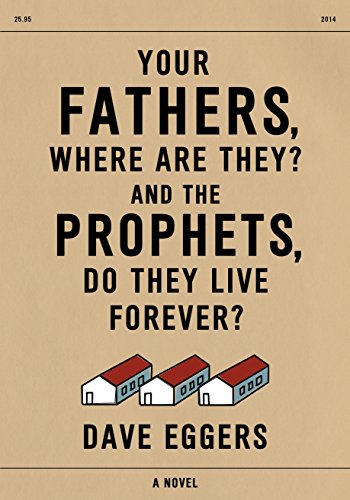 A novel that points toward repentance.
October 2014

At its most philosophic, Your Fathers is Eggers's dramatization of Gilles Deleuze's Anti-Oedipus: Capitalism and Schizophrenia, where Thomas is the schizophrenic who, because he lives outside the confines of the economic "herd," sees clearly the immediate danger that everyone lives within. He savors a cruel, liberating irony—that he did not kidnap his friends but freed them from their prison. When the officers arrive to take Thomas away, the kidnapped yell, "We're in here and we're safe." And Thomas can't help himself. "God," he says, "that sounds really horrible, doesn't it. Nothing in the world sounds worse than that, to be here and safe. Say it again. I don't think they heard you."

But the title points us to a different theme—a different question, a far more fruitful one. One of the kidnapped, a police officer, describes to Thomas an incident where an apparently unstable young man walked around his neighborhood with a steak knife, shouting apocalyptic things. This police officer and a ten-man SWAT team would later confront the young man in his backyard. The young man was heard "saying he was immortal, that he would cut our eyes out. That kind of thing … . He called us shades … . He also said he wrote the Bible. He quoted some line … Something about missing fathers." Which leads us to Zechariah 1:5-6):

Your fathers, where are they? And the prophets, do they live forever? But did not My words and My statutes, which I commanded My servants the prophets, overtake your fathers? Then they repented and said, 'As the Lord of hosts purposed to do to us in accordance with our ways and our deeds, so He has dealt with us.'

Now, what do the prophets have to do with contemporary life or literature or criticism or culture? The glory of poetic literature is to reawaken us to the gift of existence. It reminds the reader to be thankful. Nihilistic literature reverses the thankful into the moribund, life revealed as a dreadful cage. Drunk on the spirit of poetry, the reader's thoughts turn into doxologies. Under the hood of nihilism, the reader walks aimless and sullen. But the prophet does not evoke thankfulness or despair. The prophet is not trying to give his listeners an existential education. The prophet turns his audience to repentance.

Between poetry and meaninglessness, peace and war, is there any space in literature for poetic insight mingled with woeful petition? We can think of novels that have made us thankful for existence and others that depressed or unsettled us. When has a recent novel made its readership repentant? Thomas could not do it. He could only attain the zeal of a harbinger, who shouts that doom is at hand; but doom is always at hand. Thomas could not speak as the prophets do, revealing to us the the arms of forgiveness spreading.

It might be small; it doesn't take much to say it. But it's not an insignificant contribution to literature, this. Eggers' book shows by example a world where the prophets do not live forever, where literature has lost that middle response—repentance—between uplifting beauty and abysmal despair, amid novels (his own included) that do not or cannot expand on the human cry, "Have mercy on us."

Charles Carman is a staff writer at The Curator magazine. He married a poet from Minnesota. They regularly host meals with friends where they talk theology and literature over wine and homemade rosemary bread.