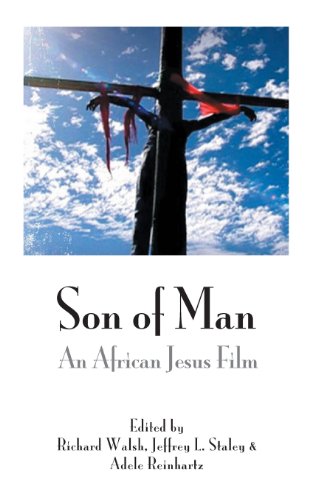 Son of Man: An African Jesus Film (Bible in the Modern World)

Reimagined as a political activist.
September/October 2014

The story of Jesus has become so familiar to us that we sometimes fail to grasp just how shocking, disturbing, or ultimately motivating it really is. Even films designed to take us back to 1st-century Judea tend to come across as soothing or reassuring, which hardly matches how the apostles would have experienced those events. Sometimes it takes a radical reimagining to get us to really think about the implications of that story, and how it might be applied to our present-day reality. And one of the most interesting such reimaginings—certainly in recent years—is Son of Man, a South African production that depicts Jesus as a political activist working in a war-torn modern African country.

Like most independent foreign films, Son of Man has kept a relatively low profile—it didn't even come out on DVD on this continent until four years after it premiered at the Sundance festival in 2006—but it can now be streamed on Netflix in the U.S., and it has attracted a fair bit of attention in some circles. The conversation surrounding the film is now further illuminated by Son of Man: An African Jesus Film, a collection of 16 essays that look at the film within the contexts of African culture and the Jesus-film tradition as a whole.

Edited by Richard Walsh, Jeffrey L. Staley, and Adele Reinhartz, all of whom have written on Bible films in the past, the book illuminates such details as the way the film mixes the biblical baptism and temptation of Jesus with Xhosa circumcision rituals, or the way the Jesus of this film is much more interested in political activism than theology, or the way the film makes Mary a far more prominent figure than she is in other Jesus films, because it is she who compels her son to bear witness to the atrocities around them when he is still a boy, and it is she, rather than any of the disciples, who plays the primary role in shaping his community after he dies, by leading his followers in a song of protest.

Interestingly, in fusing the biblical narrative and the African setting, the film sometimes ends up straying from the realities of both. This is perhaps most evident in the film's treatment of the crucifixion and resurrection of Jesus. In the film, Jesus is not executed in public but killed privately by the authorities, and it is his mother who exhumes his body and hangs it from a cross to expose what the authorities have done. The "crucifixion" thus becomes a kind of "resurrection," since it is the display of his body that motivates his mother and his followers to continue as a community that confronts the authorities. But if this sequence takes liberties with the Bible, it also takes liberties with African social norms; as Jeremy Punt notes in his essay, the mother's action here "opposes the African custom of honouring the dead."

Perhaps the most interesting essays in this book are those that surprise the most. I was not expecting to see, for example, an essay by Staley comparing and contrasting Son of Man with the 1973 hippie musical Godspell, but the points of contact between the two films are fascinating, once you notice them. Among other things, both films make significant use of songs, and they both feature disciples of both genders, a Jesus whose face is painted at least some of the time, and red ribbons symbolizing blood when Jesus is "crucified." On the other hand, where Godspell emphasizes the parables but leaves out the miracles, Son of Man depicts the miracles but leaves out the parables; and where Godspell imagines that one can react to the problems of this life by retreating into a world of childlike play, Son of Man is all about confronting the powers of this world and working toward social change.

Similarly, the very first essay in the book—by Gerald West, a biblical hermeneutics teacher at the University of KwaZulu-Natal—summarizes the reactions of West's students to a screening of Son of Man. Unlike many North Americans, who have immediately praised the film for its social relevance, West reports that his students wondered at times if the film was contributing to an "Afro-pessimist" caricature of their continent, not least by the way it mixes South African political concerns with images of violence taken from the conflicts in Rwanda and other countries. West also notes how the film allows the biblical narrative to trump African political realities at times: for example, the terrorists in the film kill the children they find, just like Herod's soldiers in the Bible, but in reality they would have drafted the boys into their armies as child-soldiers. Similarly, the story of the adulteress who was about to be stoned to death is here turned into a story about an adulteress who is about to be "necklaced," i.e., burned to death with a gasoline-filled tire placed around her neck—but in the real world, "necklacing" was reserved for those accused of political collaboration.

I was also intrigued by an essay by Darren J. N. Middleton and S. Brent Plate that looks at Son of Man in the context of other films that have deviated from the standard filmic interpretation of Jesus, in which he is seemingly always played by someone of European descent.[1] Among other things, the authors cover films like Jesus, the Spirit of God and Karunamayudu—which were made in Iran and India, respectively, and which naturally reflect the beliefs and stylistic norms of the cultures in which they were made—as well as The Color of the Cross, an American film that supposes the historical Jesus was black.

The book is not as accessible as it could have been. Several of the essays trade in the sort of impenetrable academic jargon that could be off-putting to readers who are otherwise interested in learning more about this film, and a few make gratuitously strident claims that perpetuate stereotypes of their own, as when George Aichele begins his otherwise interesting essay on the relationship between the transmission and betrayal of tradition (transmission and betrayal having the same root in Greek) by asserting that Son of Man will be offensive to "bigoted, capitalistic, nationalistic, arrogant, or otherwise narrow-minded Christians, which are in abundant supply here in the United States, at least."

Other essays assume a position of analyzing the film in relation to American politics, which seems strangely provincial, given that the film—directed by a British-born South African—is at least as concerned with European colonialism as it is with any other foreign power. Some readers might also object to the casual use of phrases such as one in the introductory essay that lumps "the Gospel" in with "other forms of Western imperialism."

I was also surprised to find that there was virtually no discussion of Dornford-May's previous film, U-Carmen eKhayelitsha, which won the Golden Bear when it premiered at the Berlin International Film Festival in 2005. Like Son of Man, which sets the story of Jesus in a South African township, so too U-Carmen was an adaptation of the Bizet opera Carmen that was set in a South African township. Both films also starred Dornford-May's wife, Pauline Malefane (as Carmen and Mary), and were produced with a group of stage actors, currently known as the Isago Ensemble, who specialize in recontextualizing "Western" stories.

Last fall, shortly after the publication of Son of Man: An African Jesus, Dornford-May finished a third film that was both biblical and operatic: Unogumbe, based on Benjamin Britten's Noye's Fludde. In Dornford-May's film, it is Malefane as Mrs. Noah who builds the Ark, and it is her husband who spends all his time drinking—a gender switch that was prompted, according to the Ensemble's music director, by the fact that many South African children are raised by single mothers and the "men don't pull their weight."[2] Interestingly, Britten's opera was based on the Chester Mystery Plays and, as Son of Man: An African Jesus makes clear, there are elements in Dornford-May's Jesus film that borrow from those plays too.

Unogumbe was not yet available when this book was written, but U-Carmen certainly was—so, as valuable as it is to look at Son of Man as a product of South African culture and as a contribution to the Jesus-movie genre, it might have been profitable if at least one essay had looked at the film specifically through an auteurist lens, or through the lens of the ongoing recontextualization of "Western" stories that Dornford-May and his ensemble are engaged in.

In any case, Son of Man is one of the most bracing Jesus films to come down the pike in a long time, and it is worth a look, whatever one's theology or politics. And whatever flaws the book might have, Son of Man: An African Jesus Film does offer some excellent insights into the movie's cultural reference points and its connections to the Jesus-movie genre that might not be apparent to the casual viewer. On that level, it's an essential companion to the film.

Peter T. Chattaway is a freelance film critic and blogger at Patheos.com with a special interest in Bible movies. He lives with his family in Surrey, B.C.

1. I am reminded of how the promotional materials for the Jesus film (1979) made much of the fact that most of the film's actors were from Israel or other Middle Eastern territories—but the actor playing Jesus himself was an Englishman.