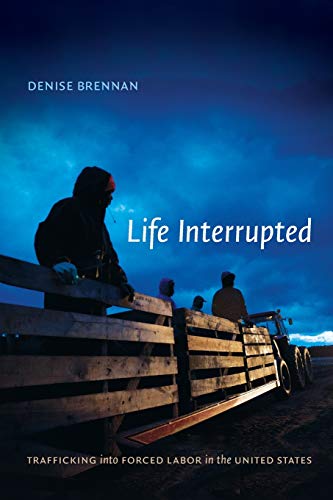 For many, including myself, "trafficking" is synonymous with sexual exploitation and modern-day slavery. Denise Brennan, writing specifically about trafficking into forced labor (which thrives in the garment and agriculture industries in America), is striving to change that perception. Her book Life Interrupted: Trafficking into Forced Labor in the United States details the mounting reasons why individuals find themselves in situations where they are forced to work with little to no pay, in dismal conditions, without knowledge of their rights. As I ticked through the usual feelings that come when faced with horror in my own proverbial backyard—surprise, righteous anger, slow-ebbing guilt—I wondered why this was perhaps the first time I had thought long and hard about labor trafficking in the United States. Brennan herself would categorize my ignorance as a byproduct of a larger trend in public consumption: "women working in brothels fit the public imagery of trafficked victims—men picking fruits and vegetables simply [do] not spur the same call-to-arms."

Brennan, an anthropologist who writes about trafficking, immigration reform, and women's law, understands the cultural cachet that certain narratives enjoy. Life Interrupted was written to pick up "where the sensationalist accounts leave off." Indeed, Brennan seems determined to write the book that no one else would care to; instead of focusing on the hellish conditions surrounding a person's journey into trafficked labor, Brennan focuses on the mundane challenges that victims face after they have walked away from their abusers. She tells stories about "building a life" after life has dealt a very cruel hand, and she's intent on introducing the reader to "real people, not mythologized versions of 'trafficked people.' "

The very real people portrayed in Life Interrupted do shine brightly; their stories make it personal for us, the readers. We're reminded that these individuals are certainly not forgotten in the eyes of God, as much as we might long to stay unaware of them. In the course of compiling the interviews, Brennan strategically allowed the individuals to talk about whatever was interesting to them. As a researcher working with trafficking victims, she is all too aware of the danger of re-traumatizing people—and the slippery allure of turning people into lurid tropes. In the vein of authors such as Robert Coles and James Agee, Brennan stresses over and over again that there is no one narrative that encapsulates the complex circumstances that enable a person to be forced into slave labor in the U.S., and that there is no one way to categorize these precious, beautiful women and men, made in God's own image, who undergird the most hidden parts of our economy. In that sense she is writing as an artist, not a researcher; from a theological position, not an academic one.

While the bulk of the book focuses on the individuals and their personal stories of success and failure at making a life in the United States post-trafficking, Brennan does set the tone with a lengthy introduction. Her other purpose in the book, besides filling out whatever stereotypes of "trafficking" we might have in our mind, is to call attention to the relationship between anti-immigrant policies and the pervasive exploitation of migrant workers in the United States. Indeed, she writes that "widespread migrant labor abuse—including trafficking—is the result of a robust demand for low-wage workers, the absence of federal immigration reform, ineffective labor laws, and migrants' fear of detection, detention, and deportation."

The stories of the (mostly) women that make up the majority of the book are compelling, worth reading on their own merit. But they are not the stories we are trained to want; they are not simple, easy; they do not talk about the abusers, they do not give us anyone to demonize. The individuals Brennan interviews, focusing mostly on their current struggles and future hopes, are simply people trying to survive in America. Many of them are isolated, without family and friends for support. They are alone. And most of all, they are poor.

I work on one of the many front lines of poverty in America—specifically, with non- and pre-literate refugees in a large midwestern city. I am familiar with many of the struggles recounted in Life Interrupted, the grinding effort to create a life out of nothing—years of no pay, years of psychological abuse, the anxiety of waiting to discover if you will be granted a visa to work and live in the U.S. As Brennan writes,

I found myself nodding along as I read these accounts of life-making and repair work; I know many people who struggle to find decent wages, healthcare, and a community to support them. But I also found myself somewhat dismayed at the focus. How was I supposed to care about these "victims" if they only told me about their present?

Life Interrupted gives me relatively little of the horror, the inhumanity, what Robert Coles refers to as "the brutality that civilized people somehow manage to allow in their midst." Brennan alludes to it, here and there—talking to a grower in North Carolina, for instance, who said: "the North won the War on paper but we confederates actually won because we kept our slaves. First we had sharecroppers, then tenant farmers, and now we have Mexicans." But for the most part, she prefers to give the reader the autonomy and obligation to understand the situation better than many of us do, refusing to lay it out neatly. In the end, she prefers the people who have lived through trafficking in the U.S. to come out on the other side and speak to us simply as the neighbors they are.

Therein lies the problem: I have been conditioned to crave the lurid, evocative stories. The raids on brothels, the drug mules. I prefer to focus on extreme situations which evoke horror and surprise, sins that seem to shimmer with exotic contrast to my everyday life. To honestly confront these surprisingly mundane stories of "formerly trafficked people" (a label which, in its exquisitely well-meaning sensitivity, can itself easily help me to distance myself from the individuals it names), I must look closely at myself and my daily habits: ignoring the friendless, not being in relationship with anyone who is barely making ends meet, always trusting someone else will provide. I live in a culture where there are endless evangelical abolitionist organizations, freedom fighters, one more fundraiser t-shirt to buy; you can even get an academic degree in rescuing people out of sexual exploitation. But I don't know any formerly trafficked persons on an individual level, although I have benefited from the systems that make up their broken realities.

A clear-eyed portrayal of how we like to talk about poverty and injustice will always sting a little. As Brennan notes about the leading "anti-trafficking" organizations (often focused exclusively on sex workers), "Basic, pragmatic concerns are neglected while other dimensions of … 'victimhood' are emphasized in the media or in programs offered by moralistic charities." She cites car ownership as one example—many formerly trafficked persons (and indeed, many people in poverty in America) "frequently mention the need for financial aid to attend driving school, as well as resources to purchase a car and insurance." Brennan goes on to describe what I know to be true of my own neighborhood, which is that there are "no fundraising campaigns, media accounts, or government programs designed to help formerly trafficked persons drive." For Brennan, the gap between the numerous anti-sex trafficking organizations and the needs of the mostly invisible men and women who have come out of trafficking in the U.S. stems from an unwillingness to address the fundamental issue involved: poverty.

This isn't the book I wanted to read. I wasn't prepared to struggle through the issues surrounding immigration reform and the current state of trafficked labor in the U.S., nor was I prepared to invest emotionally in the complex men and women who have been victimized by it. I was unwilling to see my own role as a consumer with insatiable appetites for the affordable, or how easy it would be for me to meet the real and tangible emotional and physical needs of my neighbors who live in poverty. I wasn't prepared to be driven toward books that would cause more soul-searching, chasing rabbit trails of documentaries and statistics, hungry to know what the truth was. In short, I wasn't prepared to do the hard work of confronting these stories of suffering that are all around us. All I ever wanted was to be aware.

D. L. Mayfield and her family serve with InnerCHANGE, a Christian order among the poor. She has written for McSweeney's, Christianity Today, Geez, The Curator, Conspire!, Christ and Pop Culture, and The Other Journal, among others. She blogs at dlmayfield.wordpress.com and tweets at @d_l_mayfield.