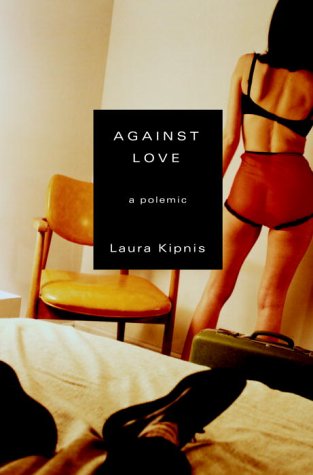 From I Do to You Can't

Marriage isn't as important as we're led to believe.
September/October 2004

I first caught sight of the book at City Lights in San Francisco, the legendary shop with an extensive stock of apocalyptic literature rivaling the most millenarian of Christian bookstores. Of course, the apocalypses under consideration there are not religious in nature. They address the more immediate threats of global capitalism, Bush's presidency, genetically modified food, environmental holocausts, and various other things that the French are always getting worked up about. In Laura Kipnis' case, the specter is love.

Actually, not love. Love itself gets no airtime in the book entitled Against Love: A Polemic. Infatuation appears, and it is good. So is thrilling sex (boring sex is bad). Marriage is somewhat beside the point as the legal sanction of the greater problem—domestic coupledom. Monogamy plus permanence plus common living quarters equals very bad news indeed.

"Love" as shorthand for all such nastiness, rails Kipnis, is the one unblasphemed idol of this American life, hence the need for a polemic. It's big business: the wedding industry, romantic comedies on large and small screens alike, couples therapy. It is also work. Good relationships take work, hard work, a lifetime of work. They also produce hard workers in other arenas of life: late hours at the office might mean more funds for the family, or they might mean avoidance of the same old spouse when too many anniversaries have passed. Either way, "love" is good for the economy—which, Kipnis suspects, is at the back of our cultural training in coupledom. After all, marriage has always been about the equitable exchange of property—durable goods and women, for the most part. Really, nothing much has changed. And since we all work in order to take vacations, why should monogamy (with a biannual holiday into adultery) be any different?

It's a small step here from economics to politics: love affairs are as revolutionary as the Boston Tea Party. "[I]f adultery is a de facto referendum on the sustainability of monogamy," Kipnis remarks, "this also makes it the nearest thing to a popular uprising against the regimes of contemporary coupledom." Adulterers are the new social rebels and heroes, Robin Hoods who steal sex from its stultifying confines in marriage (or parallel relationships) and toss it out to the deserving poor, i.e., the uncoupled in today's couple-conscious world. It so happens that they are fairly confused and inconsistent rebels—after all, they are escaping one set of love's demands only to enslave themselves to another. But there are an awful lot of them out there, according to everything from official statistics to personal anecdotes. Numbers demand attention. It turns out that life is pretty much like The Seven Year Itch, just without the happy ending (if that's what you call happy).

So really it's not love, or falling in love, or passion, or anything of the sort that's the problem. The only problem is the expectation that it will last. If by some chance it doesn't, we are trained to expect that it will be replaced by something more mature and less exciting, like stability. Why settle for less? Kipnis exempts those who have "good relationships," but only defined in the following terms: "having—and wanting to have—sex with your spouse or spouse-equivalent on something more than a quarterly basis"; "inhabiting an emotional realm in which monogamy isn't giving something up (your 'freedom,' in the vernacular) because such cost-benefit calculations just don't compute"; not enforcing faithfulness through "routine interrogations," "surveillance," and "impromptu search and seizure"; in short, "a state you don't have to work at maintaining." Clearly, such a state of non-affairs is assumed to be very rare.

Vastly more common, in Kipnis' telling, is the domestic gulag. This is monogamy-as-suffocating-prison rather than monogamy-as-soulful-devotion. It is self-sacrifice to maintain the status quo in state and society with a personal payoff of deadened sensitivities. (For the more creative, there is always the removal of some sensitive part of the spouse's anatomy.) It is a life defined by "you can't," the you-can't that endlessly issues from your significant other's lips, hemming in the edges of your life as the price for fidelity.

The author has conducted her own personal survey of popular you-can'ts in marriage. Her list occupies a stunning nine pages, beginning with "You can't leave the house without saying where you're going. You can't not say what time you'll return … ," progressing through, "You can't be impulsive, self-absorbed, or distracted," finishing up with, "You can't return the rent-a-car without throwing out the garbage because the mate thinks it looks bad, even if you insist that cleaning the car is rolled into the rates," and concluding with the other end of the bargain: "This is love obtained." Because the only way this can work, the only way anyone would be mad enough to buy into the system, is through the internalized conviction that there is nothing worse than being uncoupled. It is humiliating to be without a partner; it is crushing to be dumped. All else must give way to the foundational project of continuing the relationship at whatever cost. It's good for psychologists and the publishers of self-help books; good for the economy; good for the government. Fascism with full consent is the best way to rule.

The polemic draws to a close with consideration of the most famous adultery of recent memory, that of President Clinton with a certain White House intern. In public consciousness, Kipnis argues, Hillary Rodham Clinton was not the only, or even the primary, offended party. It is as if Clinton was the bridegroom and America herself the bride, demanding faithfulness as the first qualification to serve as chief executive. The masses were far more frenzied over Monica than Serbia, and soon one politician after another fell, regardless of anything to do with taxes or education, as jumbles of skeletons tumbled out of the closet. Kipnis surmises that the nation's dissatisfaction with the state of marriage was projected outward and public servants were made to pay for boredom in the bedroom.

But back to love. The first half of the book's title is a bit wide of the mark; permanent monogamy is Kipnis' bugaboo, but that hardly makes for a catchy title. A Polemic, however, is right on the money. As her "Reader Advisory" explains, "polemics aren't measured; they don't tell 'both sides of the story.' " Happy coupledom is not part of the data up for analysis. Even with the genre in mind, though, a few points of contention are worth a bit of quibbling. For instance, Kipnis accepts without question the popular myth of romantic love's recent invention, somewhere about the High Middle Ages. She and other true believers (C.S. Lewis strangely among them) have surely missed Jacob's weeping for joy on discovering Rachel at the well, or Gregory of Nyssa's exhortation to celibacy in De Virginitate to avoid the wrenching grief that follows the death of a beloved spouse. A more nuanced discussion of humans' paradoxical relationship to work is in order, too: maybe there is a capitalist conspiracy out there, but one suspects it could hardly be so successful if people weren't so interested in keeping busy. (Even couch potatoes watch their soaps with the maniacal attention of stock analysts.) And anyway, if the problem is finally political, infidelity isn't going to fix the system. People in love are notoriously too distracted to go around changing the world.

There is plenty else critical to say but too obvious to bother with saying it. The better tactic is to concede that Kipnis is right. Monogamy is unstable; marriages fail; domesticity can stifle. Matrimony's value is blown out of all proportion in our society—not least of all in our church society. One thinks of the extraordinary anxiety with which churchgoing elders regard the young until the danger of premarital sex has passed (with all too little attention to the problem of extramarital sex thereafter). Pressure to marry is as strong in religious circles as it is in the latest chick flick, but the statistical survival of such marriages is no better. And yes, people work to avoid their families, eventually get bored, and act out in all sorts of inappropriate ways: any pastor will tell you that.

To counter this culture, churches might do better to encourage the unmarried to stay that way until they have a compelling reason to do otherwise. The single would be spared much embarrassment and time wasted in useless yearning. Maybe some disastrous pairings would even be avoided. As for the married, matrimonial sin is subtle and complex (anyone in doubt need only read an Iris Murdoch novel or two). Boredom in this creation is a sign of much more out of whack than simply a shaky relationship. Adultery is undoubtedly the least creative response. Surely the church can offer more than the usual mantras.

What Kipnis finally lacks is not substance for her study, nor validity for her diagnosis, nor panache for her case. The big void that runs from beginning to end of her book is the absence of any notion of the human good. She cannot propose what is truly good for human life, except for some vague ideas about sex and personal nonentanglement, both of which would fall under a deconstructing lens as quickly as the other idols she has demolished. She rightly rejects the notion that love is God. But what if God is love? If communion with the loving God is the highest good, then both marriage and adultery must fall from first place. The latter, we may safely assume, will fall quite a bit farther.