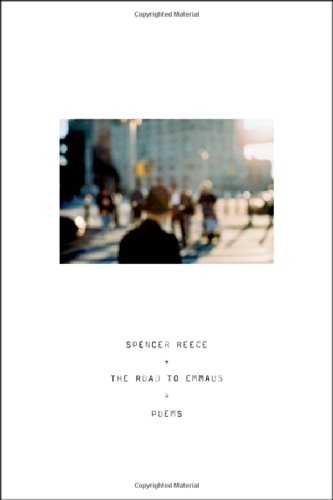 Although he is never harshly critical of seminary or the cloistered religious life, Reece does depict such a life as overly removed from the world and as artificial: "Inside everyone sat, knelt, stood, and genuflected / with the informed hush of a troupe of mime artists" ("The Upper Room"). And so it is ultimately in his priestly engagements with the outside world (in orphanages, hospitals, and prisons, for instance) and in his "secular" life that he finds transcendence. As he says about Durrell in "The Road to Emmaus," "All I know now / is the more he loved me, the more I loved the world." It seems that the structure of the secular world, more than that of the church, is most spiritually meaningful to him. He writes about Miami, for instance: "How I love your decks, bridges, promenades, and balconies— / the paraphernalia of connection" ("The Prodigal Son"). It is human connection that remains of utmost importance for Reece, and oftentimes his religious training seems useless to him in his engagements with others, as in "A Few Tender Minutes":

Before me is a man who does not disclose his crime, a Native American who will be released tomorrow … . For forty years, he tells me, his job has been to greet new inmates, which gave him money for toothpaste and pencils. Behind him, a mural of crude voluptuous angels covers the cinder blocks: their wings and breasts have absorbed the Clorox stink of the place. What prayer is in my book for him? The guard picks at his nail beds with his key. He says: "Two more minutes." My crucifix dangles from my chest like a fledgling.

It seems that it is Reece's empathy that has led him into the priesthood, but religion is often insufficient to help the others he cares so deeply about.

Throughout the collection, in the course of autobiographical meditations, Reece engages issues surrounding homosexuality, referencing the Mesopotamian myth of Gilgamesh, a poem fragment by Sappho, and an apocryphal gospel. However, homosexuality is not, here, a subject that in itself necessitates much commentary. In fact, Reece at times seems eager to move away from—or to transcend—sexuality, as in "The Prodigal Son": "The soul has no sex and I am relieved / to speak of a thing alive in the world that has no sex."

After the opening poem, the finest poem in The Road to Emmaus is the long prose poem "Hartford: Visions," a meditation on Reece's family history and his conflicted relationship with his mother. Lyricism returns full force in this poem, along with a vatic voice enmeshed with the contemporary world, as Reece effectively incorporates Old Testament texts in such passages as the following:

Long ago, missionaries tore down the sacred lodges of the Mohegans; now their casinos brighten the land like comic strips. They have healed the wounds of my people lightly, saying: "Peace, peace," when there is no peace.

Why do you make me see wrongdoing and look at trouble? A Puerto Rican mother weeps, her stabbed son intubated before us. Fluorescence illuminates their pietá of pumps and wires.

The central occasion for "Hartford: Visions" is a visit Reece and his mother make to a snowy cemetery, looking for the graves of their family members. Despite their past disagreements, Reece writes movingly of his mother, and their visit to the cemetery becomes a spiritual event:

Passing beneath the sign "The Dead Shall Be Raised," erected upon faux-Egyptian granite columns, here is my mother, visiting the graves in their snowy ruins. Regard her, for she, like the city, was young once. "Do not say that I was beautiful once and now am old," the mother says to the poet, "Do not say that." And so the poem changes like the snow: the snow is white and black like the universe it came from. Hartford listens down the cemetery's long corridors. How lonely sits the city that once was full of people. Below the coffins are thick with facts like filing cabinets; some of the facts are correct, some misplaced, as the dead settle into their final category of aging, becoming a repository of mystery.

The poet Wallace Stevens, who was a resident of Hartford, also haunts this poem. Stevens wrote, "The poet is the priest of the invisible." Reece writes, "A poet, like a priest, works with facts and mysteries: the facts mysterious, the mysteries factual." And so it seems that, for Reece, poetry and the priesthood are two aspects of the same vocation. Both poetry and religion are explorations of mystery, and require a deep engagement with uncertainty. As Reece writes in two passages of "The Upper Room,"