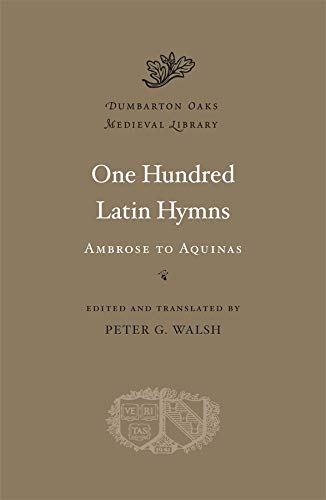 A collection of medieval hymns perfect for Holy Week.
April 2014

Sometimes a book that has been put aside for a while and unintentionally overlooked suddenly seems to glow and shimmer on its shelf. There may be multiple causes for this new attention: a reader may feel a fresh urgency ("No more delaying or forgetting— I NEED to encounter this author now, or ought to hear those sorts of words"), or the calendar or some other occasion may make the book newly desirable, acutely timely. The latter feeling led me last week finally to pick up One Hundred Latin Hymns, a handsome copper-colored volume in Harvard University Press's Dumbarton Oaks Medieval Library, and to savor its contents just in time for Holy Week. I could not imagine any more fitting reading for this high season in the church year. And maybe this volume will be a portal toward other fine volumes in this series, which includes the Vulgate Bible, saints' lives, and collections of medieval lyric poetry.

This particular anthology of both Latin hymns and English translations was published in 2012, and after editorial kindness provided me with a copy, well, it pretty much sat on a shelf looking obligatory, even slightly annoyed by my misguided neglect. Despite its ranging from Ambrose to Aquinas, it became for me something like the spinach of devotional titles in my possession— no doubt good for me whenever I would finally read it, but somehow not exciting my taste currently. Now, during Holy Week, this collection feels like it was printed last night and delivered to my door by courier, one who is still standing around expectantly to see what I think, so strong is my interest and attention.

One Hundred Latin Hymns covers the greatest span of hymn-writing in the church's history, although it's worth remembering that as a worship practice, believers' singing of religious songs goes back to the church's earliest days, even to the events that Holy Week commemorates: "When they had sung a hymn, they went out to the Mount of Olives," we read at Mark 14:26 (see as well Matt. 26:30), concluding the narrative of the Lord's Supper and suggesting the singing of the Hallel Psalms (113-18) as a part of Passover observances. Think too of Theodulf of Orleans' hymn "All Glory, Laud and Honor," included in the present collection but likely most familiar to churchgoers in John Mason Neale's rendering: "To Thee before Thy Passion / they sang their hymns of praise; / To Thee now high exalted / our melody we raise." Then there is Pliny the Younger's famous letter to the emperor Trajan, reporting what some Christians declared: "they had met regularly before dawn on a fixed day to chant verses alternately among themselves in honor of Christ as if to a god."

Peter Walsh's English versions are crisp and carefully rendered, and the editors' notes make it clear how sensitive he was in following, or in a few cases roughly approximating, the meters of the Latin originals. Consider the line from Ambrose's "Splendor paternae gloriae,"—"Jesus, observe the wavering, / and by your glancing put us straight"—or, in a later hymn, "O kind creator, bend your ear." Such lines sound like they were composed by one with a seeking, sensitive heart, and could be sung in the same spirit. Another Ambrose passage makes the meaning of today, Good Friday, newly vivid in our imaginations: "Now dawns the third hour of the day, / the hour when Christ mounted the cross; let our minds harbor no proud thought, / but foster eagerness for prayer." Other early hymns by or attributed to Ambrose here dedicate themselves to John the Evangelist and miracles and martyrs, and some reflect, as they do throughout this book, the doctrinal controversies of the times. "Aid us, Trinity," Ambrose writes in one hymn, and at the other end of the collection, we find Thomas Aquinas' grand Eucharistic hymns.

The noticeably lengthy hymns by Prudentius, that overlooked early Christian poet, signal to us that even at an early stage hymns could fulfill literary as well as liturgical purposes; Prudentius' full texts could not have easily been incorporated into worship. "Vigilate," says one of his hymns in Christ's voice, or be watchful, for I am very near. Many readers will enjoy finding full texts of widely known components from the Catholic Mass or other worship contexts, such as the "Te Deum laudamus" (with the "Sanctus" from Isaiah 6:3 therein) and "Te lucis ante terminum," or Venantius Fortunatus' "Pange, lingua" and "Vexilla regis prodeunt." Students of literature may recognize that last hymn as the one Dante cagily ironizes in the final canto of his Hell, where the poet gives this hymn's opening line a critical extra word, inferni: "The standards of the king of hell advance." There is further irony here, since the original hymn evokes a Roman triumphal entry; at the end of Inferno, there is no advancing whatsoever, except for our unusual travelers Dante and Virgil. (A similar context, that of entrance liturgy, gives further meaning to Zechariah 9:9-17, a lectionary text at our church's Palm Sunday service earlier this week.)

Fortunatus' hymn, with reoriented imagery of Roman military banners, reminds us yet again of the deep classical influences and presences in these hymns and throughout so much of early Christian expression. This volume's helpful introduction informs us that pope Damasus in the 4th century wrote hymns in classical meters, and Hilary of Poitiers compiled a hymnbook whose works similarly picked up paganism's poetic heritage. This cultural overlay is visible in the language of the hymns themselves. Thus we hear in hymns by both Sedulius and the Venerable Bede how Christ has defeated "Tartarus," and one interesting hymn focuses on the sun in strikingly Greek terms (and strikingly, too, to our modern ears): "Now Phosphorus demands his car," an image of Phoebus or Sol in his chariot. One might consider this name, meaning "Light-bringer," to be a way of evading the Latinate form "Lucifer," but the next stanza shows that this author had no such qualms, describing the sun as "typusque Christi lucifer," or "the light-bearer, symbol of Christ." The well-known "Dies irae" pairs David and the Sibyl, and one hymn even echoes a technique of repetition within an elegiac couplet most recognizable in, of all poets, Ovid.

Christians today can never overestimate, I'd venture to say, the deep impression of classical culture and its literature on the major figures and writers of the church, early church of course but well beyond it, too, as in the Carolingian Renaissance. This hymn collection may also help us to correct a popularly held misconception of the "dark" Middle Ages. A professor of mine once described the medieval era as "a thousand years without a bath"— and he was an esteemed Chaucerian! (Admittedly, the comment was meant as a bit of showiness in a lecture hall.) Instead, what a testimony of deep learning as well as reverence is on display here. I suppose this is an unsurprising element in hymns written by mainly clerics, but for students, educators, or any thoughtful Christian, there is something heartening in this earnest appeal to Christ to illuminate the life of the mind. "Descend in the minds of your servants," we hear in the powerful "Veni, creator Spiritus." Aquinas speaks of mental celebration "mentis iubilatio," and Bonaventure writes, "In our remembering let us bear / the punishment and hostile taunts." And here is Peter Abelard, a little more elaborately: "Meantime our task is to apply our minds, / To seek the native land in all our prayers."

The selection of hymns by Abelard provides a clear contrast with previous writing styles. His works featured here reveal Abelard to have been the Nas or Mos Def of medieval hymn composers. We can hear his wordplay in one English rendering, "When the Virgin conceived by word the Word," but the English cannot capture what follows in the Latin: "ex se verus / ortus est Oriens," or "From her arose / the true dawn from the east." On the other hand, sometimes the English version adds its own contemporary coloring, as with the hymn titled "Give Mary a tambourine" (for the Latin "tympanum"), which instantly makes me think of the Virgin amid the cast of Godspell, wearing bell-bottoms as, to quote the hymn, "she sings, let her incite /Hebrew women to song."

A few hymns here will create a wonderful pairing in the mind's ear with already known lines, so that "Devotedly, with kindly heart, / receive our tears mingled with songs," can't help but bring to memory those lines by the masterful Isaac Watts: "See from His head, His hands, His feet, / Sorrow and love flow mingled down." Watts also writes, "Were the whole realm of nature mine, / that were a present far too small," and perhaps my favorite discovery in this collection is by Stephen Langton, who honestly has mainly been a name to me in my studies so far. One short, simple stanza of his reminds us of why Watts centuries later wrote what he wrote, and points toward a gratitude finally inexpressible, no matter the glories of these medieval Latin hymns:

Brett Foster is associate professor of English at Wheaton College. His first book of poetry, The Garbage Eater, was published in 2011 by Northwestern University Press. A second collection, Fall Run Road, was awarded Finishing Line Press's 2011 Open Chapbook Prize, and appeared in 2012. His poems have recently appeared or are forthcoming in Anglican Theological Review, The New Criterion, Shenandoah, Southwest Review, and Yale Review.

A great collection of hymns, indeed. Sadly, they will likely have no appeal to drum banging evangelicals, who aren't keen on Holy Week in any event or to novus ordo Catholics content with the banal, sappy, inane OCP elevator music ditties sung supposedly as serious worship, accompanied by a geetar and a tambourine with flashing LED lights. When the Son of Man returns, he will likely not find much faith or proper liturgical singing, except among the non instrumental psalm singing Presbyterians and extraordinary-form Catholics. Attributed to Augustine,"He who sings well prays twice" captures the importance of well-ordered, musically excellent singing to the glory of God. The Church very much needs it.