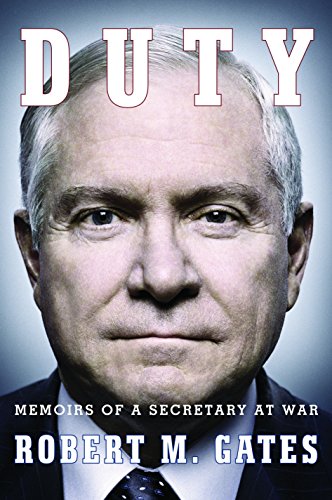 According to the rules of a Washington parlor game, there is only one thing to do upon the release of a memoir by a former high-profile official: search the text for the most salacious, damning, or quotable put-downs of other officials and shout them over Twitter at your political opponents. Thus, if you have heard anything about former Secretary of Defense Robert Gates' new memoir, Duty: Memoirs of a Secretary at War, you know that he has some sharp criticisms of Vice President Joe Biden, Senate Majority Leader Harry Reid, and former Speaker of the House Nancy Pelosi for being partisan and short-sighted. He is especially contemptuous of Congress. In private, he says, members of Congress were "sometimes insightful and intelligent," but TV cameras "had the effect of a full moon on a werewolf." Some members of the House Foreign Affairs Committee "were rude, nasty, and stupid."

But Gates is an even-handed critic, and both sides have plenty of material to work with. President George W. Bush was "much more intellectually curious than his public image," but "rarely questioned his own thinking." General David Petraeus was a hero for making the surge of U.S. troops in Iraq work, but Gates recognized that "we would need a strong and seasoned four-star officer" to serve as Petraeus' boss—because, Gates implies, Petraeus was the sort of subordinate that needed supervision. And the person who comes in for the most criticism is Gates himself: the memoir is riddled with admissions of his own failings, a model of self-flagellation.

Gates' criticisms are surprising because, while in office (from December 2006 to July 2011), he cultivated a restrained, non-partisan, cool persona. He won widespread praise for his straight talk—when asked during his confirmation hearings if the United States was winning the war in Iraq, he famously replied, simply, "No sir." Now he comes clean: it was all an act. He repeatedly admits he was "seething" underneath and talks about "the dramatic contrast between my public respect, bipartisanship, and calm, and my private frustration, disgust, and anger." He believed, rightly, that a public image of dispassionate objectivity would be a more effective tool for pushing his agenda than giving vent to his actual feelings. But if his earlier dispassion was a service to the nation, one wonders what the legacy of this memoir will be.

Or, at least, the legacy of its reputation. In truth, Gates' book is not primarily a witty record of others' failings. Treating it chiefly as a gossip repository does it a disservice and, in fact, overlooks the bigger scandal that he records: the brokenness of the federal bureaucracy, the Department of Defense foremost. If what Gates records is true, it is simply astonishing what the Secretary of Defense cannot do within his own department. Gates spends long sections of the memoir detailing his battle with the bureaucracy over improving medical care for veterans; developing, procuring, and delivering mine-resistant ambush protected (MRAP) vehicles; building and buying more unmanned aerial vehicles for intelligence, surveillance, and reconnaissance; and more. In Gates' view, the Department was focused almost entirely on preparing for the next large conventional war rather than winning the wars it was already in, the modern form of the military-industrial complex.

Gates' criticisms of the bureaucracy raise questions about the manageability of the American military establishment—indeed, of the American government. An individual human being can effectively manage only so many relationships at once. As the Defense Department has grown in scope and complexity since World War II (along with the rest of the government), the obvious solution is to introduce more layers of management and delegate more responsibilities downward so that the senior leadership deals only with top-level, strategic issues. But that also means the senior leadership is effectively powerless when it comes to day-to-day management and implementation—which is, of course, where strategy goes to die. The Secretary of Defense may be the least effectual employee in the entire department.

One gets the impression, from Gates' account, that the president and the National Security Council deliberate and decide with great earnestness while the bureaucracy—oblivious, inert, and imperturbable—keeps on doing what it has always done. I am convinced, from my own experience working on the NSC staff, that bureaucratic drift is a far more convincing explanation for America's foreign-policy short-sightedness than the dark suspicions of critics who warn of American imperialism or the corporate dominance of national security policy.