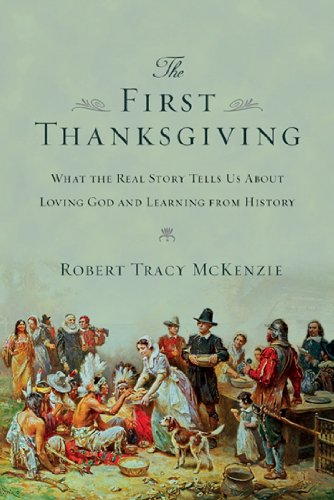 The First Thanksgiving: What the Real Story Tells Us About Loving God and Learning from History
Robert Tracy McKenzie
IVP Academic, 2013
219 pp., 24.0

Beyond turkeys and touchdowns.
November 2013

As a student at the University of Washington, I took a class on the Civil War from Tracy McKenzie. Each morning that spring he would saunter in, take off his watch, and begin class. He always made it clear that we were there to learn, together, from those no longer living, and to hear what they had to say. This approach stemmed directly from his faith. McKenzie is a Christian, and he taught us to think Christianly about history.

In his new meditation on the myths surrounding Thanksgiving, McKenzie does this for a larger audience. That audience includes all students of history, both of the amateur and more academic variety. Now the chair of the history department at Wheaton College, he calls his readers to dig into the assumed connections between patriotism and faith and between the national civic holiday of Thanksgiving and the everyday Christian people who were the Pilgrims.

The study of history is worth our time as people of faith, McKenzie says, since Christianity is grounded in the real past. In light of this, it is time to stop the use of history by Christians as ammunition in the "culture wars." My own sense is that McKenzie is responding to the likes of Glenn Beck and David Barton, who, well meaning or not, have conflated Christianity and their version of the American experience at great cost.

Why Thanksgiving as a site of reflection? It is the one holiday American Christians hold up as the ideal melding of "national identity, religious heritage and historical memory." It is a "wonderful proving ground" for learning to think more critically about the past, and a demonstration of how commemorations of historical events can be littered with pitfalls.

There is a difference between "the past" and "history," a distinction that gets thoroughly explored in this recounting of Thanksgiving. The roaring maelstrom of human events that is "the past"—something that is truly past, and cannot come again—must be distinguished from "history," which involves a very human understanding of that sea of occurrences. Noting the difference between the two is critical if we are to have a right view of Thanksgiving.

McKenzie spends much of his time considering this right view. One of the ways he does this is by looking at the perils and promise of using historical evidence, especially at what the Pilgrims left behind. Most notable is the account of William Bradford's Of Plymouth Plantation. Bradford traced the Pilgrims' path from Britain to Holland and then to Massachusetts, where he served as the Pilgrims' governor from 1621 to 1657. The only real note we have of a Thanksgiving-like celebration by the Pilgrims themselves, however, is not to be found in Bradford's account, but in a 115-word anecdote by his assistant, Edward Winslow.

That anecdote mentions a gathering of the survivors of the Pilgrims' first devastating winter, an encounter with local Native Americans, and a three-day feast mostly devoid of women (most had died during the winter). That's it. McKenzie is right in showing that we actually know very little about the "first" Thanksgiving. Its origins as an expressively religious holiday are thin indeed.

In contrast to this slim foundation, McKenzie looks at where the Pilgrims came from, both in time and space. In what he playfully calls "Odbody's Axiom" (after Clarence Odbody, the guardian angel of Frank Capra's It's a Wonderful Life), he asserts that "context is indispensible to understanding" and that human lives unfold in multiple contexts that both reinforce and diminish their agency. Those contexts include the Protestant Reformation, the Pilgrims' origins as dissenting (and then separating) members of the then-new Church of England and their literal and spiritual journey as radical activists for change within that church.

He debunks, well and ably, the tired old chestnuts surrounding the Pilgrims' motivations for leaving their families and the relative freedom of Leiden, Holland, for the unknown shores of North America. Remembering that the Pilgrims were not perfect—and were beset by worries about money, security and how to integrate (or not) with the wider culture—is a big part of his retelling of the Pilgrims' story. The temptation to look only at the positive parts of history, especially where Christian heroes are concerned, is very strong, but ultimately unwise, he says.

The Pilgrims were not "proto" Americans, and definitely not property-rights loving, compact-creating, "first" citizens of the future United States. They were an odd lot, at least to us, not celebrating Christmas, preferring civil marriage to marriage in church, rejecting the King James Bible, loving bright clothes and much preferring beer over water.

With all these reminders, McKenzie helpfully calls us away from the use of "revisionist" as a pejorative for history we do not like. History is not received like Scripture. And the history of Thanksgiving was subject to lots of revision over the years, especially in the middle of the 19th century. The Pilgrim story, McKenzie points out, was not culturally convenient prior to and immediately after the Civil War, with the New England connection to the tradition quite strong, abolitionist governors using their Thanksgiving proclamations to decry slavery, and Native Americans not especially respected.

After the war, however, a long process of altering the Pilgrims' legacy reached fulfillment in the secularization of Thanksgiving. Ironically, this came about with the emphasis on the holiday as a time for family gathering by the early 20th century. McKenzie, in looking at hundreds of public political statements about Thanksgiving since the end of the 1600s, including those by U.S. presidents, shows how the Pilgrims gradually but seemingly inevitably become attached to broadly "American" values, subsumed into an image not of their own creation.

Whereas going to church was a big part of Thanksgiving in the antebellum period—McKenzie quotes a young boy's complaint that Thanksgiving was "rather an awful festival … very much like Sunday, except for the enormous dinner"—that changed within about a century to a full-fledged emphasis on more earthly delights, and the Pilgrims as ideal immigrants. Now, McKenzie says, the Pilgrim story is regarded as a romanticized example of intercultural engagement.

With this in mind, Christians should remember their interpretative limits: our understanding of what Thanksgiving is has been constructed by the generations that have preceded us. And yet history for the person of faith is not just a cultural toolkit, useful only in how it can unite us (or divide us). Neither is it necessarily "Providential," in which every act has a clear "why" associated with it.

McKenzie argues for an alternative, for the practice of history done Christianly. As an adverb, it involves the idea that we can know, in the most general sense, that God is at work in history, but we cannot, without risking dangerous presumption, identify specific intentions on God's part. Thanksgiving is his long case in point. Combining knowledge with humility should be our goal in the study of the past. Refraining from self-flattering moral judgment, we should pursue history as an opportunity for moral reflection, looking to what figures in the past say about their own time, and for all time.

William Thomas Mari is a PhD student in communications at the University of Washington.