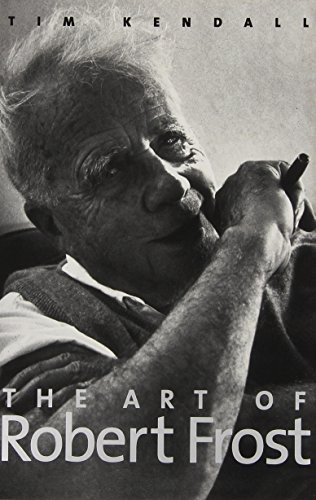 Tim Kendall's The Art of Robert Frost is a cross between an anthology and a scholarly monograph. It offers a generous selection of poems from Frost's first four published volumes—A Boy's Will (1913), North of Boston (1914), Mountain Interval (1916), and New Hampshire (1923)—along with ten poems from later volumes. In addition, it offers a two-page introduction to each volume and a three- or four-page analysis of each poem, complete with references to Frost's other published writings, his literary sources, and recent Frost scholarship.

According to its dust jacket, The Art of Robert Frost is "the first book to combine selected poems with a critical study." That may be true, although Frost's friend Louis Untermeyer was the first to publish anthologies of Frost's verse with his own commentary, starting with Come In and Other Poems in 1943 and ending with Selected Poems in 1971. Untermeyer's casual glosses on his friend's poems, however, do not rise to the level of criticism. Kendall's certainly do.

On the other hand, Untermeyer's Selected Poems is more comprehensive than Kendall's volume, which is limited, by and large, to poems copyrighted before the end of 1923. Because he was working with Frost and his publisher, Henry Holt, Untermeyer didn't have to worry about copyright; he was free to pick and choose from the poet's entire body of work. Kendall, however, ran smack into the Sonny Bono Copyright Term Extension Act, passed by Congress in 1998, which extended copyright protection for works published after 1923 by another twenty years.

For that reason, Kendall's book will not replace Untermeyer's Selected Poems, let alone Edward Connery Lathem's once-standard edition of Frost's collected poems or the definitive Library of America volume edited by Mark Richardson and Richard Poirier. Nor will it replace Mordecai Marcus' The Poems of Robert Frost: An Explication (G. K. Hall, 1991), which offers "a basic commonsensical explication" of all 355 poems in Lathem's edition. ...