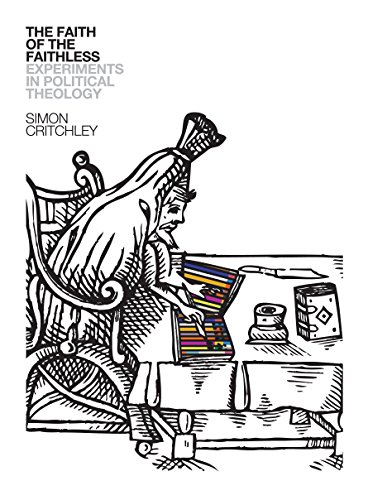 The Faith of the Faithless: Experiments in Political Theology
Simon Critchley
Verso, 2012
302 pp., 24.95

If the last five years of American politics have demonstrated anything, it's that Marx's dictum about the modern state couldn't be more indisputable: our government is the executive committee for the common affairs of the bourgeoisie. Now more than ever, our liberal democracy is a corporate franchise, and the stockholders are demanding an ever-higher return on their investment in America, Inc. Over the last four decades, the Plutocracy has decided to repeal the 20th century, to cancel the gains and protections won by workers, the poor, and others outside the imperial aristocracy of capital. Enough of this coddling of those Ayn Rand vilified as "moochers" and "looters." Return the country to its rightful owners: the "Job Creators," the Almighty Entrepreneurs, those anointed by Heaven to control the property interests of the American Empire. Endowed with the Divine Right of Capital, they deserve our thanksgiving and reverence, for without them we would not deserve to live, such common clay are we.

Lest anyone think that the re-election of President Barack Obama invalidates this judgment, think again. Mitt Romney may have been a more egregious and openly disdainful lord of the manor, but Obama has compiled an impeccable record of imperial corporate stewardship. Despite all the hype about a rising progressive coalition of non-whites and young people, there is no reason to believe that Obama's second term of office will be any less a model of deference.

The Plutocracy's beatific vision for the mass of Americans is wage servitude: a fearful, ever-busy, and cheerfully abject pool of human resources. Rendered lazy and recalcitrant by a half-century of mooching, American workers must be forced to be free: crush labor unions, keep remuneration low, cut benefits and lengthen working hours, close or narrow every avenue of escape or repose from accumulation. If they insist on living like something more than the whining, expendable widgets they are, reduce them to a state of debt peonage with an ensemble of financial shackles: mortgages, credit cards, and student loans, all designed to ensure that the wage slaves utter two words siren-sweet to business: "Yes, boss." It's the latest chapter in the depressing story that David Graeber relates in Debt: debt as an especially insidious weapon in the arsenal of social control. "There's no better way to justify relations founded on violence … than by reframing them in the language of debt," he writes, "because it immediately makes it seem that it's the victim who's doing something wrong."

Alas, we're living in the early, bewildering days of the demise of the American Empire, the beginning of the end of that obsession-compulsion known as the Amerian Dream. The reasons are clear, if often angrily denied: military hubris and over-extension; a stagnant monopoly capitalism with a bloated financial sector; a population on whom it's dawning that low-wage labor is their inexorable fate; ecological wreckage that can only be limited or repaired by cessation of growth. The patricians' task will be threefold: finessing the increasingly obvious fact of irreversible imperial decline; convincingly performing the charade of democracy in the face of popular vassalage; and distracting or repressing the roiling rage and tumult among the plebs. How will the elites maintain and festoon their ever-more untenable hegemony?

Empires have always evaded but eventually accepted their impending senescence: first, willful, vehement denial, and redoubled, often violent devotion to the imperial customs and divinities; then the slow, entropic apocalypse of demoralization and retrenchment. As imperial twilight descends, a brisk if melancholy market of fashions in acquiescence will undoubtedly arise. Reconciled to the dystopian prospect of a world engulfed in war and famine, the affluent will sport a variety of brands of what Simon Critchley dubs "passive nihilism," a withdrawal from politics into tasteful, well-guarded enclaves of resignation. Radical visions may revive as well, but right now they're dispiritingly feckless. Looking at first like a pentecost of utopia, the "Occupy" movement has dismally failed to gain any popular traction, in part because of the utter mediocrity and incoherence of its demands. "Fairness" is populist pabulum; "we are the 99%" is a slogan, not serious political analysis. The injustice and indignity of capitalism have seldom been so openly wretched, but as Graeber ruefully observes, just when we need "to start thinking on a breadth and with a grandeur appropriate to the times," we seem to have "hit the wall in terms of our collective imagination."