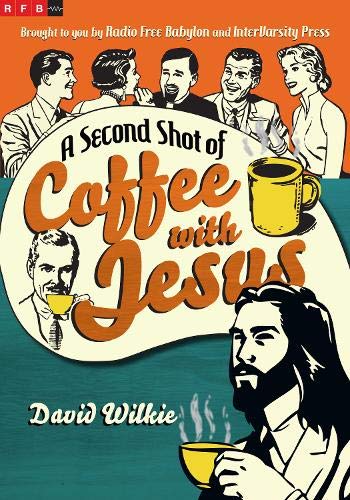 Icon as comic, though? Indeed. Folk-art too, if the innocence of that category can be sullied by Wilkie's trademark sarcasm. Comics as a genre are uniquely connected to satire, to the saying of difficult, timely things. They're a Trojan Horse way of telling the truth, getting us to lower our defenses for a laugh or two, only to find ourselves confronted by a sudden phalanx in the pantomime. In this sense, they're icons particularly suited for the very iconoclasts who'd crack a joke about them if they came in their true form, suited for the church of our consumerist self-obsessed pietism. Icons for those who have hears to hear, or those who have hurts to heal, those who have opinions to share.

We, like every generation of believers, make Jesus in our image. In this sense the Christ of Coffee is in many ways just who I perceive Wilkie to be—Christological in mullet and beard. Americano on the breath. This Jesus is snarky, occasionally baldly sarcastic. But with that said, the collection is not notable for its barbs or papercuts. Rather, it's the sincerity lying behind things that makes it stand out.

Somehow, Wilkie manages to produce repetitive, derivative, clip art-sourced four-panel comics about Jesus on coffee break that rise above the polemical to the truly pastoral. Icon? Surely, but in this sense the collection takes on an even more distinctive cast: comic as devotional literature, not merely a less-rabid cartoon cousin of Christian "Chick Tracts." It tells the truth, but the result, curiously enough, is not to make readers feel preached at but rather to feel like they sort of just actually had coffee with Jesus.

The Christ of Wilkie's pages reassures, convicts, retorts, encourages, rebukes, sees us. Our opinions, sins, vices are put in short and brutal sentences, laid before the Son. He sips the black brew and accepts, corrects, loves. It is good.

I interviewed Wilkie in early 2014, as the first collection of his comic was being released. As we corresponded by email, I was struck by the man's kindness, his sincerity. He has a conviction of opinion that both gives his humor teeth and keeps it from drawing too much blood. I asked him about his relationship with the church. "Church," he replied, "is a collection of very different people with one thing—one person—in common. Throw all these very diverse people into a building and tell them to worship, tend to the needs of others, learn, grow and make an impact on their community. It can be very dysfunctional at times, especially if you start to lose focus on the one person you have in common… . If we can step back and look at ourselves—our very selfish selves—maybe we can laugh before pride takes us completely off the rails. But you have to be able to laugh at yourself first, because you might be the problem, not everybody else."

It is precisely this humility of humor, large and startling in its own way, that points to what I hope will be the true legacy of Coffee. Rather than blazing new comedic trails, pioneering cartoon art, or codifying some brilliance of original thought, it is the unitive speculation—what would Jesus say to the sincere nonsenses that we spurt on a daily basis?—that makes one think, that makes one feel charitably toward the weak of heart or opinion, that makes one laugh and wave some Trojan truth past the guards at the gates. This is the invisible legacy that we feel occasionally and forget often—the unknowable rippling influence, like stones tossed in water, of how one's thoughts, words, actions, postures, photoshopped clip-art—might somehow have a lasting effect upon the indelible soul of another.

This is street-level iconography for the age of digital consumerism, chatechesis via virality, at once grotesque and beautiful.

In one of her letters, Miss O'Connor wrote, "I don't deserve any credit for turning the other cheek as my tongue is always in it." Whether satirical Christlikeness disqualifies us cheek-turners from the deeper life of Jesus, the deeper action of discipleship, I'll leave for you and Flannery to decide. Meanwhile, I'm going to hang out with David Wilkie for a while, and try tossing a few tidbits into the Black Hole of the Christian Cultural Navel.

Something is bound to come out of it.

Paul J. Pastor is a writer, grassroots pastor, and contributing editor to Leadership Journal. His debut book on the Holy Spirit in the Christian life is forthcoming in 2016. Paul lives in Portland, Oregon, with his wife, Emily, and two children.