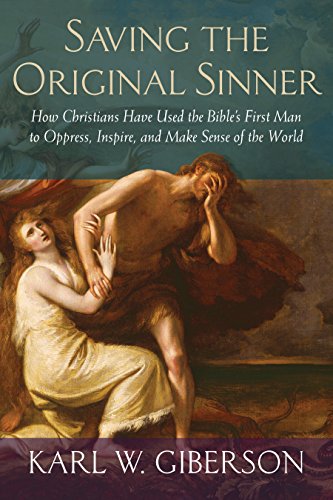 A conversation with Karl Giberson.

Editor's Note: Karl Giberson and I have organized a symposium on the historical Adam, to be posted on the Books & Culture website—a venture inspired in part by Karl's new book, Saving the Original Sinner: How Christians Have Used the Bible's First Man to Oppress, Inspire, and Make Sense of the World (Beacon Press). Karl and I first met at a memorable conference in 1998, which he has described in the pages of B&C. Since that time he has written many pieces for the magazine, and we have been good friends for almost two decades now. Here, as an appetizer for the symposium, I ask Karl a few questions about his project. The conversation was conducted via email on May 27-28.

Karl, you've written a number of books over the years on creation and evolution and other issues relating to science and Christianity. What prompted you to write Saving the Original Sinner, with its focus on "the historical Adam"?

Saving the Original Sinner was inspired by two related things that I was thinking about. The first was my growing sense after decades in this conversation that Adam was a much bigger issue than evolution. I came to realize that most Christians would probably reconsider their opposition to evolution if there were a way to keep a historical Adam in the picture. Wheaton College, in fact, was quite explicit on this on point. They revised their faith statement to include a specially created first couple as the start of the human race, but allowed that evolution was acceptable for the rest of life on this planet. This opens the door to the Big Bang, the ancient age of the earth, and most of evolution. I began to see that the large war being waged against evolution was really a proxy war being fought to protect Adam. You can see this in the energy expended by anti-evolutionists in arguing that evolution is incompatible with Christianity—the arguments are mainly about Adam. So much so that John Schneider got fired from Calvin College for writing a paper arguing that Christianity did not need a historical Adam.

The second thing that struck me came out of conversations with Peter Enns when we were both in leadership roles at BioLogos. We were intrigued by the many proposals from Christians determined to protect a historical Adam from being demolished by science. Many evangelicals—like most of the readers of Books & Culture—have made peace with modern science and accepted evolution, the Big Bang, the great age of the earth, and so on. And they recognize that evolution essentially rules out the possibility that our species consisted of just two people a few thousand years ago. Nevertheless, because St. Paul builds his theology—and his Christology—on the sin of Adam, they are inclined to retain a historical Adam of some sort. These efforts are not driven by biblical literalism or any attempt to protect the story in Genesis from science. They are motivated by Paul. They envision new "Adams" that are often quite different from the Adam in Genesis, but fit more naturally into the evolutionary history of our species. So we find Adam being the head of a tribe. Or being a metaphor for a tribe of humans. Or being selected from a tribe of biologically human creatures to bear, for the first time, the image of God. Or the first man awakened to a sense of the divine. These re-envisioned Adams are far more ancient than the Adam of Genesis; they are evolved creatures, not created from dust. They never lived in the Middle East, where we think Eden was. And so on.

The Adam conversation intrigued me. To preserve the authority of Paul—who most likely believed in the exact Adam described in Genesis—people are inventing new Adams quite different from the guy in Genesis. This really drove home the point about how important Adam was, not on his own terms, but as a theologically significant part of our understanding of sin. So I decided to step back and ask the question "How exactly did Adam become so important?" That is the story I try to tell in Saving the Original Sinner.

I want to be sure I'm understanding you here. You seem to be saying that we're forced to make a stark choice between the notion that "our species consisted of just two people a few thousand years ago" and the notion that we must chuck out altogether the traditional Christian understanding of sin—a tradition that is by no means monolithic, but in which the story of Adam and Eve always figures prominently. In between those alternatives, you are saying (if I'm reading you correctly), there are various unsatisfactory attempts to reconcile what can't be reconciled—made by people like C. S. Lewis, for instance. Do I have that right?

That depends on what we mean by the "traditional Christian understanding of sin." In the conclusion to Saving the Original Sinner I argue that a deep and meaningful concept of sin as an intrinsic part of human nature is a natural implication of our evolutionary origins. If we understand sin as a "pathological selfishness" (which I think captures it nicely), we can easily see how it was produced by natural selection. The question is whether the "traditional concept" needs to include a particular mode of origination, or simply an acknowledgement that humans are deeply flawed creatures. It seems to me that the Christian tradition, at least in the West after Augustine, has strongly—and insightfully—affirmed that humans are sinful creatures. Christians have also believed that our species originated with two people placed in Eden a few thousand years ago. It was only natural for them to connect these two, just as they once joined geocentrism to biblical allusions to a fixed earth.

The challenge is figuring out whether Paul was making a central theological point about the necessary historical reality of Adam and his Fall, or whether he simply assumed that reality and built it into his larger point about salvation from sin in Christ. What I find unsatisfactory and even theologically suspect is the notion that we must keep Paul's teaching about a historical Fall without keeping the story of the first couple that he assumed were responsible for that Fall—and death in general. It makes more sense to recognize that we do not need a "historical Fall" to explain our "fallenness." As G. K. Chesterton famously observed, "original sin" is "the only part of Christian theology which can really be proved."

Given that human sinfulness is not being challenged here, I see no need to develop an alternative version of "Adam and Eve" to preserve the historicity of the origin of sin. I would also note that the Fall, as traditionally understood, simply does not comport with what we know of natural history even apart from human evolution. To take one famous example, the dinosaurs went extinct millions of years before humans so clearly death and suffering were rampant long before human sin entered the picture.

There are several themes I'd like to pick up here—maybe we can do that when we meet in Pasadena soon—but here I'll have to settle on one. If we think of sin as "produced by natural selection," what are the implications for our understanding of salvation? Does it change radically? Not at all? Somewhere in between?

For starters, I would point out that "salvation" is a rather muddy theological concept. In some traditions it leads, via sanctification, to the eradication of our sinful natures. In others it leads to speaking in tongues. Others understand it almost contractually, as a promise of eternal reward that cannot be revoked under any circumstances. Some understand salvation to be something we must "work at" continually. What is, to paraphrase Lewis, "mere salvation"? If we define "mere salvation" as the acceptance of our sinful situation and an openness for God to enter our lives and empower the "better angels of our nature," then we need no new definition. I do not believe we are condemned to hell because of sin, so I don't think of "salvation" as "saving us from eternal punishment." If "salvation" is defined as "canceling the condemnation we received from Adam," however, then we need a radically new concept.

What is the connection between "mere salvation" as you understand it and Christ's death and resurrection?

These deeper theological questions go far beyond what I am trying to argue in Saving the Original Sinner, and far beyond what I feel competent to comment on. Frankly, I would have to say that, in my long spiritual journey from a fundamentalist Baptist parsonage to where I am today, I have never found that all these pieces of the Christian puzzle fit together in any satisfactory way. I have often been challenged to explain how this or that central Christian idea "fits" with my science-driven understanding of history. My usual response is that these ideas can remain in the conversation just as they always have—as deep, often contentious, mysteries.

However, I can say that any theories of salvation, atonement, etc., that require a historical Fall as the origin of sin, imperfection, evil, and suffering in the world need to be re-examined. Far too much of this conversation is driven by certain theological assumptions about what must have occurred in history rather than what the evidence suggests did occur.

I will also say—and here I am probably confirming my critics' suspicions that I am a poor excuse for an evangelical—that I think we spend way too much time trying to figure out the meaning of Christ's death and resurrection and far too little time understanding his teachings. I think of Mark Twain, who famously said, "It ain't those parts of the Bible that I can't understand that bother me, it is the parts that I do understand."

Thanks, Karl. Even in this brief exchange, it's clear why many people (representing quite a variety of outlooks) care about the question of "the historical Adam." I look forward to the symposium—and to firsthand conversation soon.

Update: now that the series is complete, you can follow the symposium in its entirety below:

Symposium on the Historical Adam: