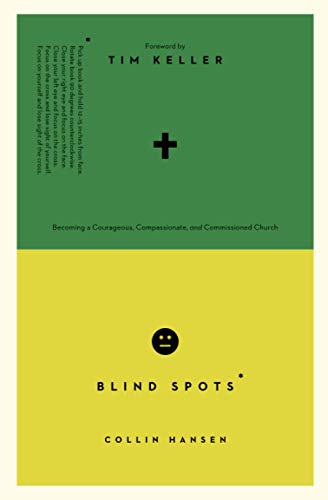 Listening to fellow believersand measuring ourselves against Jesus.

Some years ago, when Collin Hansen was quite young and I was younger than I am now, the two of us worked on the same hallway. Collin was one of the editors at Christianity Today magazine, and I was puttering away on Books & Culture. I've missed him ever since he left, but it has been good to see what he's accomplished as editorial director of the Gospel Coalition.

I mention this not simply in the interests of disclosure but because it has a bearing on Collin's new book, Blind Spots: Becoming a Courageous, Compassionate, and Commissioned Church. It's a kind of book that I would not normally read. The sorting of Christians into these various categories (even when undertaken, as here, without the sort of simple-mindedness that enables the endless blather about "millennials," say) isn't congenial to me. I wouldn't assume that such a book lacked valuable insights, but I wouldn't spend time on it myself. But because I know and respect Collin, I did want to read the book—precisely because doing so would allow me to see the church today from a different angle. Maybe I would become more aware of some of my own "blind spots." As Collin puts it, "I may not share or even understand your experiences. Maybe you're more successful than I am when arguing with people who are different from you. In any event, I know that unless we both step outside ourselves to hear our arguments from another vantage point, we won't enjoy church unity and an effective witness in the world."

What Collin has in mind when he speaks of "compassionate" Christians is quite clear: "You clothe the homeless, feed the hungry, nurse the sick. You write the letters, shame the offenders, protest the powers." I thought of Jonathan Wilson-Hartgrove and Rutba House, and of many young Christians I know. "Courageous" isn't so obvious. Wilson-Hartgrove and others who went to Iraq to protest against the US bombing, for instance, were certainly courageous, whatever else they were, but that's not what Collin has in mind here: "Maybe the most countercultural thing you can do today is stand firm and stay put. Not change your mind. Not assume new is better." He's thinking particularly of Christians who are "standing firm" against strong cultural pressures. The least obvious of the three categories is "commissioned." Here Collin is talking about pragmatic Christians (as they see themselves) of a kind particularly common in evangelicalism, whose churches "tend to dominate the skylines of small towns and suburbs across the United States. In a results-oriented culture, commissioned churches have found a formula that works."

Each category, Collin observes, has distinctive weaknesses as well as distinctive strengths. Christians of each variety need to listen to and learn from fellow believers whose emphases are different from their own. But above all—this theme is repeated again and again throughout the book—all Christians need to "shine light on our blind spots and measure ourselves against Jesus." This doesn't mean that, as believers, we'll always agree on what following Jesus entails. "We often seize on one aspect of his character and brandish it as weapon against other believers," Collin writes. "And we rope our partial Jesus into some of the nastiest conflicts."

Like much else in the book, this strikes me as being right on target. I must admit that, while I can think of specific individuals who fit each of Collin's three categories, most of the Christians I know don't fit readily in any of the three. The "compassionate," the "courageous," and the "commissioned" are all activists, so to speak, and in that sense the three ideal types have more in common with one another than they do with the vast majority of their fellow believers. But I greatly appreciate Collin's frank acknowledgment of our blind spots. This makes the concluding sentence of his book—which follows a quotation of John 17:20-21—all the more persuasive: "Jesus secures our faith in the promise that a divided church that often garbles his witness to the world can testify with one voice to the only hope in any age." Amen.