I thoroughly agree with Karl Giberson's main conclusion in his paper: "There is no original sin and there was no original sinner." The doctrine of original sin has been a foundational belief of Christian tradition throughout most of church history. It is a complex doctrine that can be broken down into two basic concepts. First, original sin is the very first sin committed by the very first man created, whom the Bible identifies as Adam. Second, all humans descend from Adam, and Adam's sin has been passed on to everyone through natural reproduction.

Old Testament scholarship and evolutionary biology undermine the historicity of Adam, and so too the notion of original sin. If Adam did not exist, then he could never have committed the first sin. And if there was no Adam, then all of humanity did not descend from him and his sin could never have been transferred to every human being. As an evangelical theologian I certainly feel the weight of rejecting this historic doctrine.

However, my justification begins by recognizing that Scripture and Christian tradition are intimately connected to incidental scientific paradigms-of-the-day. Both include ancient conceptualizations of astronomy, geography, and biology. In particular, the Bible and tradition feature an incidental ancient understanding of human origins—the de novo creation of Adam. The implications are obvious. No one today believes in a firmament, a heavenly sea, a 3-tier universe, or a geocentric world. Nor should we believe in the historicity of Adam, and as a consequence, the doctrine of original sin.

I do have a few concerns regarding Giberson's paper. First, why bother keeping the term "original sinner" in the title of his new book Saving the Original Sinner? This only adds confusion to an already confusing situation. As a physicist, should Giberson ever write a book on cosmology, would he entitle it Saving the Firmament when in fact he does not accept the ancient astronomical belief of a solid structure overhead? (In my opinion, the title of his book Saving Darwin also muddied the waters).

Second, Giberson's grasp of biological evolution strikes me as somewhat dysteleological. He seems to assume that natural selection is the "magic bullet" that drives the evolutionary process. Famed philosopher of biology Ernst Mayr noted this common error of focusing on the sorting of variability at the expense of the production of variability. In fact, Darwin in Descent of Man confessed that he had "exaggerated its [natural selection's] power" for rhetorical purposes in order "to overthrow the dogma of separate creations." Only a few years before his death, he observed that "there is still considerable difference as to the means [mechanisms of evolution], such as how far natural selection has acted & how far external conditions, or whether there exists some mysterious innate tendency to perfectibility." The last mechanism is certainly amenable to a teleological view of evolution, and it aligns well with the belief that humans are an inevitability of the evolutionary process, as suggested by Simon Conway Morris.

Finally, Giberson's use of evolutionary psychology to explain sinful human behaviors strikes me once again as dysteleological, and even unbalanced. He seems to be unaware of the evolutionary survival value of behavioral inclinations like empathy and co-operation. In The Age of Empathy (2009), Frans de Waal argues that these evolutionary proclivities are "the glue that holds communities together," leading to the emergence of civilization. Viewing evolutionary psychology from my evangelical Christian perspective, I see the "conscience" and "law written on the heart" (Rom. 2:15) as being created in the brain through a teleological evolutionary process, and given by the Lord to guide our moral decisions. We are not as notoriously "programmed by natural selection" to behave sinfully as Giberson proclaims.

One of the most valuable comments in the round of papers comes from Peter Enns. He unapologetically confesses, "Since my greatest scientific achievement is doing puppet shows with dissected feral cats in high school biology, I feel I have no right to contest [biological evolution]—and I likely speak for many other evangelicals in that regard." How I wish my evangelical brothers and sisters would have the intellectual honesty and integrity of Enns. It is disturbing to read anti-evolutionists pontificate about evolutionary biology when in fact most have never held a fossil in their hands, or worked at an outcrop, or published a refereed paper on evolution. Responsible academics do not misappropriate their academic authority. And Christians should not bear false witness.

I am grateful that Peter Enns and John Schneider raised the pastoral issue related to origins. To use Schneider's words, there is a "disaster" in churches as young people are leaving in "droves." A 2011 Barna Group survey reveals that 59 percent of young people "disconnect either permanently or for an extended period of time from church life after age 15." This study records that 25 percent of them perceive that "Christianity is anti-science," and 23 percent have "been turned off by the evolution vs. creation debate." We should all be concerned with this shocking loss of faith. I disagree with Ken Ham who wants churches to teach more young earth creationism to the younger generation. In my opinion, this will only throw fuel on the fires already destroying the faith of our youth.

Historian William VanDoodewaard offers a historical argument for the existence of Adam. He asserts that "the mainstream, historic view of Christian orthodoxy" has always upheld the de novo creation of Adam, with Eve made de novo from his side, and that this occurred on the sixth day of creation. Of course, as an evolutionary biologist I have some issues. Humans share about 13,000 pseudogenes with chimpanzees; the best known is a similar defective gene for Vitamin C. Are we to suggest that on day six the Lord first placed these faulty genes in chimps, and then recycled them when he created Adam later in the day? A more parsimonious and less tortuous explanation is that humans and chimpanzees inherited these 13,000 genes from a last common ancestral population. With regard to the creation of Eve, did God remove the Y chromosome out of each cell from the flesh of Adam's side and replace it with an X chromosome before he fashioned her? Is the intention of the Word of God to reveal that the Lord was the first genetic engineer? I am doubtful. 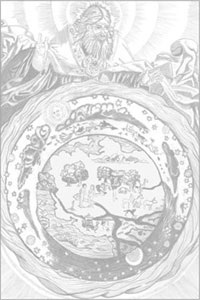 But let's return to VanDoodewaard's historical argument and apply it to a different scientific issue. Geocentricity was "the mainstream, historic view of Christian orthodoxy" up to the 17th century. For example, Luther embraced geocentrism, as the diagram from his 1534 Bible translation reveals. In his 1536 Lectures on Genesis he states, "Scripture … simply says that the moon, the sun, and the stars were placed … in the firmament of the heaven (below and above which are the waters) … . The bodies of the stars, like that of the sun, are round, and they are fastened to the firmament like globes of fire."

John Calvin was also a geocentrist. In his 1554 Commentary on the Book of Genesis he boldly asserts, "We indeed are not ignorant, that the circuit of the heavens is finite, and that the earth, like a little globe, is placed in the center … . The primum mobile [the final sphere] rolls all the celestial spheres along with it." Does VanDoodewaard want to appeal to the historical record in order to argue that 21st-century Christians need to accept geocentricity, since during three-quarters of church history it was "the mainstream, historic view of Christian orthodoxy"?

John Walton has been instrumental in assisting evangelical Christians to understand the necessity of reading the Word of God in the light of ancient Near Eastern literature. I completely resonate with his archetypal interpretation of Adam and Eve. If we cannot see that we are Adam and Eve, then we have missed completely the inerrant spiritual truths in Genesis 2-3. I do disagree with his thesis that creation accounts do not deal with material origins, but instead only functional origins. In my examination of ANE origins stories and a recent reading of David A. Leeming's two-volume Creation Myths of the World (2010), it is obvious to me that these accounts feature both functional origins and material origins.

Finally, I have a special kinship to Hans Madueme because we are both clinicians. He is a physician and I am a dentist. In his paper he raises concerns about methodological naturalism yielding a so-called "truncated science." Let me suggest that we would never have completed our respective MD and DDS degrees had we not embraced this assumption. In fact, if we ever attempted to practice our clinical sciences appealing to demons, angels, or divine acts in diagnoses or treatment protocols our professional associations would cancel our licenses. And if any patients were aware of such a clinical approach, I doubt they would darken the doors of our offices, including Christians. Methodological naturalism is a wonderful instrument. It has made us a healthier people, put humans on the moon, and revealed that the Lord created us through an evolutionary process.

Madueme also makes a rather alarmist claim. "The tapestry of salvation history extends between Adam and Christ; take away Adam and the whole thing unravels." The Bible speaks clearly of salvation. Acts 4:12 states, "Salvation is found in no one else, for there is no other name under heaven given to men by which we must be saved." Verse 10 identifies that this name is "Jesus Christ of Nazareth." Romans 10:9 also proclaims, "If you confess with your mouth, 'Jesus is Lord,' and believe in your heart that God raised him from the dead, you will be saved." I see no reference to Adam in these classical verses regarding salvation.

In ending his paper, Madueme leaves us with only three choices regarding the origin of evil: (1) dualism, (2) monism, and (3) "the rebellion of a historical Adam." But he conveniently overlooks a fourth option. Evil arose when a pre-human population began to bear the Image of God, became morally culpable before the Lord, and then everyone fell into sin (Rom. 3:23). By separating, and not conflating, the inerrant spiritual truth from the incidental ancient science of de novo creation in Romans 5:12, we can affirm that sin indeed entered the world, but not through Adam.

Denis Lamoureux is an Associate Professor of Science and Religion at St. Joseph's College in the University of Alberta, Canada. He is a self-described "evolutionary creationist" who lectures and writes widely on the topic. Lamoureux is the author of Evolutionary Creation: A Christian Approach to Evolution and I Love Jesus & I Accept Evolution.