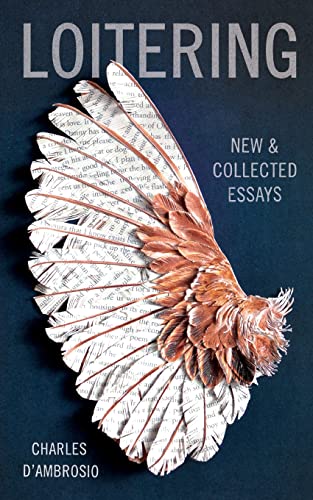 Essays that suspend judgment to make the case for compassion and understanding.
January 2015

"Writing an essay," Charles D'Ambrosio writes, "is a form of loitering—a lingering, a skulking, a meandering." His words resonated with me. Essays are a space to dwell, and the pieces gathered in his new book Loitering encourage the reader to slow down and linger with his prose. This book began some years ago as a small-run collection of essays entitled Orphans but has been expanded: in addition to the original essays, it now includes what D'Ambrosio calls their "estranged siblings" as well as newer work and a lovely preface on the power of essays. I first heard of Orphans from my husband. He, in turn, had heard an interview with Leslie Jamison, the author of The Empathy Exams, in which she praised D'Ambrosio's book. Armed with those recommendations, I looked for Orphans online but only found used copies going for over $90. I forced myself, then, to wait for the release of the reconstituted Loitering. Patience is not my virtue. I skulked. I read other books. I tired of waiting.

When I finally received a copy, I was drawn to the rough-edged pages. While reading I often paused to touch them; I even folded bottom corners to mark the passages that I want to return to without marring the appearance of the book. I want to loiter in D'Ambrosio's prose, sharing his precarious faith in humanity despite our blemishes and faults. I want to linger alongside him as he moves us through the trauma in the lives of his subjects and his life too. He knows how living (and dying) rends and breaks us, often in ways that we never can fully articulate, yet his essays attempt this articulation anyway. What we need to say is missing, but we still need to speak. D'Ambrosio keeps writing, and he manages to say what we need to hear.

His subjects are wide-ranging: whaling, suicide, Hell House, poetry, Catcher in the Rye, his father, his brothers, Russian orphans, bar regulars, money, Mary Kay Letourneau, utopia, manufactured homes, and journalists. He compassionately portrays life's hardness and complexity without giving into simple narratives and trite moralism. It would be easy to condemn the people who populate his essays, yet he refuses to do that. In "Documents," he catalogues his youngest brother's suicide, his other brother's attempted suicide, and his father's violence, mysticism, and mental instability. "My father and I had survived the same wounds," he writes. The pain and violence are stunningly intimate. It is hard to look; it is hard to look away. Rather than create a caricature of his father as a villain in the story, D'Ambrosio humanizes him. He invites sympathy rather than disgust. The essay proves more haunting because of that sympathy, not in spite of it. This is what D'Ambrosio does best: crafting complex essays that suspend judgment to make the case for compassion and understanding.

In "Casting Stones," he considers the media coverage and conviction of Mary Kay Letourneau, the former teacher who plead guilty to two counts of rape of a student. "She never told us what we wanted to hear," he writes. Letourneau didn't fit neatly into the narratives that journalists had ready-made for her. Her particular story collapsed under the weight of increasingly cartoonish characterizations, the ponderous vocabulary of experts, and stark judgments. This essay is not a defense of Letourneau but rather a defense of sympathy—a plea to recognize the humanity of another person. We lose something in the rush to cast stones, to pontificate. D'Ambrosio asks:

What kind of damage is done to our ability to love or understand and thus fully judge one another when daily we're encouraged to forget that people are people and view them as so much pasteboard, scenery, clutter, generalized instances (of murder, rape, of embezzlement, etc)? [emphasis mine]

Why can't we see people as people first? Why do we make people into objects instead? D'Ambrosio strives to see the humanity in those we would rather categorize, dehumanize, or otherwise dismiss. Attentive to the particularities of their lives, he resists the impulse to sever their humanity from them as a cowardly attempt to preserve some sense of our own.

D'Ambrosio even models sympathetic engagement when it is clear he doesn't really want to. In "American Newness," he tours manufactured homes and finds their imitation disquieting and hollow. More intriguingly, he's bothered that he cannot find "anything nice" to say about them. Their perfection lacks the weariness of real life, which is what he wants to see rather than staged lives in staged houses. What I've come to love about him is how he refuses to give himself a pass. He refuses to look away from his own conflicted feelings about the subjects of his essays. He is an unflinching critic of his own intentions and motivations. I wish more writers turned their criticism back on themselves.

Sympathy and doubt drive D'Ambrosio's essays. He notes that doubt and "the unknown" fuel the "the engine of the essay" as a form of writing. Ignoring that, or more deliberately severing the essay from its purpose, "leaves us with articles and theses, facts and information, our side and their side … but nowhere to turn in a moment of true need." Loitering is his attempt to bind us together by our doubts. In essay after essay, D'Ambrosio demonstrates that it is okay to not know. Wavering emerges as a virtue, not a flaw. He urges us to be nervous about the impulse to take sides, the assured conclusions that many offer, and the practiced apathy toward the suffering of others.

Writing an essay is a form of loitering, but life is also about loitering until we die. We can loiter with intent. Or, we can't. Most of us do varying degrees of both, but some of us struggle for an "apparent purpose," a proper motivation to guide us as we linger. We seek. We yearn. We find ourselves wanting. We doubt. We don't know. D'Ambrosio is there for those us who are still seeking a purpose. He offers us sympathy. He encourages us to remember that we are all human, particularly flawed. He encourages us to waver and to question. He provides the words that we can't speak. His essays never abandon us, his readers, in our time of need.

Kelly J. Baker is the author of The Gospel According to the Klan: The KKK's Appeal to Protestant America, 1915-1930 (University Press of Kansas) and The Zombies Are Coming! The Realities of the Zombie Apocalypse in American Culture (Bondfire Books). She has written for the Atlantic, Chronicle Vitae, Faith Street, Religion Dispatches, and the Christian Century's Then & Now. She can be followed on Twitter @kelly_j_baker.