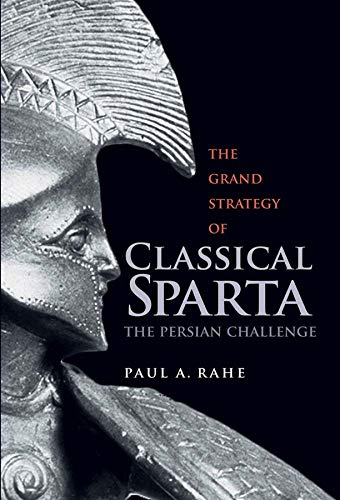 The Grand Strategy of Classical Sparta

A model for the West today?

All this, despite the fact that the city never had more than 10,000 citizen soldiers—and its political institutions were a bizarre jumble of three tribes in five villages, with each village providing one of the five ephors, who oversaw the city's two kings, as advised by a council of elders known as the Gerousia, whose laws were voted on by all male citizens over eighteen and then enforced by a kind of secret police known as the Krypteia. And the Krypteia, it turns out, were trained Spartan boys sent out to terrorize and murder Helots, both to encourage the other Helots to greater servitude and to teach the boys how to kill as they grew into full citizen soldiers.

As I said, a nasty and brutish set, but hard to beat in battle, as by the end of the Messenian wars the Spartans had turned a system of unified companies of spears and shields into an unrivaled force of phalanxes—unrivaled but limited by the necessity never to let Sparta get so deeply involved in external wars that the city could not prevent rebellion in its home territories. According to Herodotus, Sparta held seven times more Helots than citizens at the time of Plataea and Mycale, the land and sea battles that brought an end to Xerxes' invasion in 479. "Spartan policy," as Thucydides would later write, "is always governed by the need to take precautions against the Helots." Or, as Rahe's Grand Strategy of Classical Sparta puts it, Sparta found "an almost perfect match" between the heroic virtues taught by the Spartan system and the military requirements for Sparta's continued existence.

By the 6th century, Sparta had realized that its limited numbers would not allow expansion of its Helot system into the Arcadian territories to the north, and it's at that point we reach the strangest part of the story. Sparta could not survive the conquest of further land, but neither could it tolerate some other power—Argos, Thebes, Corinth, even fairly distant Athens—dominating Arcadia. Dominating any significant tranche of Greece, for that matter. Sparta's system left the city too small to rule Greece, but that same system demanded that no other city be powerful enough to invade Spartan lands and set off a Helot revolt. Simply as a matter of necessity, Sparta began a policy of supporting the independence of the smaller Greek cities against their larger neighbors—and a policy of supporting popular rebellions against local tyrants who might attempt to make militaristic states out of Greek cities.

Even Athens benefited, as the Athenians expelled their tyrant ruler Hippias in 510 B.C. with the help of Cleomenes I, one of the dual kings of Sparta. Admittedly, the unscrupulous Cleomenes had plans to put his own puppet in Hippias' place, but beggars can't be choosers, and the Peloponnesian League, the group of allies organized by Sparta, halted his machinations with a refusal to join any further campaign against Athens.

It was perhaps the oddest era of Hellenic affairs, as Sparta, the most brutal slave state of Greece, became widely heralded as the great defender of liberty, the great opponent of tyranny, and the great champion of all that was considered authentically Greek culture and Greek virtue. And as a survival strategy, it worked wonderfully—until a man named Darius, great king of Persia, became annoyed with the obstreperous Greeks in the islands and coasts on the edges of his rule. In 492, Darius undertook an invasion of Greece, and Sparta was trapped by its own reputation into becoming, with Athens, a defender of Greek autonomy against the largest empire in the known world.

Darius was stymied by the improbable Athenian victory at the Battle of Marathon in 490. His son Xerxes tried again in 480, and initially found more success. Both the Greek attempts to block Xerxes—holding the Persian army at Thermopylae and the Persian navy at the Straits of Artemisium—failed, and Xerxes swept through Boeotia and Attica, capturing and burning Athens along the way. But the Greek ships, led by the Athenians, somehow managed to decimate the Persians at Salamis and the next year at Mycale, while the Greek phalanxes, led by Sparta, broke the Persian land forces at Plataea—ending the invasion of Greece.

Paul Rahe's telling of all this in The Grand Strategy of Classical Sparta is masterful, as he traces the Spartan portions of the story from Darius' initial exasperation with the Ionians all the way down to Xerxes' final flight back to Persia in terror. Particularly interesting is Rahe's account of Sparta's role in the formation of the Hellenic League that would band together to fight the second Persian invasion, and he shows what close-run things all the battles of the war really were.