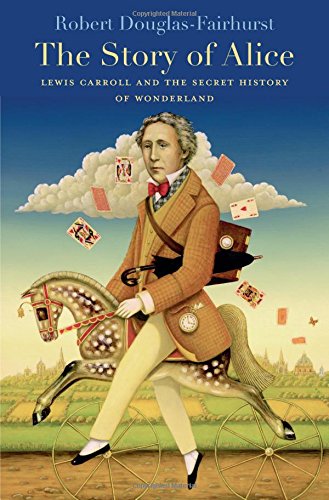 The Story of Alice: Lewis Carroll and the Secret History of Wonderland
Robert Douglas-Fairhurst
Belknap Press: An Imprint of Harvard University Press, 2015
496 pp., 33.66

In the ritual formulation introducing this annual reckoning, I emphasize that these are not the "best" books of the year, however those might be determined, but rather the books that come most readily and insistently to mind as I think back. My recollections are unsystematic, and a list done next week might be different from today's. (I have a piece forthcoming in First Things in which I talk about some of these books at greater length.) As always, I'd love to hear from you about this list, and especially about the books of 2015 that stand out in your own reading.

After the Circus, translated by Mark Polizzotti; Paris Nocturne, translated by Phoebe Weston-Evans; and So You Don't Get Lost in the Neighborhood, translated by Euan Cameron. Patrick Modiano. These are my favorites among the newly translated novels by the 2014 Nobel Prize-winner that appeared this year.

Dark Corners. Ruth Rendell. This novel was completed before Rendell's death earlier this year at the age of eighty-five. It's superb. (How characteristic of her sly wit that the title, which sounds as if it had been generated by a Generic Crime Novel algorithm, is taken from Shakespeare.)

Map: Collected and Last Poems. Wislawa Szymborska. Translated by Clare Cavanagh and Stanislaw Baranczak. The lifework of the 1996 winner of the Nobel Prize in Literature. Here is Hannah Faith Notess's B&C review.

Maze of Blood. Marly Youmans. A novel inspired by the life of the great pulp writer Robert E. Howard, creator of Conan the Barbarian, with a gorgeous cover and illustrations by Clive Hicks-Jenkins.

Report to the Department of the Interior. Diane Glancy. Meditating on "Indian education" with anger, sadness, mordant irony, and hope.

St. Aldhelm's 'Riddles.' Translated with commentary by A. M. Juster. Riddling poems by a prominent Anglo-Saxon churchman, written in Latin. Here's my review from Printer's Row.

Slow Pilgrim: Collected Poems. Scott Cairns. One of America's finest poets is a convert to Orthodoxy who travels now and then to Mount Athos.

The Speechwriter: A Brief Education in Politics. Barton Swaim. All you need to prepare for the rest of the 2016 presidential campaign. Best read with bourbon.

Werewolf Cop. Andrew Klavan. The question at the heart of this novel: "Do you believe?" Here's my review.

The Witches. Stacy Schiff. The best book I've read on the Salem Witch Trials. I did a mini-review for Christianity Today magazine.

Book of The Year