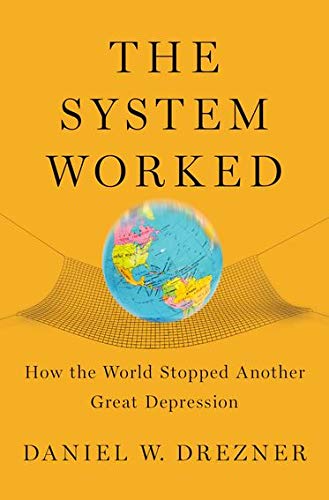 Or, Don't Panic: You and the Global Economy.

Drezner's argument is simple: despite the potpourri of public punditry on the calamitous state of our international financial institutions, these institutions did—by and large—weather a very nasty storm, a storm that did less damage than it would have without them, and these institutions are better for it. In other words, the system worked.

Notice Drezner is not saying "all is well." All is clearly not well in the global economy. But in systems and institutions, wellness is not measured by abstract perfectibility. Success in politics is measured by making things better than they were. "Looking for perfection in global governance," waxes Drezner, "is the enemy of finding the good in global governance." To say that international economic governance has been tested, tried, found wanting in so (so) many ways, is not the same as saying it failed. In the stress-test of the Great Recession, he argues, global economic governance "passed," even if it's still not the kind of report card you'd want to bring home.

American attitudes on global governance structures prior to the financial crisis were already trending down. These institutions were equally hated by the left and the right: the left because of the rapacious reputation international financiers had for exploiting the poor, the right for the prospect that multilateral organizations might somehow override questions of national jurisdiction. Put a Tea Party Republican and a social justice Democrat in a room together and the one thing they can probably agree on is that they hate the IMF.

Drezner reminds us that the world's highest growth economies during (and now after) the Great Recession are in the developing world; they're in Africa, in the Middle East, and in Southeast Asia. These economies recovered more quickly and posted higher growth rates; while the German economy poised on the brink of contraction, and the Greek economy collapsed completely, sub-Saharan Africa was posting average rates of return for the pre-recession world, phenomenal rates of growth for the post-2008 world. But to hear tell of the Great Recession is rarely to get the global story. Authors based in the United States and Europe were responsible for approximately 93 percent of scholarly articles on the Great Recession. The American recovery was weak, so it was presumed that global governance utterly failed. But the first thing can be true and the second false.

Let's talk development. In the Great Depression, global economic output shrunk by about 3 percent in 1930, and then contracted at annual rates of about 4 percent for the next two years. Contrast this, in 2009, to the IMF's World Economic Outlook, which charts global economic output about 0.59 percent lower, followed by 5.22 percent growth in 2010 and 3.95 percent in 2011. Not only is this growth on par with rates in the decade preceding the financial crisis, it is growth that is meaningfully reducing poverty, partly because (as we've already seen) the most ambitious growth rates are largely to be found in the developing world. Writes Drezner, "in the teeth of the Great Recession, the World Bank reported that the first Millennium Development goal of halving the 1990 levels of extreme poverty had been achieved ahead of schedule." The United Nations' own Development Program reported that despite the 2008 crisis, development since 2001 has far outstripped that of the 1990s, in part because developing economies had greater access to global markets. Is the world still wracked by fundamental and systemic economic injustices? It is, but those injustices are fewer today than they were in 2010, than they were in 2007. That is something.