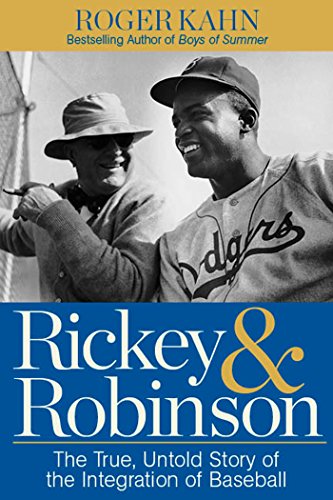 The Integration of Baseball

A story that never gets old.

The final weekend of March hit hard in West Michigan, with the temperature in the mid-teens on Palm Sunday morning, and a snow flurry punctuating our neighborhood Easter-egg hunt. With Michigan State making an unlikely run to the Final Four, and the Pistons and Red Wings clogging up the sports radio airwaves at night, it was hard to remember the 'Boys of Late Winter' at work in Florida and Arizona, in the heat (both drizzly and dry) and sunshine, meteorological realities exiled from our northern climes. In short, I cried out "Bring the boys and the sunshine back north!" And indeed, once again, Opening Day (this year contiguous with Easter Sunday) arrived with fair and promising weather, albeit this year with a touch of sadness as the first pitch of the season was thrown at Wrigley. Yes, boy wonder GM Theo Epstein's great experiment with the Cubs is reputedly ready to reap a harvest, and the arrival of over-achieving manager Joe Maddon from Tampa has the Northsiders all astir. But the sadness lingers, because, for the first time in six decades, the Cubs begin a season without the dignified presence of their living emblem, the great Ernie Banks, who passed away earlier this year. When the shy young Texan arrived in Chicago in September of 1953, he represented the very middle of the long and arduous integration process in baseball—he came in 6 years after Jackie Robinson broke the color line with the Dodgers, and 6 years before the Red Sox brought in Pumpsie Green, so that finally every big-league club was onboard. It seems fitting that Ernie was quietly in the midst of this culture-shaking process, proving himself with his performance (two MVP awards, over 500 home runs) and with his love for the game ("Let's play two!") in a tough and at times racially conflicted city. So long and thank you, Mr. Cub.

But the good-byes for historic Chicago ballplayers were redoubled this spring, and echoed across the Southside as well, as Banks' death was followed soon after by the passing of Minnie Minoso, who became the first black player for a Chicago team more than four years prior to Banks, when he took the field for the White Sox in 1949. This great Cuban star (and the burgeoning presence of Cuban players in the big leagues will play a decisive role in my predictions for this year!) is perhaps best-known as the only player to see action in five decades (he was brought back for a publicity stunt in 1980, long after his retirement). But this nine-time all-star had a solid career, with just under 2000 hits and over 1000 runs and RBI's in his career. And so all of Chicago mourns the loss of its baseball pioneers, but perhaps these seeds, long dormant, will sprout up in the eternally deferred dream, the 'All Chicago, L-Train Series' for which Minnie and Ernie would have longed!

Before we get to belated prognostications for the 2015 season (those will come in the second installment of this report), a few more words on the inexhaustibly stirring topic of the integration of baseball. Roger Kahn is a venerable journalist and writer of perhaps baseball's consummate elegy, his award-winning 1972 volume The Boys of Summer, telling the inside story of the early-50s Dodgers, whom he covered as a young reporter. His latest book, Rickey and Robinson: The True, Untold Story of the Integration of Baseball (Rodale, 2014), is a deeply personal, and at times scathing, archaeology of baseball's greatest hour. Kahn, a lifelong Brooklynite, is now in his mid-eighties but apparently as sharp as ever.

The book is a quirky collection of anecdotes and evidence, including a number of verbatim transcriptions of columns and editorials from the 'Golden Age' of New York newspapers—indeed, the theme of journalistic scruples seems at times central. I got the feeling that this book was Kahn's chance, at last, to 'set the record straight.' Though he only covered the Dodgers for a few years as a beat writer, Kahn's work with the New York Tribune in the early '50s was formative, and his tone here is often elegiac: "In memory I cherish the Tribune and my gifted, cultured colleagues in the sports department. Al Laney, once an assistant to James Joyce. Ed Gilligan, who led me to the novels of Thomas Hardy. The warm, delightful Red Smith, who liked to call his widely popular column 'my daily spelling lesson.' The Trib as more than just a newspaper I worked for. It was my university."

But generally speaking, the 'fourth estate' of journalism was, in Kahn's estimation, the foremost opponent to the breaking of the color line in baseball. Part of this was the harshness of the New York Daily News and its tandem of Jimmy Powers and Dick Young. For both of these writers, the attack on Branch Rickey was predicated on his penury regarding the control of vast numbers of minor leaguers, a system Rickey pioneered with the Cardinals of the 1930s: "Some called the farm systems 'chain gangs,' and one columnist, Jimmy Powers of the New York Daily News, almost drove Rickey out of baseball in 1950. Powers was a resolute reactionary and a closet anti-Semite—in short, an unappetizing character—but he championed the salary rights of individual ballplayers with enduring passion… . [This] seemed to blind Powers to the nobility of Rickey's highest calling: integration. Thus Rickey's crusade in Brooklyn proceeded without the support of New York's most popular newspaper." Even more savage and persistent were the attacks of Young, especially regarding Rickey's salary negotiations with Dodger players. During the 1948 negotiations with young and ill-fated pitcher Ralph Branca, Young chose a perverse metaphor: "This morning Ralph Branca will enter the gas chamber for a second exposure to Branch Rickey's oratorical fumes."